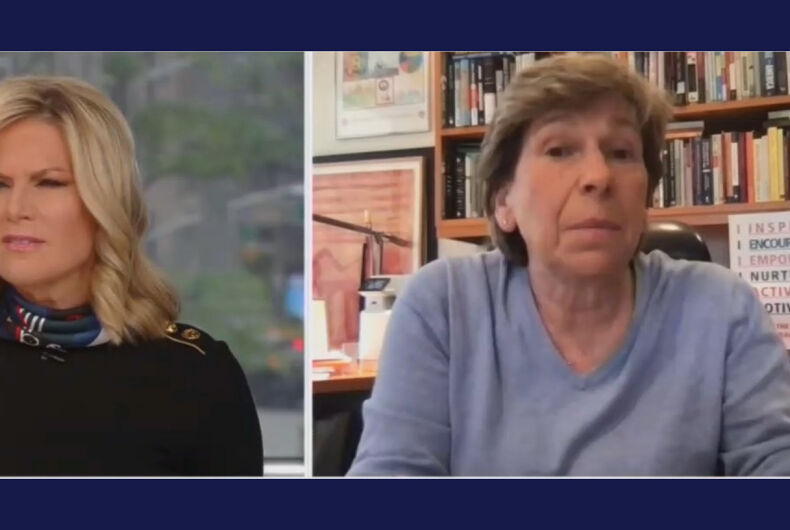 Randi Weingarten, the out president of the American Federation of Teachers, was on Fox News to discuss education about racism in schools.

Much to host Martha MacCallum’s chagrin, however, Weingarten was not afraid to target reporting that she considered actually harmful to educators: Fox’s support of election conspiracy theories and disinformation.

The right-wing news network planned for the segment to discuss Weingarten’s support of the 1619 Project in the classroom, which Fox News has deemed controversial because, according to the project’s description, it puts “the consequences of slavery and the contributions of Black Americans at the very center of the United States’ national narrative.”

MacCallum asked about “critical race theory,” claiming Weingarten’s support of the 1619 Project was “wrong… as a historian, to want to teach” in classrooms.

“If you’re really talking about misinformation now, Martha, and I hope you are, I really would hope that Fox would really look at what happened in this election and how we can – because every social studies teacher is wrestling with this – discern fact from fiction,” Weingarten said. “We have to do that as social studies teachers.”

MacCallum cut her off and said that it’s “quite clear” that Joe Biden is president and said that she’s “not sure why you are so concerned about that.” She got angry and defensive since Fox News is getting sued over their allegedly false coverage of voter fraud that promoted conspiracy theories.

Weingarten responded, “I would hope that Fox would be just as focused on, ‘Let’s get rid of the misinformation about what happened in this election.’ This election was freely–”

MacCallum tried to cut her off, rolling her eyes while Weingarten patiently waits to respond.

“Oh come on, Randi, this is not the topic that we’re here to talk about,” she said. “That’s a dodge! Okay?”

“Children in this country… We rank 36th in math… that’s about midway!” MacCallum complained, apparently trying to bring the discussion back to the 1619 Project by discussion math education instead of history.

Randi Weingarten uses her appearance on Fox to bring up misinformation from the network on the election pic.twitter.com/q42pquq8xW

"Oh, c'mon, Randi. C'mon. This is not the topic that we're here to talk about. I'm not gonna talk about that" — Fox News host Martha MacCallum is triggered when Randi Weingarten responds to a question about the 1619 Project by alluding to Fox News's election misinformation pic.twitter.com/wkPTeacdA6

In another clip, MacCallum keeps reminding viewers about Fox’s part in spreading disinformation, this time about the coronavirus pandemic.

The conversation turned to protocols schools should follow to ensure that students and teachers can return to class safely. Weingarten again called out Fox for spreading disinformation on the topic.

“I would hope that Fox would [say] what everybody else in public health is doing, which is, ‘We have to get our kids vaccinated once the vaccination is ok.’ I would hope Fox says to all of these people that don’t want the vaccines, that think there’s a problem, ‘Why don’t you and I do things together to get our kids back to school?’ This is what we need to do,” Weingarten said in an attempt to unify on the topic while MacCallum shook her head.

MacCallum responded: “The CDC said it wasn’t required for teachers or for children to be vaccinated to go back to school.”

“Every family across America is going to make that decision about their children, we know this is going to be widely available for them, which is great.”

She did it with vaccines too pic.twitter.com/tSvEuU0QV1

Weingarten has been the elected president of the AFT since 2008, and the group has over 1.6 million members. She was previously president of the United Federation of Teachers (UFT), the largest teacher’s union in New York City. She is also a lawyer and was UFT’s lead counsel for years prior to becoming a teacher and union leader.

Her election as AFT president made her the first out leader of a nationwide union. Weingarten came out in 2007 and is married to Sharon Kleinbaum, a rabbi, since 2018. She was a rumored candidate considered by the Biden transition team for Secretary of Education.

We’ve worked with the CDC for months to make sure schools have the testing & safety mitigation measures to stay safe. This isn’t news. It's yet another attempt to demonize educators & distract from the task at hand: Stopping the spread of #COVID19.  https://t.co/N5llNSz5T4

I'm grateful we live in a nation that sees how to make itself better. That's what we try to do through education. And by presenting children with the facts, we can learn from our past to improve our future.  https://t.co/hz0bLZCuhM