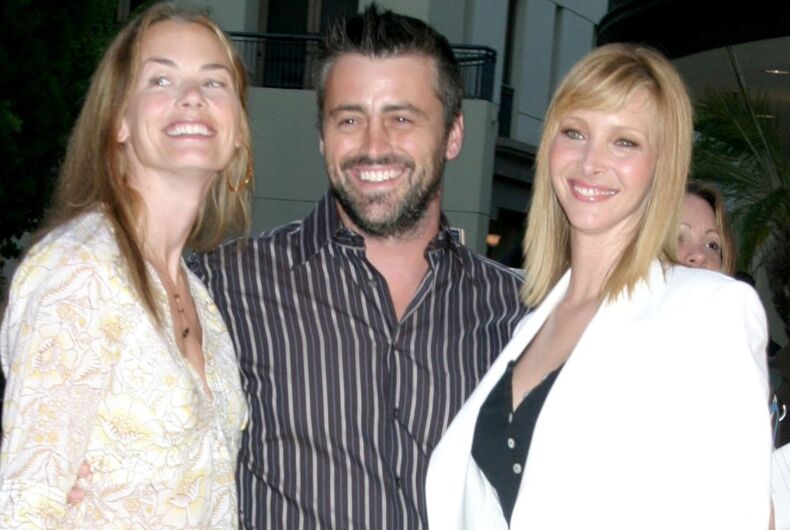 A joke about Joey Tribbiani being gay was cut from an episode of Friends, an early version of the script revealed.

The magazine Grazia U.K. reported that a draft script for the season four finale, “The One With Ross’s Wedding,” had a joke in it where Phoebe said that Joey is gay. The draft was published as part of a book on the series.

Related: Was Chandler from “Friends” meant to be gay? It seems he almost was.

Talking with Phoebe in New York City, she eventually realizes that she’s still in love with Ross.

“Why didn’t you tell me?” Rachel asks.

“We thought you knew. It’s so obvious. Or, like, you know, ‘Monica likes things clean,'” Phoebe quips. In the aired version of the episode, that’s where the scene ends.

But in the draft script, she adds another joke: “Or ‘Hey, Joey, you’re gay.'”

That joke was cut and some additional dialogue was added before the line about Monica liking things clean for the final version of the episode that aired.

Friends has faced criticism in recent years due to the show’s negative portrayal of LGBTQ people, including the dehumanizing way Chandler’s transgender parent was treated, the immature lesbian jokes Ross’s ex-wife Carol was the butt of, and the constant fear male characters in the show lived in of being thought of as gay, causing them to fear and laugh at boys and men who dance, take care of children, or play with dolls (gay, gay, and so gay that it’s OK to be mean to your own child over).

What’s unusual about Phoebe’s cut joke is that it was usually Ross and Chandler who were suspected of being gay, not womanizing Joey. And perhaps that’s why the joke didn’t make the final edit: it’s possible that Joey’s entire character was a carefully constructed facade for a closeted gay man, but that’s a long, arduous path for a sitcom to go down just for a rather un-funny zinger that isn’t even needed because it immediately followed one that made the same point.

Pride in Pictures 1960s: How a group of angry bar patrons launched a movement