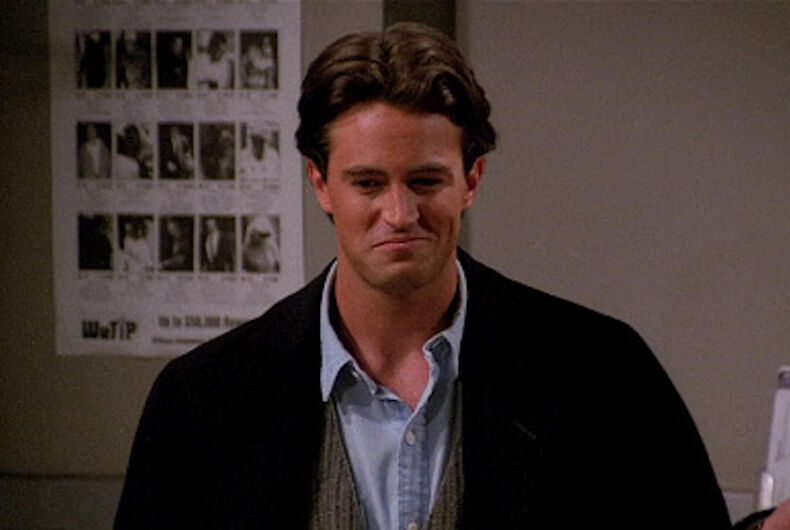 How close did the people behind the hit show Friends come to making Chandler gay? Surprisingly close.

Chandler could have had the most prominent gay character in television history… until the show’s creators decided to straighten him out.

Related: Kathleen Turner played a trans character on “Friends,” but she says she wouldn’t do it now

Friends was one of the most popular TV shows in history, running on NBC from the mid-90s to the early 2000s. It was about six twenty-something Gen-Xers living, laughing, and loving in implausibly large Manhattan apartments, and it was a lot less shy than other shows of the time about doing gay episodes.

Matthew Perry played the character of Chandler. He’s smart, he’s funny, he’s sarcastic, he’s unlucky in love, he’s well dressed — and he was believed to be totally gay, both by characters on the show and by people in real life. To understand why, look no farther than Season 1, Episode 8, “The One Where Nana Dies Twice.” The episode first aired in November of 1994, and begins with one of Chandler’s coworkers trying to set him up on a date with a man.

As soon as they realize what’s going on, they’re both mortified. Chandler goes to his friends and asks if they ever thought he was gay, and learns that they all thought he was. And they’re not alone, because when this episode aired, a lot of viewers thought he was gay as well.

That probably has something to do with how the character was first conceived. In the early development of Friends, creators Marta Kauffman and David Crane “entertained the possibility that Chandler could be gay,” according to interviews published back in the 1990s.  But in the end, Chandler was made straight because, Crane says, they cast a straight actor in the role.

If they’d gone with a gay actor, he said, they might’ve stuck to the gay plan.

But that wasn’t the end of it. Instead of having the character be gay, they decided instead to have everyone just think he’s gay. Writers were told to “write it gay and play it straight.”

Audiences noticed — oh boy, did they notice. Viewers may have been primed to notice gay characters in the mid-90s because they were increasingly visible on the news and talk shows. There are tons of articles from the show’s original run period about how gay Chandler seems — so many interviews where they have to very patiently explain, no, he’s not gay, really.

The show loved dropping little gay hints about Chandler. In that season 1 episode, after his friends all tell him that he has a gay “quality,” Chandler finds his coworker so he can make sure she knows he’s not gay. Then, she happens to mention that she was going to set him up with a nerdy guy named Lowell. Chandler is insulted that she wasn’t planning to set him up with the office hottie, Brian. It’s another example of writing it gay, playing it straight.

But if Chandler had been gay — written gay, played gay — would the show have been funnier? Would that have let them tell better stories?

Well, take a look at what happens next in this episode: At this point, Chandler’s running out of people to tell that he’s heterosexual. He winds up at a funeral, for sitcom-plot-related reasons, and tries to hit on a woman. But he’s interrupted by his friend Ross, who for other sitcom-plot reasons has taken painkillers, which has loosened him up. Ross interrupts Chandler’s flirting and tell him he should be gay.

What’s weird about this is that there are a lot of good jokes to tell about being queer. Homosexuality can be funny! Queer comics were telling good jokes about being queer at the same time that Friends was on. For example, Scott Thompson on Kids in the Hall, and gay comic Bob Smith.

But Friends even seems to go out of its way to avoid any other gay joke. In the final scene, Chandler’s left by himself to mutter angrily that nobody tried to set him up with hot Brian. Brian overhears him, once again embarrassing Chandler. It’s a funny gag! But the writers just keep telling the same joke.

It would have been a huge milestone if the creators of Friends had gone ahead and made one of the friends gay. It was such a popular show — if it could compel millions of Americans to change their hairstyles, imagine what it might have done to public attitudes about homosexuality.

But ultimately, it’s hard to say with confidence that they could have pulled it off.

People are blaming Lil Nas X for his mother’s addiction. His dad is defending him.