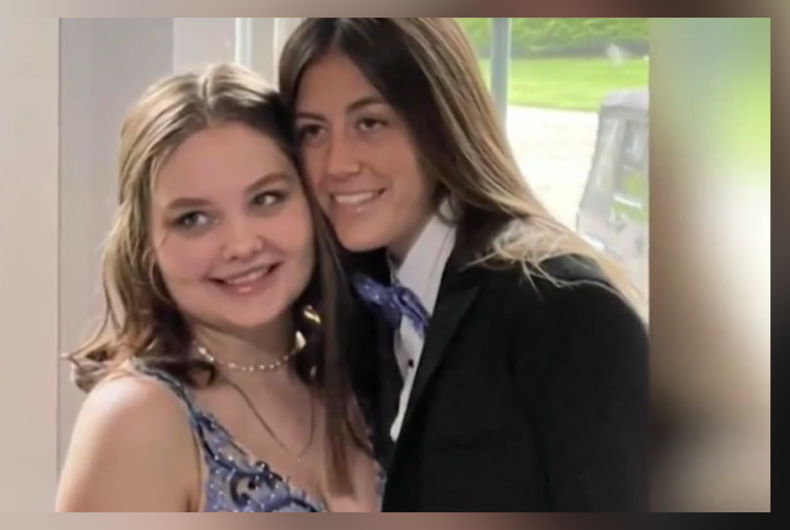 Riley Loudermilk (left) and Annie Wise (right) were elected prom queen and king respectively, the first at Kings High School and in the school's district.Photo: Screenshot/WX

Annie Wise and Riley Loudermilk were just two seniors, going to the prom for Kings High School in Kings Mills, Ohio, together as a couple. But “usually prom king and queen is like a popularity contest, and neither of us are really on that popularity spectrum,” Loudermilk said.

Or at least, so she thought, because the senior class of hundreds of students voted the couple to the prom court. Unfortunately, their joyous victory has been marred by anti-LGBTQ people and others rallying against other, unrelated issues they take with the small town’s only high school.

Related: Catholic high schools rebel after school board tells them they can’t fly the Pride flag in June

Wise and Loudermilk, both 18, started dating six months ago. They are the first queer couple elected to the prom court in district history. Wise was named king and Loudermilk was named queen.

Amidst “a lot of screaming and jumping” from friends, Wise said, “my crown fell off and it broke. There was a lot going on, but it’s something I’ll never forget. It was amazing.”

“It took me forever to find this suit that I wore, because there’s like no tuxes for girls in all of Southwest Ohio,” she added, “but the response that I got from it is amazing.

“I’ve gotten people from our school saying that they’re more comfortable being gay at Kings. It made it all worth it.”

Amongst their peers and families, Wise and Loudermilk were celebrated for their win. No one took issue at the event.

Afterwards, when the school shared the prom court in a post online, parents and other residents got into an uproar. Some would even attend the next school board’s virtual meeting, with one parent strangely making the teen’s presumed genitalia the topic of discussion.

“Sorry, but I believe that there are still two genders, a male and a female,” the unidentified parent claimed. She then ‘explained’ further, saying that “I think tradition stands for a queen that has a vagina, a king that has a penis and testicles. Period!”

Others complained that was the latest move by the school’s “radical” staff to push students into being LGBTQ-affirming, citing that teachers at the school also teach “racist” curriculum that acknowledged the history of slavery and anti-Black racism in America.

Another used the opportunity to claim that it’s “been brought to [her] attention” that a teacher “flies not only the [Black Lives Matter] flag, but also a gay pride flag, [but] refuses to fly the American flag.” Someone else then voiced “additional” concerns about the book Stamped: Racism, Antiracism, and You, a New York Times-bestseller, being taught and used in classroom curriculum.

Some of Kings Mills’ residents’ remarks are not surprising, considering that was the hometown of Leelah Alcorn, a trans teen who committed suicide at age 17. Alcorn attended Kings Mills High School. Her death rocked the community and spurred several LGBTQ advocates to stand more strongly and openly for trans youth.

Alcorn had came out as trans to her peers and school community, and many had accepted her before she was pulled out of the school by her non-affirming parents. She was subjected to conversion therapy and was shamed by “Christian therapists.”

Still, in the end, the district said there’s nothing to be done regarding the prom court. The students voted and chose Wise and Loudermilk on their own, and the entire issue was considered moot.

“The queen and king that were nominated and won were thrilled, they were so excited and they feel so supported at school,” Gould said. “What is great is it shows a lot of the character of our students at Kings High School. They’re inclusive and they get it.”

The district also noted that while many commenters were negative, the majority of them were positive in the end. Especially after they began deleting bigoted, uncalled for remarks.

Loudermilk and Wise’s parents were understandably not happy that other parents derided their children for being them, and made comments about their genitalia.

“It also just was kind of surprising that a bunch of adults were bashing teenagers,” Loudermilk said. “It made me mad that adults were commenting on a high school dance,” her mom, Traci, remarked.

“I just think it’s weird that somebody who’s old enough to be my mom is so worried about my genitalia and what’s in my pants,” Wise said about the parent’s remark. “I think that’s more concerning than having a gay couple win prom, obviously.”

In the end, though, they have still enjoyed their special moment.

“A lot of those conservative people’s kids voted for us, and I just think that’s really cool that kids are learning on their own and not just taking all their information from their parents,” said Wise to NBC Out.

Loudermilk added, “I do hope it kind of just helps people realize that it’s OK to come out, and it’s also OK to come out at your own pace in your own way.

“You will get hate from it, but there’s also a really big chance that you’re going to get so much love and support, like we did.”