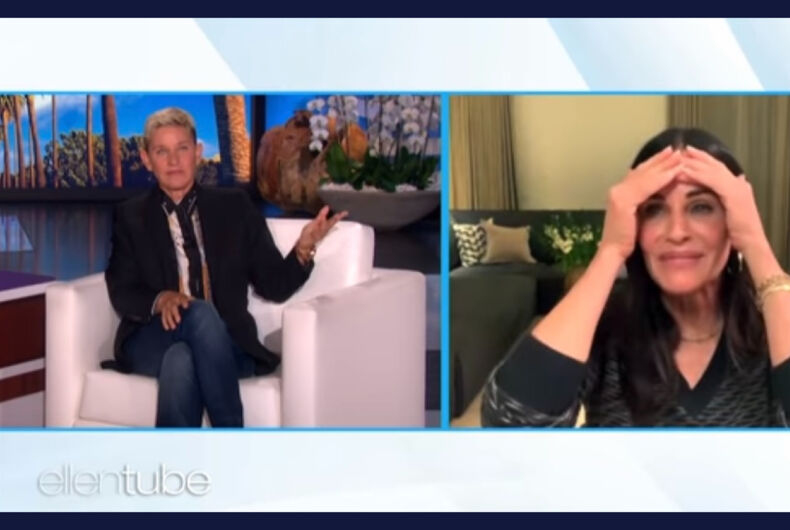 Rumors that Ellen DeGeneres is having problems in her marriage to Portia de Rossi have been refueled by the revelation that Ellen is currently living with Courteney Cox.

On a recent episode of her show with Cox as her guest, Ellen explained why, jokingly noting, “I’m not living with Courteney Cox because I’m kicked out of my house.”

Related: Watch Ellen open up about her marriage & being soul mates with Portia de Rossi

Cox, who starred in the hit sitcom Friends as Monica Geller, appeared on Ellen’s show to discuss the upcoming reunion special which will be released by HBO Max sometime this year. She also currently hosts Nine Months with Courteney Cox on Facebook Watch.

Ellen, who was starring in her self-titled sitcom when she came out — both in the show and real life — in 1997, mentioned her current living arrangements when introducing Cox on her current daytime show.

“The world knows our first guest from a little show called Friends, but currently, I just know her as my landlord. Please welcome Courteney Cox,” Ellen said.

“We don’t see each other a lot, but we’re roommates. How am I doing as your roommate?” Ellen asked.

“I was ready for you,” Cox said, mentioning she cleaned up the house to welcome Ellen just to return to their home and find that “Ellen’s toothbrush is on my side!”

“So essentially, you’re a terrible roommate,” Cox determined. “You took over my side and your side.”

“No, that was Portia who took over your side,” Ellen said. “I only have one side, and she happened to be there one night…”

She then explained, “I’m not having marital problems… we sold our house here in Beverly Hills, and you were kind enough to say yes, stay at my house.”

Ellen noted to Cox, “your makeup is still there, there was only one toothbrush on that side.”

Ellen then shared exclusive footage of her in Cox’s house, going through her cabinets for “office supplies.” While looking for them, she found “undies for two” and a puppet that “sort of looks like me.”

Cox decided to escape from Ellen’s home and go to London to stay with her boyfriend, musician Johnny McDaid.

Last year, Ellen’s home with Portia de Rossi was robbed while she was in the middle of taping in her home studio. In 2017, they evacuated their mansion as a wildfire threatened to burn it down.