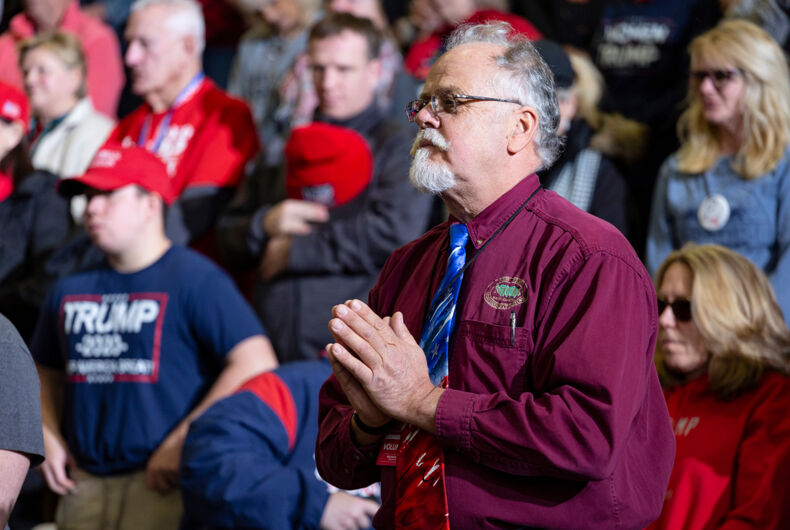 Historical research is not limited to countless hours in library archives sifting through musty paper that hasn’t seen the light of day in countless years. Depending on the specifics of your field, you might also interview folks and do other things that involve interacting with things other than paper.

But if you’re not up for some time in some archives, you might want to think of another field of study.

Related: An anti-trans GOP lawmaker tried to justify himself with “science.” He failed miserably.

Often it takes a while for the product of that research to gel even to a point where the historian can see what is going on. But sometimes there are moments that make you want to jump for joy and scream (though you don’t because you’re in a library and you want to make sure that you can come back to that library in the future).

One of those happy moments came in Lansing, Michigan a few years back when, among the correspondence files of Gov. William Milliken (R), I found a 1978 letter from an Ohio trans woman asking for the text of the then-recently passed Michigan trans birth certificate statute.  (The significance?  She said she was inquiring to give the language to her state representative, who introduced a bill the following year. Of course, if you’re from Ohio, you know the end of that story: it did not become law.)

Another happened in Forest Grove, Oregon at the library of Pacific University – but the happiness was short-lived.

I was exploring the papers of Vic Atiyeh, the first U.S. governor of Syrian descent.  A Republican, he served as Oregon’s governor from 1979-87, meaning he was in office in 1981 when the state’s legislature passed a trans birth certificate bill.

At the time I was in Forest Grove, I already knew more about Oregon’s birth certificate statute than is available about most that passed during that era.  Audio recordings of state legislative committee hearings are available, so I’d heard H.B. 3098 presented to a House subcommittee by its author, State Rep. Mae Yih (D).

She had introduced the bill on behalf of one of her constituents who was having trouble securing a birth certificate change under existing law.  One subcommittee member asked her what was actually in the bill and Yih offered one of the clearer, more concise summations of the impact of a birth certificate statute that you will ever encounter: “This bill would allow for a change of the legal sex of the person.”

The recording also included testimony from the trans woman herself, a representative from the ACLU, and the state registrar, who said his agency supported the bill even though his agency hadn’t had a hand in authoring it.

In the Senate, the bill faced a Justice Committee chaired by State Sen. Jan Wyers (D).  Two years earlier he had opposed an LGB rights bill, asserting that, while he favored civil rights generally, he nevertheless felt as a remedial issue it should be limited to matters of racial discrimination. But he viewed H.B. 3098 bill to be “uncontroversial.”

After a presentation by Yih, he even asked the ACLU rep and Yih’s trans constituent if they’d be offended if the committee just passed the bill without going through the motions of taking their testimony.

They acceded to his request.

On the Senate floor, conservative Hood River Republican Ken Jernstedt carried the bill and spoke in favor (though he did ask his colleagues to not ask him any questions about it).  The only quasi-transphobic incident came from North Bend Democrat Jack Ripper who cast his vote in what was described as an “unusually high-pitched” voice.

I knew that the organized Oregon LGB(T) political machine of the day saw it as a good thing when Atiyeh signed the bill (though the fact that it was unfamiliar enough with trans law to state that only two other states had such legislation at the time seems a bit odd even four decades on).

But I didn’t know if Atiyeh, who had opposed adding sexual orientation to a hate crimes bill that same year, was an enthusiastic supporter of the bill or had just offhandedly signed it without really paying attention to it.

Then I saw a notation in the governor’s records indicating that H.B. 3098 was slated for a special bill signing ceremony.

Here, insert the part where I’m having to restrain myself from jumping for joy.

Of course, this is an instance where that restraint turns out to have been warranted for more than just reasons of scholarly decorum.

The notation did indeed say that H.B. 3098 would have a ceremony – but it also said that the bill involved special education. There’s no way to spin trans birth certificates into special education, so something was amiss – and it was.

That would seem to be an easy mistake to make for whoever was making the notations about the meanderings of a governor’s schedule – and ultimately a harmless one, for forty years on, the only bad news is that there was no special signing ceremony for one of the five birth certificate bills passed in 1981.

The good news is that H.B. 3098 did pass and it was signed into law.  After all, it isn’t the signing ceremony (or lack thereof) that anyone points to in order to get a court to sign off on a birth certificate request, it’s the law itself.

Everything else is gravy.

Sometimes there’s no gravy to go with the (historical) meal, and this is one of those instances where that’s okay.