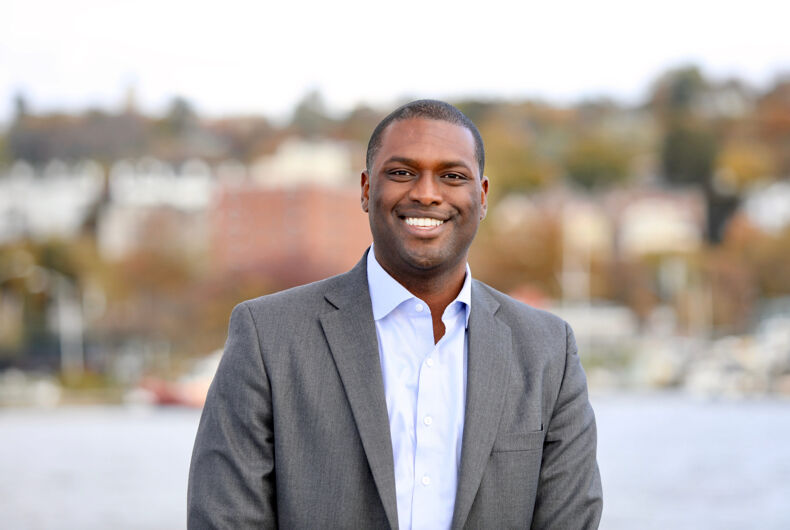 Out Rep. Mondaire Jones (D-NY) drew sharp criticism from his Republican colleagues after calling out their arguments against D.C. statehood as “racist trash.”

“I have had enough of my colleagues’ racist insinuations that somehow the people of Washington D.C. are incapable or even unworthy of our democracy,” Jones said.

His comments were made in a heated exchange in the House of Representatives with Republicans as the chamber considered a bill to make the District of Columbia the 51st state. The city does not have representation in Congress despite having a larger population than several states, a situation that advocates label “taxation without representation.”

Sen. Tom Cotton’s (R-AK) said that D.C. shouldn’t be a state because it’s not a “well-rounded, working class state” like Wyoming, despite its larger population and the fact that there are working class people in D.C.

“I had no idea there were so many syllables in the word white,” Jones said in response to the arguments.

He was referring to how D.C. would be the state with the largest Black population. 2019 Census Bureau numbers state that 47.2% of D.C. residents are Black, far above the current highest: 38.9% in Mississippi.

Moreover, statements that people who live in urban areas are less important than people who live in rural areas has historically been code for racism, and racism is a common motivation for denying democratic representation to people in the U.S.

“My goodness, with all the racist trash my colleagues have brought to this debate, I can see why my colleagues are worried about a place to put it,” Jones quipped, referring to Rep. Hice’s comment about landfills.

“The truth is there is no good faith argument for disenfranchising 700,000 people, most of whom are people of color.”

Republicans called for a point of order. Rep. Andy Harris (R-MD) asked Jones to agree to have his comments stricken from the record. Harris himself had said in an earlier speech that Congress shouldn’t take “Maryland’s land” by making D.C. a state. D.C. is not currently a part of Maryland.

After some discussion, Jones agreed to have his comments withdrawn from the record but continued with his speech, saying Republicans’ “desperate objections are about fear.”

Harris later said in a statement that Jones’s speech was “unbecoming of a Representative and violates the rules of the House” and said that Jones agreed to have his comments stricken because he “realized his words were inappropriate.”

One of my Republican colleagues objected to #DCStatehood because DC doesn't have its own landfill.

With all the racist trash they've been espousing in this debate, it's no wonder they're worried about where to put it. https://t.co/8cYQlx4Bq1

For Jones, this is exactly what he promised to do when he ran for the House. He’s a first-term member of Congress who’s gay, Black, and from a working class family.

He told LGBTQ Nation in a 2019 interview that his background “drives my commitment to a vision of justice and equity and integrity.”

“I think I am uniquely situated to galvanize communities that have historically been shut out of the political process and leverage that to apply pressure on Republicans in Congress who are not speaking to the views of most Americans, who are being allowed to get by because so many people are disillusioned with our politics that they’re not paying attention to what’s going on and they’re not holding their representatives accountable,” he said.

The bill for D.C. statehood ultimately passed in the House with a 216-208 vote along party lines.

The issue remains controversial in the U.S., with polls showing the public evenly divided on whether people in D.C. should get the same representation that almost all Americans do. Democrats say they oppose “taxation without representation,” while Republicans call D.C. statehood a “power grab,” referring to how D.C. would probably elect two Democratic senators partly because of its racially diverse population.

The issue isn’t controversial in D.C., perhaps because being the person whose rights are denied changes one’s perspective on an issue. Residents voted 86% in favor of statehood in a 2016 referendum.

The bill will face an uphill battle in the Senate, where Republicans have more power. President Joe Biden has already stated his support for “long overdue full representation in Congress” for D.C. residents.