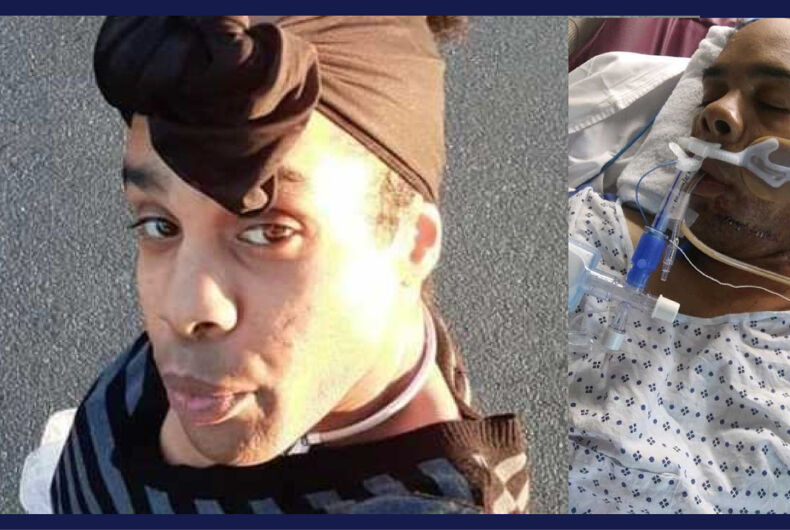 Isaiah L. Brown before (left) and after being shot by a sheriff's deputyPhoto: Screenshot/Composite

Police in Spotsylvania County, Virginia are under intense scrutiny after a sheriff’s deputy gave an out Black man a ride home after his car broke down, just to return minutes later and open fire, shooting him in the face.

32-year-old Isaiah L. Brown is currently fighting for his life in the intensive care unit of the hospital after being fired on and shot a 10 times. His siblings and community are outraged and a Black Lives Matter protest is scheduled for today.

The violent encounter reportedly began when Brown’s car broke down on his way home in the early morning of Wednesday, April 21. A white sheriff’s deputy encountered him at a gas station after 2 a.m. and gave him a ride to his home. His family saw the deputy drop him off.

“He was like, ‘Your brother is fine. He’s not in trouble. His car broke down and I gave him a ride,’” Brown’s brother Tazmon said.

But some time after that, police received a 911 call. Tazmon said that Isaiah just wanted a ride back to his car because he was worried about it being towed, but police state that this was a domestic disturbance report.

“At approximately 3:18 a.m., Wednesday April 21, 2021, a Spotsylvania Deputy was investigating a domestic disturbance in the 12200 block of Catharpin Rd in the western part of the county,” Major Troy Skebo wrote in the department’s statement.

A source told NBC Washington that Brown was in a dispute with a family member, and “was complaining about his brother.” So the same officer that dropped him off returned, less than an hour later.

“While conducting the investigation, a deputy encountered an adult male. During the course of that encounter, the deputy discharged his service weapon and the male suspect was struck,” the department’s statement said.

“The suspect is currently being treated at a local hospital.”

The Spotsylvania County Sheriff’s Office is referring to Brown as a “suspect” although he was the one who called 911. The department also declined to commit to releasing body camera footage from the shooting.

“At the request of Sheriff Harris, the Virginia State Police Bureau of Criminal Investigations Police Shooting Investigation Team will be investigating the incident,” that statement concluded. Their findings will be sent to the Fredericksburg Commonwealth’s Attorney for review as a special prosecutor.

The department declined to confirm or deny further details publicly.

In communication with the Washington Post, Virginia State Police Sgt. Brent Coffey described that when the deputy showed up, Brown came down the driveway.

“The sheriff’s deputy attempted to verbally engage Brown and it was during this encounter that the deputy discharged his service weapon. Brown was shot and the deputy immediately rendered medical aid,” Sgt. Coffey said.

Tazmon and Brown’s sister Yolanda are confused as to why the deputy opened fire.

Both police and the family said that Brown was not armed at the time.

The family has hired a lawyer and contacted the NAACP. They have not yet issued any further statements.

The Black Lives Matter chapter for the Fredericksburg area said they will hold a march in protest Friday afternoon. The group and supporters will meet at 5:30 p.m. outside the Spotsylvania Courthouse.

Isaiah Brown is in intensive care after a sheriff's deputy shot him 10 times outside his home in Virginia yesterday.

Mr. Brown was unarmed, carrying just his cell phone. Bystanders say the deputy appeared to open fire without warning and for no reason.https://t.co/tDkvY4V4mS

Isaiah Brown was shot 10 times by a Spotsylvania County Sheriff's deputy after he called for help. Our community deserves to know what happened to him.

Transparency is a must. @SpotsySheriff, release any footage available of the incident & the identity of the deputy NOW. https://t.co/xdhUncy0Uw

32-year-old Isaiah Brown is in intensive care after allegedly getting shot ten times by an officer who gave him a ride home after his car broke down. Brown called 911 at home, and the same officer went back where they reportedly shot an unarmed Brown. #BlackNewsTonight pic.twitter.com/5CEVQjNNid