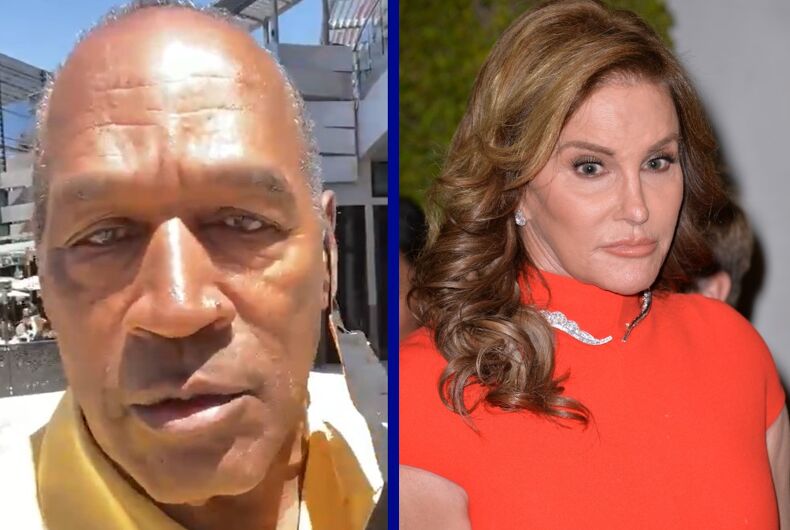 O.J. Simpson – the former NFL player who was accused of beheading his ex-wife Nicole Brown Simpson after years of domestic violence – has decided he’s very concerned with women’s rights and unleashed a diatribe about transgender women in sports where he deadnamed Olympic gold medalist Caitlyn Jenner.

“I guess I’m against it. I’m against transgender males competing against women,” he said in a video with the message “X is X and Y is Y.”

Simpson was tried in the 1990s on charges of murder for the deaths of his ex-wife and her friend Ron Goldman. During the trial, the jury heard a four-minute 911 call from Nicole Brown Simpson where she was screaming and Simpson could be heard in the background threatening her. An officer who responded to the call said that he found her severely beaten and hiding in bushes, screaming, “He’s going to kill me, he’s going to kill me.”

Simpson was acquitted at the criminal trial but found financially liable in a civil trial. In 2006 he wrote a book entitled If I Did It, where he discussed how he, uh… hypothetically would have murdered Nicole Brown Simpson and Goldman.

But now he’s very, very concerned with fairness in women’s sports and Jenner specifically for playing golf with women.

“Somehow it just bothered my senses that [Caitlyn Jenner] would be playing on the ladies tees,” Simpson said in the video posted to Twitter, referring to a time he saw her playing golf at a country club.

He used Jenner’s deadname several times. She never competed professionally in women’s sports because she transitioned years after she retired from athletics.

“I just thought it was sort of unfair,” he said.

“But then I say to myself, well what do I think about transgender females who become males… should they still be able to compete against females?” he said, laughing. “This whole thing is making my head hurt. I don’t want to think about it!”

It’s odd that he wouldn’t want to think more about the science behind gender, considering his role in educating Americans about science in the 90s. His trial was one of the first highly-covered criminal trials where DNA evidence was used, and many Americans at the time learned about how DNA showed that his blood was at the crime scene and the victims’ blood was in his car.

In competition, X is X and Y is Y pic.twitter.com/K4QSpZhDZU

Simpson said that he was talking about “especially high school sports” in his video. Republican state lawmakers all over the country are considering bills to ban transgender girls from participating in school sports, even in states where no one can even name a trans girl playing school sports.

The video highlights how much of the concern for “fairness in women’s sports” is only applied to questions of allowing transgender people to participate and comes from people who don’t have much of a history of supporting women’s sports or women’s equality in general.

In fact, as state Republican lawmakers have introduced a slew of anti-trans bills this year, they’ve also introduced over 500 bills to limit women’s reproductive rights.

Rep. Greg Steube (R-FL) introduced a bill in Congress to force states to ban trans girls from school sports, which he named the “Protection of Women and Girls in Sports Act of 2021.” He is also a co-sponsor of H.R. 2223, which would make it more difficult for minors to get abortions, meaning middle school and high school girls could be forced to go through pregnancies if he gets his way.