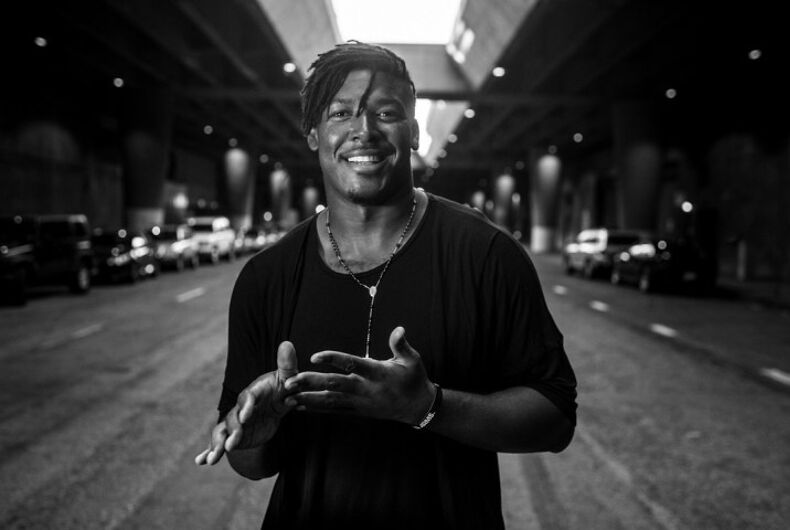 Out NFL veteran and writer Ryan K. Russell has spoken out against the wave of anti-trans legislation that seeks to prevent trans youth from participating in sports. Russell came out as bisexual in 2019 after playing in the NFL for three seasons.

Russell wrote an editorial declaring that “trans kids deserve the same opportunity that made my NFL career possible.”

Russell penned an op-ed for the Guardian outlining how sports changed his life and his hope that trans and queer youth will be allowed that opportunity as well.

“Ninety-nine out of a hundred times the reason athletes of similar ability don’t go the same distance or don’t make the leap from amateur to professional is circumstance and opportunity, two things that in our day and age – unlike mastery of a sport – you are born into,” his article began.

“After the past few weeks, most trans children including those who have immense potential to be great athletes or, at the very least, find love and joy in sports, can’t even pick up a ball without legislation telling them they don’t belong. Being born Black, queer, trans or of any marginalized community puts you behind the starting line of any race, even when you might need that love and community more than we imagine,” Russell wrote.

He continued on, describing how sports gave him opportunities that he was generally limited from, and how it changed his life for the better: “I was given an opportunity in football. I found love there. All kids need this.”

“I needed it as a Black teenager in the south from a low-income, single-parent home. My NFL peers all needed someone to give them a shot or they never would have made it. And trans kids need this, too. They need to be treated like kids, like they are worthy of the opportunity to play, to find love and community on the field. Everyone is worthy of this.”

He shared, “the locker room is a place that, regardless of what going on in your day-to-day life, you should feel a part of something great, powerful, and welcoming. LGBTQ+ people and trans people need that more than anyone.

“To exclude trans athletes is to use sport in direct opposition of where its true power lies.”

He explained that the “more than 200 anti-trans bills currently under consideration in state legislatures” are not about protecting the integrity of sports or women, but “attacking, harming and eradicating the most vulnerable of us all.” He further compared it to other ways marginalized people are excluded or limited in the sports world.

He called on other athletes to stand up against the concerted effort to ban trans youth from sports. “When it comes to change, sport is one of the strongest conduits to help show society what it is capable of when we come together, but it has to be used for the better of all of us,” he implored.

“Jackie Robinson understood that, Robbie Rogers knew that, Megan Rapinoe knows that, Chris Mosier knows that, and I hope you know it as well.”

“This is one of the single best op-eds about trans inclusion in sports I’ve ever seen from a cis ally,” GLAAD’s rapid response manager Mary Emily O’Hara tweeted about Russell’s article.

Russell, currently a free agent in the NFL, still seeks to be the first active openly LGBTQ player to play in a game in one of the four major professional sports leagues. He was drafted by and played with the Dallas Cowboys in the 2015-16 season, and then the Tampa Bay Buccaneers from 2016 to 2018 before a shoulder injury set him back.

He came out in August 2019, writing his story and publishing it first-hand for ESPN.

“I kind of knew what sacrificing would feel like, and what that life was like being in the closet, and I didn’t want to do that again, so I felt that, ‘I need to come out – and I’m still going to pursue my football career, because I should, and teams want me, and I’m damn good, and I deserve to be happy in my personal life,’” Russell told LGBTQ Nation in an interview this past November.

“I know there’s a big media story, [or] narrative, right now that LGBTQ+ players won’t be accepted, and that they’re a distraction – all these things, without any basis, without any evidence backing it up,” he added at the time.

“Don’t let anyone use the games that we love for hate. Don’t let them distract from what’s really going on. This is an attack and we need to defend ourselves and our trans youth. We need to defend equality.” Well said @RKRelentless 🏳️‍⚧️🏳️‍🌈✊🏻✊🏽✊🏾✊🏿

"Don’t let anyone use the games that we love for hate. Don’t let them distract from what’s really going on. This is an attack and we need to defend ourselves and our trans youth." @RKRelentlesshttps://t.co/yCI1kPtEDa

I'll always stand up for what I believe in and to protect the credibility of sports. These bills aren't about protection but are a direct attack.

This is one of the single best op-eds about trans inclusion in sports I’ve ever seen from a cis ally 🙌🏼 https://t.co/ZzO3QMjkE3