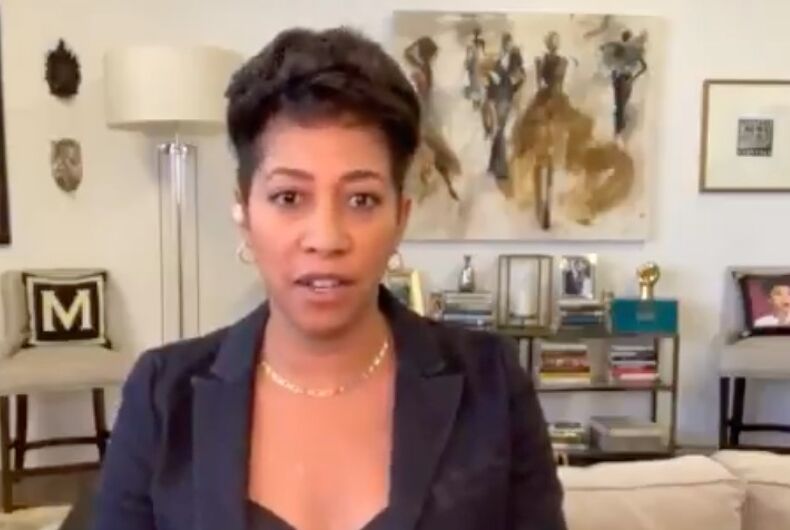 Aisha Mills, the powerhouse Black lesbian who previously led the LGBTQ Victory Fund, is not to be trifled with. Former Fox News host Eric Bolling found that out the hard way.

During a BBC debate, Mills’ sharp retort to Bolling’s handwringing left him so upset he stormed out when Mills refused to apologize to him for being offended by what he had said.

Related: Caitlyn Jenner is talking about running for governor of California as a Republican

During a discussion about Major League Baseball’s (MLB) decision to yank the All-Star Game from Atlanta in response to the state’s draconian new voter suppression laws that are aimed at disenfranchising the votes of people of color, Bolling was very concerned about Black folk.

Not that their civil rights were being violated, but that moving the game to Denver will hurt minority-owned businesses in Atlanta who would have benefited from the game.

“I think it’s really rich for any Republican, especially a white man, to run around and claim they care about the economic condition of Black communities and Black businesses when that’s all a lie,” Mills shot back.

A very perturbed Bolling took immediate offense, huffing and puffing his way through the next couple of minutes before returning on camera to demand that Mills apologize to him as a condition of continuing the interview.

“That’s disgusting,” Bolling said. “I’m done. Put me off. That’s disgusting. I am nowhere near anything you are painting me to be, and the problem with American politics is exactly that. Because I’m white, you think I’m racist? That’s BS. I’m done.”

“I’m not going to apologize for being offended,” Mills replied.

Former Fox News host Eric Bolling walks out of a BBC debate about Georgia's voting law after a guest says white Republicans were pretending to care about Black people.pic.twitter.com/gEQswBVFKC

Lil Nas X’s “Satan shoes” are being recalled. Do they really think people will send them back?