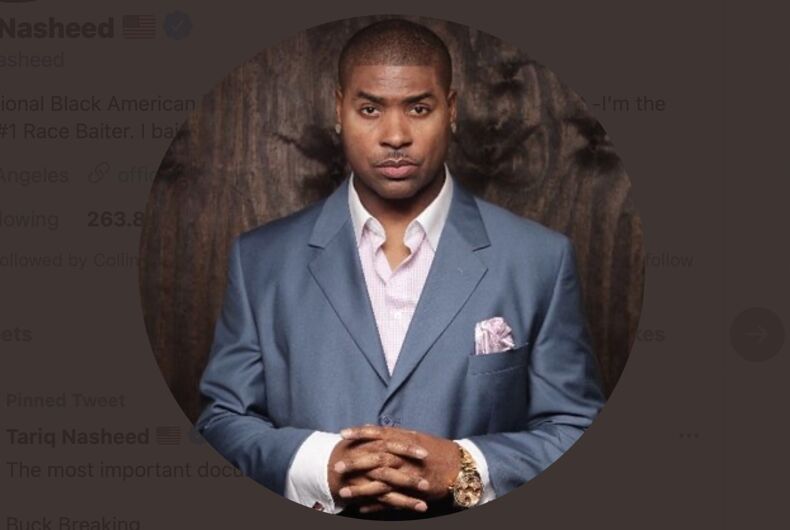 Twitter activist Tariq Nasheed describes himself as the “world’s #1 Race Baiter” but his latest claims of racism has Twitter lashing back after he posted video of a mentally ill gay man having a breakdown at work.

The Holiday Inn Express employee is obviously in distress as the customer, who had reportedly hurled anti-gay slurs at the young man, films and harasses him. In a post to Reddit, the man said he is now suicidal after the humiliation both at work and online.

“I basically went viral because of my schizo-affective disorder documented by a rude customer at an establishment which I was employed,” he wrote in a post in the “helpme” subreddit. He also said he had been drinking nonstop since the incident and hadn’t slept.

“Why can’t people have basic human kindness and compassion for one someone obviously not sound?” he added.

The customer was reportedly upset about a mix-up with the hotel’s reservation system. While the employee is meek and obviously distressed, the customer continues to harangue him until the young employee starts hitting himself with the computer monitor. He eventually breaks down in tears and leaves the desk.

The customer moves to a window to continue filming the young man as he sobs, mocking him and continuing to complain about his issue.

A white Holiday Inn Express worker has a nervous breakdown after he got scolded by a Black customer because of a mistake in the reservation system. pic.twitter.com/KUEyqUSgsM

After finding the video posted on the subreddit “Publicfreakout,” the man responded to say it was him.

“That’s me,” he wrote. “Literally on the edge of my rope and contemplating a lot of things as I view this. Doesnt’ anyone have a bad day anymore?”

“What the guy recording DIDN’T record was him calling me a FAGGOT for ‘taking his money’ which is my job. as well as threatening my job security. While that depiction is correct, because I am a giant homosexual, that was that. I was done.”

Nasheed continued to defend his decision to post the video and his implication that the young man is a racist after facing blowback from both progressives and conservatives.

“The Holiday Inn employee video I posted that went viral, has a lot of white supremacists using the man’s disorder as a way to project their anti-Black racism,” he tweeted after his grotesque post drew the internet’s ire.

He also claimed the employee was drunk on the job without any proof.

Went home, got drunk at 6 AM

Drunk driving was a bad move
BUT DUDE HOW DO YOU LOOK UP HIS RESPONSE TO THIS AND LITERALLY IGNORE THE FACTS pic.twitter.com/xQDa1L7uHp

“I’m pretty sure most of the people calling you out for this aren’t white supremacists,” one user replied.

“Yes they are,” Nasheed responded.

“What was your purpose in posting this? What are you trying to gain?” one user asked.

“Since when has standing up for a low paid key worker who is being bullied to the extent that they self harm, suffer a breakdown on video for people’s amusement an act of racism?” a different user responded. “I know twitter can seem strange at times; but that is an entire new level of narcissistic logic.”

“I don’t want to give up. I don’t. I have to live for my boyfriend, who I really want to be my husband someday,” the employee wrote on Reddit. “I need to live for my dogs, Ellie and Joel, because I love them with all my heart and I couldn’t bear parting with them early and have them wonder why I didn’t come home.”

You have zero idea what issue that man has. Cut the “I’m white and I say so” bs

you are too stupid to understand what harassment is and how the legal system works.

Your "Im white and I say so" gibberish aint working out for you at all, is it?

Maddow finds shocking fact about Capitol riot: “I don’t understand how this isn’t the headline!”