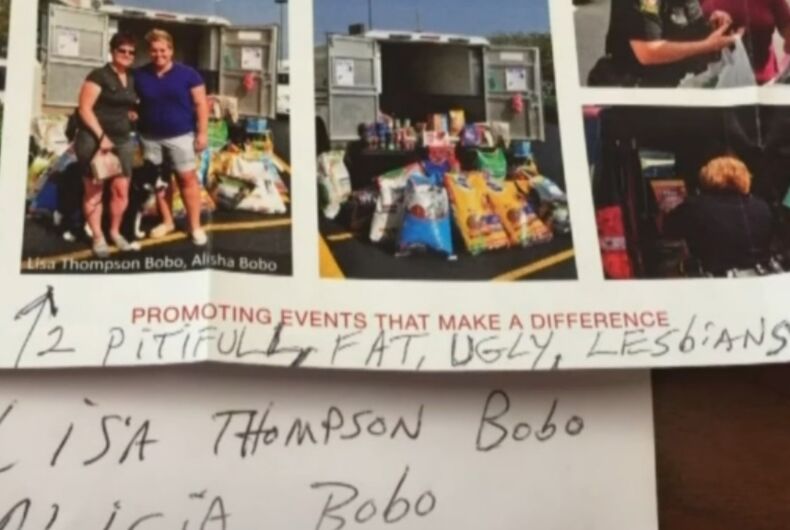 A former U.S. Representative from Kentucky was caught practicing law even though his law license was suspended for lying about sending a hateful letter to another attorney.

Related: After a trans woman’s cat was cut in half in a gruesome hate crime her neighbors painted her house

He had been accused of sending a letter in 2017 to attorney Alisha Bobo and her wife where he drew an arrow at a picture of them and called them “PITIFULL [sic], FAT, UGLY, LESBIANS.”

Bobo said that the letter was “very disappointing that someone, a grown person such as Mr. Hubbard — someone I previously respected — would go there.”

She didn’t make it public until 2018, though, when she found herself working on a visitation case where Hubbard was opposing counsel. She told the court and asked that he be removed from the case.

Hubbard said, under oath, that he did not send the letter.

By February 2019, he admitted to sending the letter and apologized to the Bobos. He also admitted to filing a Judicial Conduct Commission complaint against the judge in that case just because he was mad that the letter was brought up.

The Kentucky Supreme Court found him guilty of five counts of misconduct connected to the letter and lying about sending it and suspended his law license for 60 days. They also made him send apologies to just about everyone involved and pay over $1000 in court fees.

In October, he was caught representing a client in a drug case, even though his license had not been reinstated. Even though 60 days had passed, he hadn’t taken the steps necessary to get a valid license again.

Hubbard told WPSD 6 that he thought his license was valid at that point and that his lawyer hadn’t told him that he needed to take certain steps to get his license reinstated because his lawyer “forgot” about him.

Hubbard graduated from law school in 1962 and was a U.S. Representative from 1975  to 1993. So when he was asked how a lawyer doesn’t know what the law is here, he said: “I never had been suspended.”

Which is technically true. Hubbard pled guilty to federal charges related to a banking scandal in 1994 and was sent to prison from 1995 to 1997, but his license was revoked. Being disbarred isn’t the same as getting a license suspended, so he claims he didn’t know what he was supposed to do.

He is currently running for the Kentucky House of Representatives as a Republican, even though he was a Democrat when he was in the U.S. House.

Students thought their Mormon university was OK with gay people for a second. Oops.