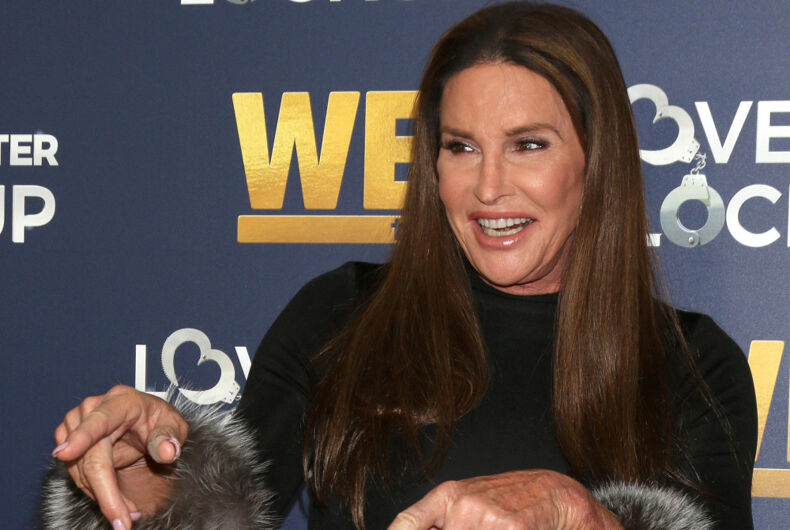 Evangelical talk show host and activist Charlie Kirk went on a transphobic rant about Caitlyn Jenner’s gubernatorial run as a Republican, and the two other reporters on Fox News with him didn’t contradict him.

Jenner has also been getting slammed by progressives for her political stances and even her stepdaughter Kim Kardashian West is reportedly “disappointed” in Jenner’s politics, raising the question of who exactly supports Jenner.

Kirk was talking with Fox News host Martha MacCallum last night when she asked him about Jenner’s campaign to replace California Gov. Gavin Newsom in a recall election. Jenner has hired top GOP strategists to help with her campaign and is banking on her celebrity to help her win.

But Kirk wasn’t impressed. All that’s important to him is that Jenner is trans and therefore she’s unqualified.

“I’m not a huge fan of the Republican party getting behind Caitlyn Jenner,” he said. “Biological standards matter.”

The phrasing is generally used by opponents of transgender equality to argue that gendered spaces – like sports teams, homeless shelters, or social clubs – should be defined by sex assigned at birth, not gender.

In the context of a gubernatorial campaign, it’s unclear how sex assigned at birth would be important, but Kirk made it clear that he just doesn’t want Jenner to win because she’s transgender.

“Let me say, I’ve met Jenner. Very nice person, and I think that Jenner really believes in conservative values to an extent,” he said, but said that it should be part of Republicans’ “deeply held beliefs” that transgender people should not exist.

Kirk, who is the founder of the conservative thinktank Turning Point USA, took care not to use any pronouns to refer to Jenner and just used her name over and over.

Fox News contributor Leslie Marshall then said that “some people think” Jenner’s campaign is “a money-making thing or an ego-boosting thing.”

Jenner hasn’t been getting much support from the left either. Rep. Ted Lieu (D-CA) mocked her over the weekend after Jenner accused Gov. Newsom of appointing district attorneys who were “releasing dangerous criminals back on to our streets.”

“District Attorneys are elected by voters, not appointed by Gov @GavinNewsom,” Lieu responded, asking if Jenner knows “how a bill becomes a law.”

Dear @Caitlyn_Jenner: District Attorneys are elected by voters, not appointed by Gov @GavinNewsom.

Also, do you know how a bill becomes a law? Here is a cool Schoolhouse Rock video for you to educate yourself. https://t.co/E0hiH96QDw

Her own stepdaughter Kim Kardashian West, who is passionate about prison reform, is reportedly “disappointed” and “disturbed” by Jenner’s tweet about the district attorneys.

Even LGBTQ and transgender advocates aren’t showing much support for her campaign.

The LGBTQ organization Equality California said that she shouldn’t be trusted.

“Make no mistake: we can’t wait to elect a #trans governor of California,” the group tweeted. “But @Caitlyn_Jenner spent years telling the #LGBTQ+ community to trust Donald Trump. We saw how that turned out. Now she wants us to trust her? Hard pass.”

After Trump banned transgender troops from serving in the military, attacked transgender students and even tried to allow homeless shelters to turn away trans women, @Caitlyn_Jenner STILL hired his former inner circle to run her campaign.

Trans advocate and former HRC communications staffer Charlotte Clymer “a deeply unqualified hack who doesn’t care about anyone but herself.”

Appropriate response: Caitlyn Jenner is a deeply unqualified hack who doesn't care about anyone but herself. Her views are terrible. She is a horrible candidate.

Inappropriate response: [Misgendering Caitlyn Jenner because you think transphobia is okay here. It's not.]

“It matters to us what policies candidates support — and what their track record might be — on a full range of issues, not just trans rights and inclusion,” Sasha Buchert, who co-directs the Transgender Rights Project at Lambda Legal, told the LA Times.

“That is the lens one should always use in evaluating any candidate, including Caitlyn Jenner.”

If Jenner wins the election, she would be the first transgender governor in the U.S.

Maddow finds shocking fact about Capitol riot: “I don’t understand how this isn’t the headline!”