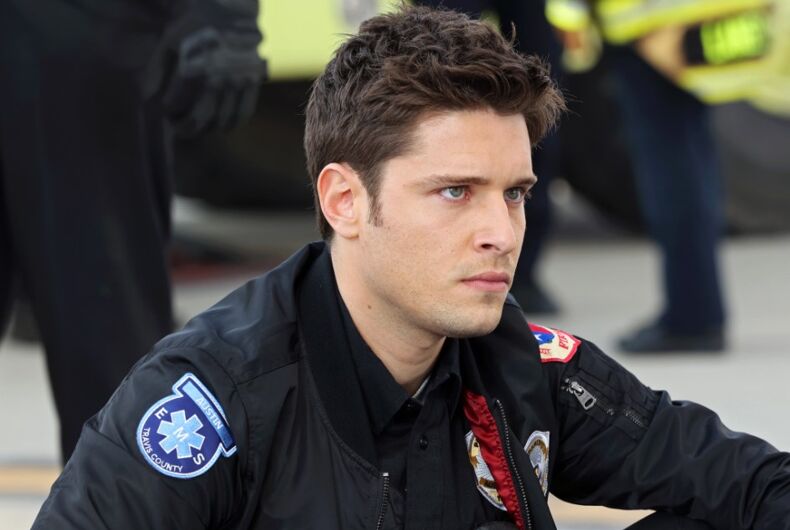 Actor Ronen Rubinstein from Fox’s 9-1-1: Lone Star just came out as bisexual, saying that playing a gay character on the Ryan Murphy show – and his girlfriend – helped him come out in real life.

On 9-1-1: Lone Star, Rubinstein plays TK Strand, a paramedic whose father is firefighter Rob Lowe. Strand is gay and has a relationship with police officer Carlos Reyes, played by out actor Rafael L. Silva.

“Carlos and I have a huge make-out scene where we, like, burst through the door, and we’re ripping our clothes off,” he said, explaining that he warned his family about the scene before it aired, saying, “Listen, I understand if you guys don’t want to watch it, I understand you probably might say some really ignorant, close-minded stuff or you just might not want to watch it and I get that too.”

Fans dubbed the couple “Tarlos” and Rubinstein said that they were so supportive that he felt better about coming out.

“The fans, especially the Tarlos fans, it’s one of the biggest reasons that I finally felt safe and comfortable to talk about it and to finally embrace it and be happy about it,” he said.

The fans helped him overcome the homophobia he experienced during his upbringing, he said. He was born in Israel to Russian-Jewish immigrants from what is today Kazakhstan. At age five, the family moved to Staten Island.

“The biggest thing for me is where I come from, it’s like people like me and people who have identified as bisexual or gay or as any part of the community, you’re just not welcomed. It’s as brutally honest as that,” he said. “It’s either you faced insane amounts of profanity, like the F-word was thrown around all the time or you would get your ass kicked if you were gay.”

He said that he was “definitely more aware” of his sexuality when he got to high school, but that he felt that he “couldn’t talk to anybody about that.”

Rubinstein said that his girlfriend Jessica Parker Kennedy also helped him be more comfortable with his sexuality.

“She’s actually one of the first people that sort of respectfully called me out on it,” Rubinstein said. “She’s like, ‘Is there something we need to talk about?’ And I said, ‘Maybe.’”

Variety said that Rubinstein approached them about coming out in an interview because he wanted to make things easier for queer youth.

“I want people to know that they’re not alone and it’s definitely okay,” he said. “Trust me, I know that it is not easy. My path has not been easy at all, but it’s just one more thing that I can share with people to help them and let them know that I’m here for them.”