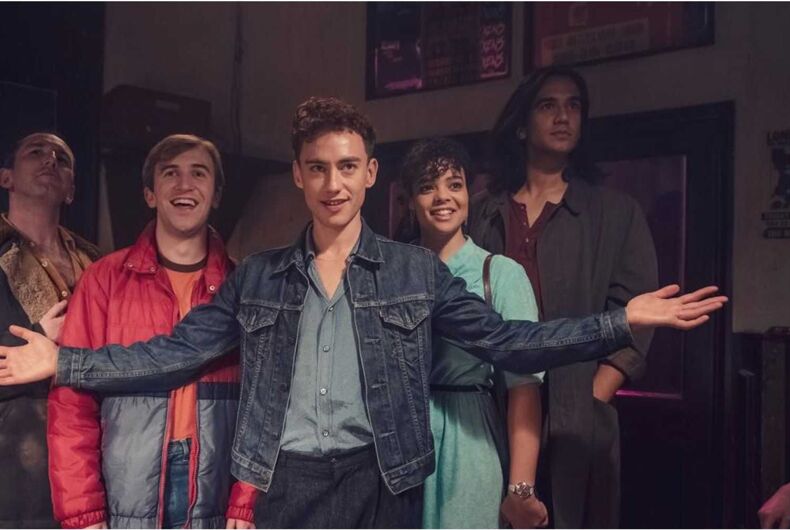 The cast of "It's a Sin"Photo: Publicity photo

The strongest criticism of It’s a Sin has come from US activists, maybe because the triggers of memory are less potent. Among them are Peter Staley and Mark S King, both activists and writers I respect, who felt the last episode voiced blame rather than portrayed it.

Well, I just watched the last episode. I knew I could only take one at a time. Three-quarters of the time in tears. One quarter pounding my fist in anger.

But not at the show. For me, it was note-perfect. Just brilliant. Not a documentary. Not a pinnacle of art, like Angels in America. Not a portrait of what it takes to be an activist, what you gain and what you lose, like 120BPM or, in its own softer way, Pride.

It was a TV drama. It was compressed, telegrammed, and necessarily, at times, a little clumsy. A touch soapy. People sometimes stood for things and made speeches they would never have had the articulacy to say for real.

Even when I thought it was going dramatically off-balance, it redeemed itself. Like when Roscoe’s dad turns up again. That’s a bit artificial, I thought. But what does he do with it? He uses it to bring in, in a few sentences, the suffering of Africa, which I was entirely ignorant of at the time. (One of several reservations I do have about the show was that the decision to exclude Roscoe or Ash from catching HIV meant that the Black characters fade out in the last two episodes).

But we lived our defiance of shame. Bliss was it in that dawn to be alive, not just in the early 80s, but even as death gathered all around.

In particular, the critics have said these two things:

The Shame, see? Gets you coming and going.

And Richie himself answers that eloquently but saying how he tried to use condoms, but often failed. As did I.

As for blame, that was all around too. Because Russell T Davies had to cut his original series from 8 episodes to 5, Jill lacks a backstory, which has the effect of making her speech to Valerie, Richie’s mom, into an editorial. I don’t think it’s meant to be. These are two angry women. One has just learned she’s been stopped from being with her queer buddy as he died by the other, who has just lost her son and feels blamed for it.

The easy thing to do would be to have reconciliation and the most painful aspect of this scene is that they almost do. But Davies, while a warm writer, is not a sentimental one. I don’t think he allocates blame. He just shows it. It was everywhere.

In looking back at his own younger self, Mark described himself as “vapid”. I’m sad he feels that way. That’s not the person he is now, and I find it hard to believe he ever was. Recovery and the wisdom of experience do not fundamentally change who we are. They just change our lives.

I put this pic up from 1982 because that’s still me, I’m just me with a bit more wisdom, experience and wrinkles. I was smart, arrogant, angry, flakey. Oh, yes, and hypersexual. And, before you ask, I don’t know if I infected anyone but the possibility is there, even after I knew.

Lastly, one of the most remarkable things – and the proof I’m not alone in being concussed by the historical and emotional accuracy of this series – is the extraordinary social effect it’s had. Possibly because the Thatcher government handed over control of AIDS to her health secretary Norman Fowler, we in the UK were relatively spared a period of fighting for our lives against an uncaring and withholding political and medical establishment.

What that meant is that we were just left with … fighting for our lives.

As a result, I think PLHA survivors and their friends have been sitting on an awful lot of emotion and trauma that they felt unentitled to have, or without words to express. This series seems to have unleashed it. And what it has released has indeed largely been fond memory, not anger. A sense of at last being able to remember and speak about that foolish youth of ours in all its edge-of-death glory as well as its pain. It’s also helped me forgive and value more the young Gus in the photo.

My God, the times we had. My God, what we endured.

Gus Cairns is coordinator of the advocacy partnership PrEP in Europe and used to be the editor-in-chief of the UK’s “Positive Nation.”

Chad Banks is a gay Democrat serving in Wyoming. Here’s what he says it’s like.

America is at an inflection point. Malcolm Kenyatta believes we can face it.