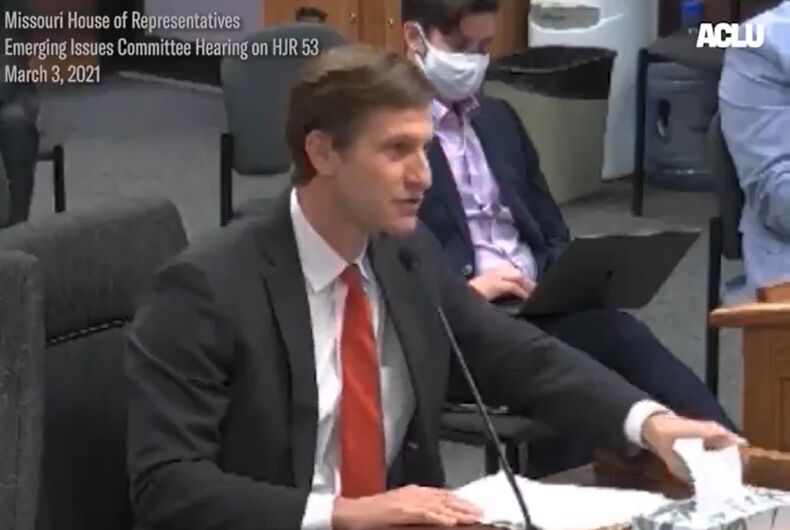 The father of a transgender girl has the internet shaken with his heartfelt plea for her humanity as his state legislature considers a bill to ban trans girls from playing sports in school.

“Let them have their childhoods,” Brandon Boulware pled the Missouri House, tearing up. “Let them be who they are.”

The chamber is considering House Joint Resolution 53, which would ban transgender girls and women from school sports. And Boulware said that the state has the same lack of understanding he had when he came to know that his daughter is trans.

“For years, I didn’t get it,” he said. “For years, I would not let my daughter wear girl clothes. I did not let her play with girl toys. I forced my daughter to wear boy clothes, get short haircuts and play on boy sports teams.”

He said that he thought he did it to protect her from being teased but admits he wanted to “avoid those inevitable questions as to why my child did not look and act like a boy.”

He came to realize that the girl was “equating being good with being someone else. I was teaching her to deny who she is.”

But she had “a total transformation” when Boulware and his wife stopped forcing her to present as male. “I now have a confident, a smiling, a happy daughter.”

And part of that is that she plays girls’ volleyball and has friends. These social connections, he explained, are key to her feeling accepted and happy.

The video has been viewed over 2.6 million times on the ACLU’s Twitter alone.

MUST WATCH: Brandon Boulware, the father of a transgender daughter, testifies during a hearing asking Missouri lawmakers to stop discriminating against trans youth. pic.twitter.com/bTuSoyE1nW

Elliot Page knew he was a boy since he was 9. It took the pandemic for him to transition.