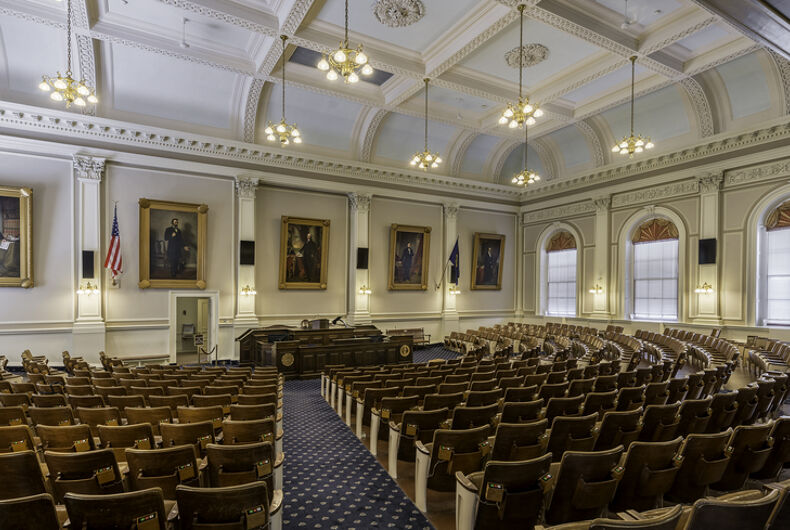 Rep's Hall, or House of Representatives chamber of the New Hampshire State House on July 28, 2015 in Concord, New HampshirePhoto: Shutterstock

A committee meeting in the New Hampshire House of Representatives devolved into chaos after a GOP lawmaker referred to LGBTQ people as “deviant,” earning an immediate rebuke from a fellow Republican.

The committee was debating a proposed law that would eliminate the gay or trans “panic” defense that allows defendants in murder or assault cases to claim they were so shocked or outraged when they “discovered” the victim is gay or trans, they reacted violently.

“This situation is very analogous to a lynching defense that would center around a person being triggered by seeing Black people,” State Rep. David Meuse (D) said during the hearing. “I think passing this bill is part of the process that we need to make to essentially get to a point where all of our people have equal protection under the law.”

“We refer to people as gay or ‘LBGs’ or so on and so forth, and we want to carve them out and say they got special privileges,” State Rep. Dick Marston (R) said. “Our Constitution of New Hampshire as I understand it covers everybody to begin with. And we only a number of years ago amended our Constitution about discrimination towards somebody. We don’t want to do that. But I’m just saying, we don’t want to have special privileges for special people.”

“We’re all the same breed. We’re all the same people. If you kill somebody you should be charged for murder, and you should be tried on it, and there’s no way in heck that you’re going to be able to say ‘Well because he or she was some deviant sexuality that I’m not–,’”  he added, before being interrupted by the Republican chairman of the House Criminal Justice and Public Safety Committee.

“Rep. Marston, no member is able to speak of someone’s ‘deviant sexuality’ like that,” State Rep. Daryl Abbas, told Marston after gaveling him into silence.

“What is LGBT?” Marston shot back, prompting Abbas to adjourn the hearing as it devolved even further.

The committee was adjourned shortly before they were to vote on the bill. It isn’t known when they will take up the proposed legislation again.

Thirteen states and D.C. have banned the defense already.

Illinois barred the defense in 2004 after its use in the Gwen Araujo murder trial. In that case, three young men in Newark, California claimed that their several-hour-long torture and murder of a young trans woman was the result of the shock of discovering that Araujo was transgender.

Journalist Alex Berg has spent the past decade telling queer stories. Here’s why.