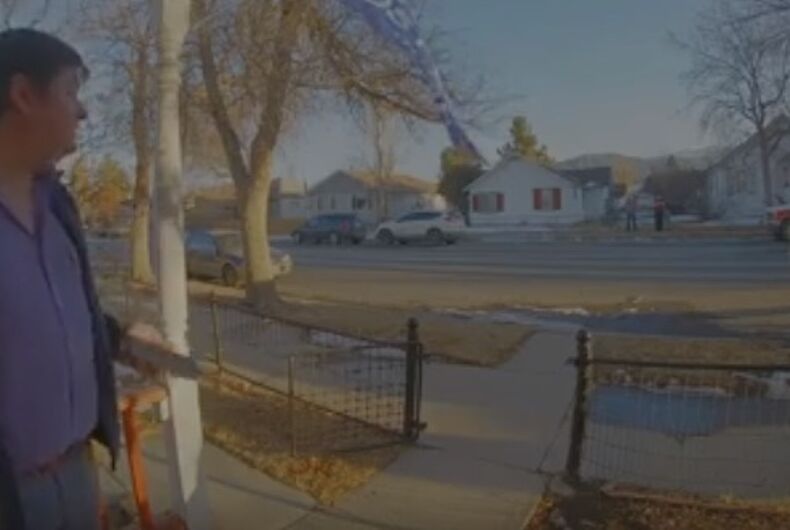 Tim Mielke is a gentleman. His neighbor, Michael Challans, is decidedly not.

That’s why Mielke is being hailed as a class act while Challans will be paying a $100 fine for using “loud, profane, and offensive language” after he was caught on video screaming anti-gay slurs across the fence in their Helena, Montana neighborhood.

Challans, who flies a “Fuck Your Feelings” Trump flag, was upset that Mielke also flies a flag: a “Trump lost” banner.

“When you gonna take this faggot-ass flag down?” Challans yells as Mielke walks down the sidewalk on his way home from work.

“When you take yours down,” Mielke replies.

The back-and-forth between the two continues as Challans tells him he moved into the wrong neighborhood and continues to spew anti-gay slurs.

“Well, you’re entitled to your opinion,” Mielke tells him.

“Of course someone like you would say that,” he replies. “That’s what all you fucking fags say. You fucking pussy.”

“Enjoy your evening,” Mielke responds with a dismissive look and a flick of his hand as he walked inside.

“It’s retarded,” Challans told local news. “I don’t see how I could get a ticket.”

“He is going to fly that flag and he expects no one will say anything to him?” Challans said. “I was in my own yard, and behind my fence. How could anyone get in any trouble for that?”

“I didn’t harm him or anything,” he said. “I have no problems with gay people.”

Even if you don't personally believe in the actions and vulgarity of my neighbors, if you voted for Trump, you enabled this. For reference I just arrived home from work and was walking to my front door, and my neighbors still have Trump 2020 "fuck your feeling" flags up.

Elliot Page knew he was a boy since he was 9. It took the pandemic for him to transition.