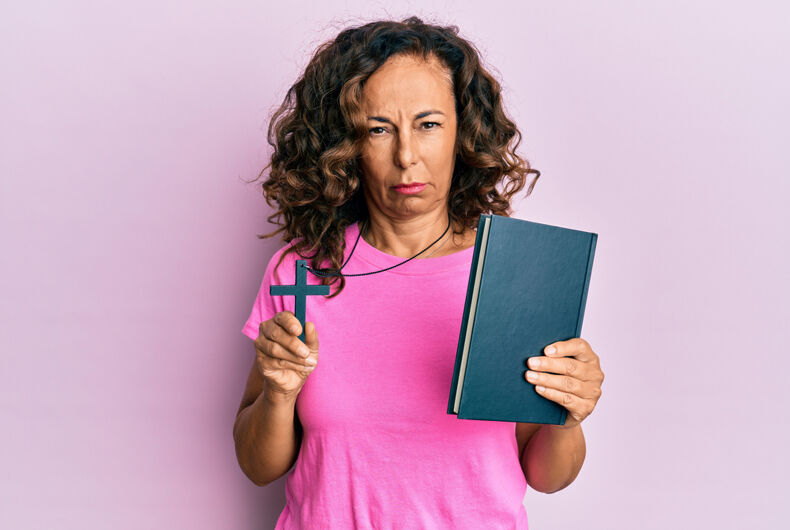 When a woman came over to two teens at a fast food restaurant, she had one thing on their mind. She was there to save the teenage sinners she thought were in a gay relationship.

Now a video has gone viral of the woman’s awkward proselytizing when the two let her know they are cousins and tell her to mind her own business because there’s nothing wrong with gay people.

The video opens with the woman approaching and asking the two, Kaiden and Jordan, if they go to church. Text on the video points out that the woman had been staring at them for a while before walking over to their table.

“I don’t know you… at all,” one of the teens tells the woman.

“I just see you guys and you guys aren’t, like, girlfriends, are you?” she said, misgendering Kaiden.

“But if it was, it’s genuinely none of your business.”

The woman tells the teens that she isn’t trying to force her beliefs on them, she just wanted “to let you guys know because they don’t teach you young kids about God anymore and it’s just not the right way to live!”

“I don’t know, you kinda came over here out of nowhere and we have no clue who you are,” they shoot back.

“Yeah,” the woman responds before awkwardly leaving. “God told me to come over here.”

here’s the vid with the captions for those who wanted it. #fypシ #foryou @defnotjordanjames

Christians have been trying to convert me for years. I don’t need to be saved.

Alabama schools teach that homosexuality is wrong. That could change soon.