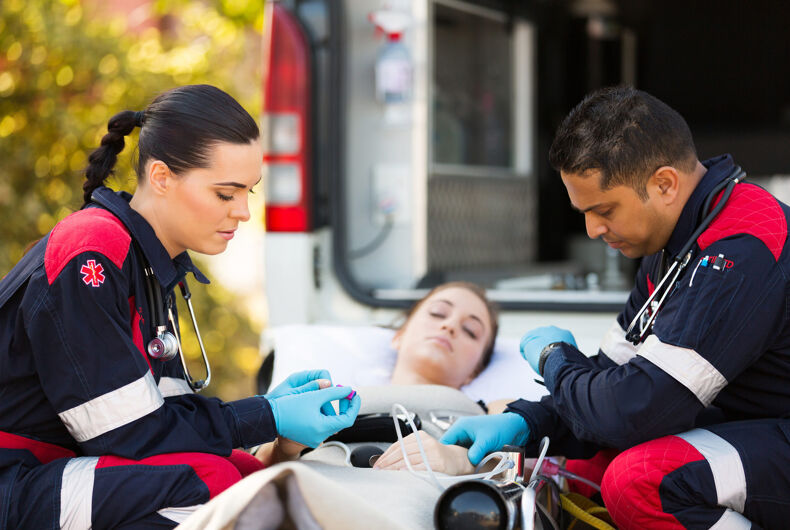 A proposed legislation that is being called one of the “most extreme and deadly anti-LGBTQ healthcare bill” seen in years is heading to the governor’s desk in Arkansas.

S.B. 289, dubbed as the “Medical Ethics and Diversity Act,” seeks to give medical workers a right to refuse providing healthcare to someone because of the worker’s “religious, moral or ethical” beliefs. That could open the door for LGBTQ people to face denial from life-saving service from doctors, nurses, or EMTs.

Related: Arkansas may require a court order for adopted girls to play school sports because of anti-trans law

The bill was previously rejected by the Arkansas House Public Health, Welfare and Labor Committee over criticism that it was too broad before it passed.

Last month, it made it out of the committee, then was returned with amendments, passed the committee again, passed the House, and has now finally passed the Senate along mostly partisan lines. Two House Republicans voted against its passing out of 74 that voted, and one Senate Republican.

One of the co-sponsors of the proposal in the state house, Arkansas Rep. Brandt Smith (R), believes that S.B. 289 “provides a solution and a remedy to protect the rights of medical workers,” which he claims they need in order to object from doing certain surgical procedures, according to the Arkansas Democrat Gazette. He cites similar law in Mississippi and Illinois that has yet to be challenged in court.

Smith also “vetted” the law with the Alliance Defending Freedom, an anti-LGBTQ hate group as designated by the Southern Poverty Law Center (SPLC).

The House Minority Leader, Tippi McCullough (D), commented in response, “Why do you need a remedy for something that’s not happening?” She believes that the law will give license to those who “will use this to discriminate or to make folks feel uncomfortable in a lot of ways.”

“To take one of our liberties, religious freedom, to believe as you wish, and to twist it to infringe on other’s rights, even medical rights, is reprehensible.”

The bill lists protected health care professionals including doctors and nurses and any “individual who furnishes or assists in the provision of a healthcare service” including social workers and pharmacists.

The bill even mentions employers who provide health care as part of their employees’ compensation – even they can ask that employees be denied a specific medical procedure, as long as they claim that their “conscience” requires them to.

It says that no one can take any action against a health care provider who refuses to provide care because of their conscience, including bringing a lawsuit against them.

The National Center for Trans Equality (NCTE) found in 2015 that 33 percent of respondents in one survey believed they had been mistreated, harassed, or physically assaulted by a doctor or other medical provider within the past year, and eight percent reported they were turned away altogether. Advocates believe this will only exasperate similar numbers.

Now, the proposal goes to Gov. Asa Hutchinson (R)’s desk. His office has written in statements that he is “neutral” on the law at the moment, so whether it goes into effect or not may depend on if he applies his signature to it.

LGBTQ advocates, but other activists as well, are concerned and are urging Hutchinson to veto the bill.

President of the Human Rights Campaign Alphonso David said in a statement, “SB 289 prioritizes individual providers’ beliefs ahead of patient health and wellbeing. The Arkansas legislature understood this when they rejected a similar bill four years ago and they would be wise to do the same again this session.”

Urging Hutchinson to reject the proposal, David added that this only “make it harder for LGBTQ Arkansans to receive the care they need.”

“Governor Hutchinson should veto this deadly bill,” Nick Fish, President of American Atheists said in a statement, adding that they find the Act to be one of the “most extreme and deadly anti-LGBTQ healthcare bill” in the country.