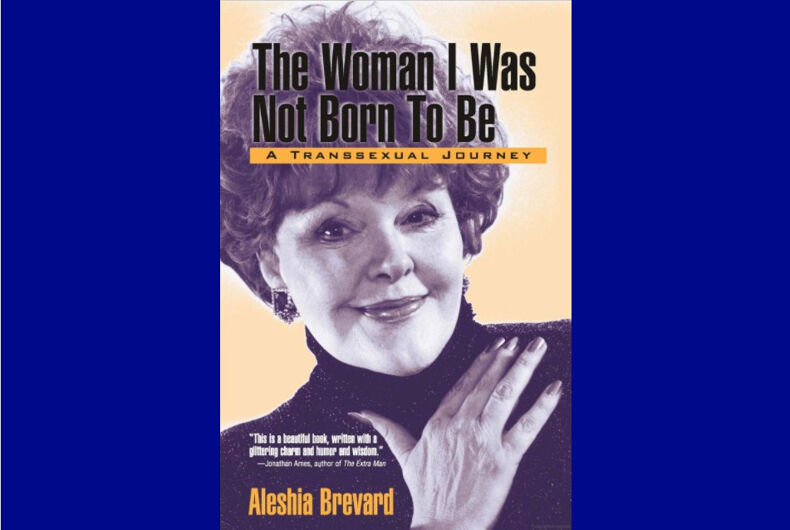 “I’d never read a transsexual’s memoir and was not even aware that many existed.”

That confession is from the final chapter of Aleshia Brevard’s autobiography, The Woman I Was Not Born to Be: A Transsexual Journey, which was released twenty years ago.  That finale (titled The Finished Product) is about her journey beyond transitioning between genders to transitioning from someone who denied her own history to someone who embraced it.

Related: 7 queer memoirs that will make the perfect holiday gift

By 2005 she was featured prominently in Susan Stryker’s documentary Screaming Queens: The Riot at Compton’s Cafeteria, as a veteran of the legendary San Francisco club, Finocchio’s.

If, as the 21st century began, Brevard truly wasn’t aware of many trans memoirs, I hate to say that she wasn’t missing a lot.  Some that she would have had access to are still required reading as well as being readable.

Conundrum, for example, had the good fortune of being penned by a trans woman who was also a gifted writer – Jan Morris, who died late last year at 94.  There are plenty of others that are the stories of noteworthy trans people and which will always be a source of historical nuggets for researchers (Christine Jorgensen’s A Personal Autobiography, Renee Richards’ Second Serve, and April Ashley’s Odyssey to name but a few), but just aren’t enthralling reads for reading’s sake.

I actually don’t know if Brevard’s memoir has ever found a significant audience outside of the trans community.  If it hasn’t, then it is cis folks’ loss.

To be sure, a good chunk of the book deals with her transition and her life leading up to it.  “From my earliest years I’d known that something was wrong with me,” she recalls, with words more than a few trans women have spoken in one form or another.  “It was about who I was, about the boy I was presumed to be. I’d been subjected to all the traditional male training and none of it took.”

Those early years were in Tennessee and could have been far worse had her parents not ultimately been accepting (not that it was always easy for them, but there was no abandonment).  Transition occurred on the West Coast (“My life began at Westlake Clinic…in 1962,” she remarks).  And there are plenty of gory details about multiple medical procedures.

But there are other details – gory in a sense, but in a much different way – about 1960’s Hollywood. Her show business career was not limited to the drag stage.  After transition, she managed to obtain a few small roles on television and in mainstream movies.  Many are akin to Tula Cossey’s scene in For Your Eyes Only in that if you know who she is and what she looks like, you’ll easily spot her.

She pops up multiple times as one of the Pussycats in The Love God?, one of Don Knotts’ post-Andy Griffith Show films.

And speaking of Andy….

If you don’t want your illusions of the perpetual sheriff of Mayberry to be shattered, skip over the passage covering her encounter with him.  Now he doesn’t do anything that would put him on a modern-day “cancel” list, though it likely would have gotten him a thorough talkin’ to from Aunt Bee.

Brevard also encounters the cast of the Beverly Hillbillies and provides a behind-the-scenes glimpse of Donna Douglas.

“I suspected the actress was a wee bit older than the fresh-faced Elly Mae she portrayed onscreen,” she quips. “If caulking one’s face could fool the camera, I needed that information.”

There was a good bit to her show business career that didn’t involve Hollywood.  Along her life’s journey she attended East Tennessee State University, obtaining a bachelor’s and master’s degree and eventually teaching as well as doing serious acting onstage.

I had the pleasure of chatting with Brevard once via e-mail – about a somewhat less serious role on television, one that I’m still ashamed to say I missed in first-run because, at the time, I was all about anything even remotely related to comic books.

In Legends of the Superheroes, a truly awful pair of 1979 live-action specials, Brevard played Giganta. The second special was a faux celebrity roast hosted by – and I wish I was kidding – Ed McMahon.  Mixed in with the roasting was a proto-ET Tonight-esque “interview’ with Giganta and her lover, the Atom.

She doesn’t touch on that television escapade in The Woman I Was Not Born to Be.  Our chat about it occurred just prior to the advent of YouTube, where it is now available (whether those who appeared in the two specials want them to be or not).  At the time, they were considered somewhat lost.  She was surprised that I’d located copies (multiple-generations-old bootlegs, but copies nevertheless) of them.

Sadly, even now there will be plenty of people surprised to learn that a trans showgirl from Erwin, Tennessee – even one with multiple university degrees – can write a damn good book.

Trans women can do a lot of things when we’re allowed to.

But a part of her story involves the reality that, had she been out about the reality of her life during much of it, many of those opportunities wouldn’t have happened.  It’s a life experience that, hopefully, fewer and fewer of us will have to experience.  And hers is one worth reading about – even fifty years after so many of the events occurred and twenty after the book was published.

Can Biden deliver on his promises? We’ve got real talk on this week’s LGBTQ Nation podcast.