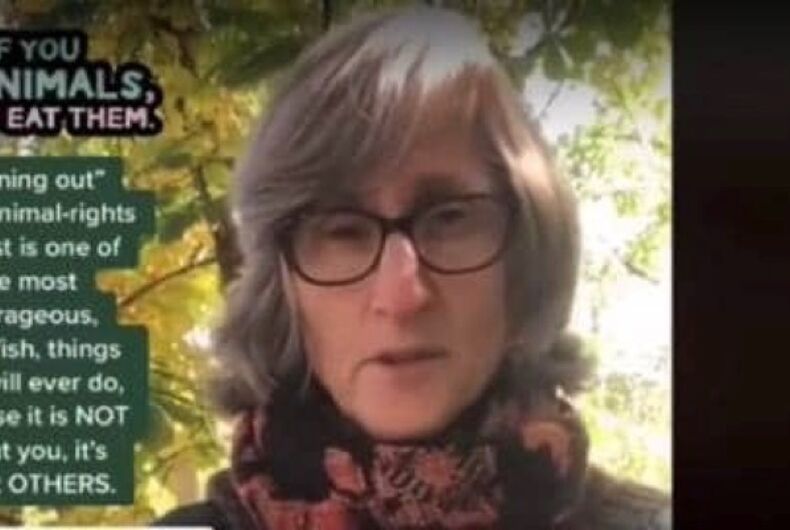 "That Vegan Teacher" is doubling down on some ridiculous claimsPhoto: Screenshot

TikToker “That Vegan Teacher” opened up a can of worms when she told her followers that coming out as an animal rights activist was less “selfish” than coming out as a member of the LGBTQ community.

And when she drew the inevitable blowback, she doubled down and tried to “explain” her reasoning.

The woman has several other social media channels where she “helps” people become vegan under various names – “Miss Kadie on Spotify” and “Miss Karen” on YouTube among them. She has 1.7 million followers on TikTok alone.

She frequently responds back to viewer comments and in a now-deleted video answered someone who had told her “Coming out as vegan is not as special as coming out as gay/lesbian. I am lesbian myself. Vegan is a diet, not sexuality.”

“It’s not talking about the things you’re going to do to better the world. Coming out as an animal rights activist is talking about the animals — others, not just you. In fact, it is a completely unselfish thing to do.”

Outrage quickly spread on social media, other YouTube and TikTok videos were created to denounce her comments, and soon enough Kadie/Karen was back to… excuse her comments and blame everyone for overreacting and “twisting my words.”

“So you’re basically saying I should rather force myself to be straight, but don’t drink milk,” one comment she highlighted said. Kadie/Karen quickly accused the person of “twisting my words” to troll her and then offered an “explanation” that will surely require another.

“I am saying that it is OK to be part of the LGBTQ community and that everyone should strive to be vegan,” she began nicely enough. She should have stopped there.

“All of you people who talk about being oppressed should understand that you are also the oppressors. You are oppressing the animals every single time that you pay for hamburgers at McDonald’s, chicken wings at KFC, any of the other things on your plate that involve dead animal parts.”

“If you are choosing to buy cow’s milk instead of soy milk, you are part of the problem. You are an oppressor,” she continued.

“You don’t like being treated badly then don’t do it to the animals. Start to be better. Be brave and be vegan.”

And then she put up the video decrying “veganphobia,” because it is just as bad as homophobia and transphobia. The results were similar.

Unconcerned by the hurt human feelings and casual disregard for her comparisons, the poor oppressed vegan implored everyone to #endveganphobia and celebrate #veganpride.