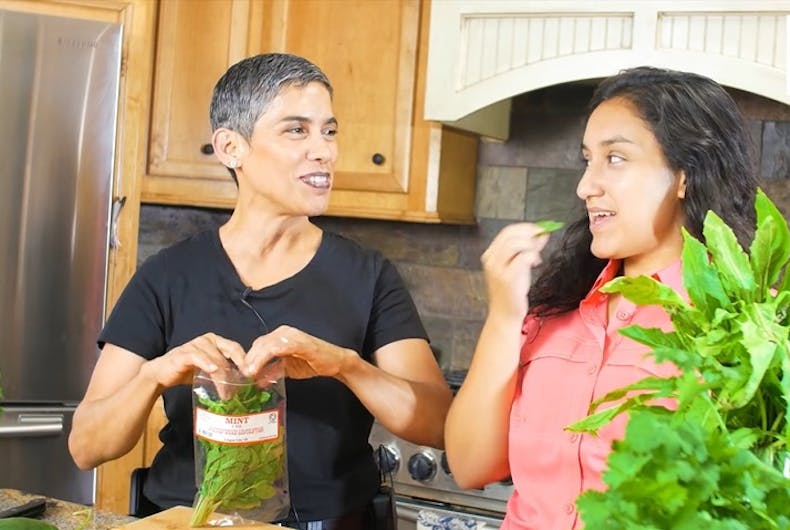 Mari Lopez with her niece Liz Johnson in a juicing videoPhoto: YouTube Screenshot

A woman who claimed her faith in God turned her “ex-gay” and that veganism and juicing cured her stage 4 cancer has died from the disease.

Mari Lopez teamed up with her niece, Liz Johnson, for a series of YouTube videos where the pair claimed her faith and her diet had healed her.

Lopez’s cancer began in her breast, and when it moved to her blood, liver, and lungs, she decided to try chemotherapy and radiotherapy, but by then it had spread too aggressively and it was too late to save her life. She passed away in December of 2017, according to a video Johnson posted last week.

The aunt and niece team had been giving tips for others who wanted to follow in Lopez’s footsteps, and even showcased individuals who had also claimed to have beaten cancer in part through diet and religious faith, in spite of a complete lack of scientific evidence.

Lopez said in one such video that she had asked God to use her “in a way that would bring Him honor” and for her to have “a place where people can find me.”

“I felt like, there’s a need, because as far as I’m concerned, every time I turn around they’re building a new hospital. And there’s so much need for spiritual people to rise up, and people to help, the army of God to wake up and help,” she added, saying she had asked God to use her as a vessel.

“Be very suspicious of any treatment that says it can cure cancer,” the American Cancer Society warns. “Claims that a treatment can cure all cancers or that it can cure cancer and other difficult-to-treat diseases (including chronic fatigue, multiple sclerosis, AIDS, etc.) are sure to be false.”

It also has a checklist to help identify scams, including techniques seen throughout Lopez and Johnson’s videos, such as being “offered personal stories of amazing results, but no actual scientific evidence,” and “attack[ing] the medical or scientific community.”

Lopez also claimed in one of the videos that her faith “cured” her of being gay.

“I, as accepting God in my life, I viewed [homosexuality] as, what I’ve read in this Bible, that it’s wrong,” she said. “So I made a choice. And I said, ‘Lord, if it says in this Bible [that it’s wrong], and you killed two big cities, Sodom and Gomorrah, for this conduct, you know, I don’t wanna die. It’s survival mode.”

So-called conversion therapy, also sometimes called “pray away the gay,” has been debunked and, like relying on diet to cure cancer, has been shown to cause harm.

It can be so damaging, in fact, that it has been banned in ten states, and the District of Columbia. Washington state is also set to join the list as the latest state to outlaw the practice.

As she was dying, Lopez asked her niece to take down the videos. Her niece has not granted her dying aunt’s wishes.

Johnson blames Lopez’s death on her mother, Lopez’s sister, convincing her to eat meat and undergo traditional forms of treatment.

“What happened was, as Mari was living with my mom, my mom started to tell her that she needed to eat meat now,” Johnson told Babe.

“She said it was OK to use things that she didn’t want to use. My aunt was very against the microwave because of cancer-causing issues with that, and my mom would cook her things using the microwave.”

She said that she believed her aunt would still be alive had she continued to be vegan.

In Johnson’s most recent video, she also blames Lopez’s death on her being “inconsistent” in her “spiritual life.”

Johnson told Babe she intends to keep the videos up, as she believes they may help others, and that she plans to upload new videos dealing with health and financial issues.