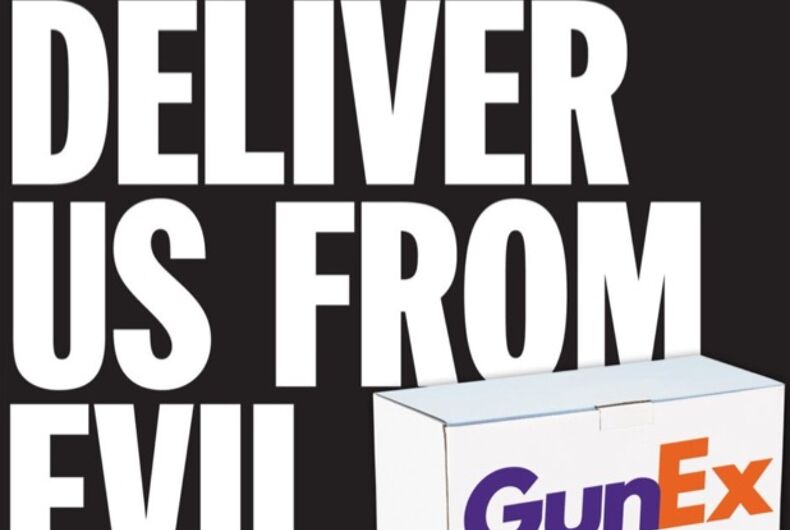 National Rifle Association opponents are chasing away companies that provide discounts to NRA members as a social-media firestorm continues.

Now getting flak are FedEx for its member discounts and Amazon, Google and Apple are under pressure for streaming NRA television, USAToday reports. Thousands have signed onto a change.org petition directed towards Amazon.

DELIVER US FROM EVIL:
Pressure is building for businesses like FedEx to boycott the NRA.https://t.co/O3rkbDHwHj pic.twitter.com/2Q4Q1hef5H

USAToday says that countless users of social media have threatened to boycott companies that maintain ties to the NRA.

ThinkProgress, a liberal site that’s an editorially independent project of the Center for American Progress, has led the firestorm.

Igor Volsky, deputy director of ThinkProgress’s @capaction, urged his twitter followers to continue to go after FedEx this morning.

Good morning everyone!! Pls take a moment to call and email @FedEx this am. Ask them to break ties with @nra! #NRABoycott https://t.co/tKjH18HGVE

Volsky has been at the forefront of Twitter shaming politicians after gun violence. He was a leader in the movement to retweet their “thoughts and prayers” tweets with their actual NRA donations.

First National Bank of Omaha started the retreat on Thursday. An outburst of customer complaints prompted the company to stop offering its NRA-branded credit card. “Customer feedback has caused us to review our relationship with the NRA, the bank posted on Twitter.

Customer feedback has caused us to review our relationship with the NRA. As a result, First National Bank of Omaha will not renew its contract with the National Rifle Association to issue the NRA Visa Card.

Enterprise Holdings, which operates Enterprise, Alamo and National rental-car companies, followed suit on Thursday. It will end discounts to NRA members on March 26.

Then the social-media backlash propelled a number of other companies to sever ties this weekend:

“The moves suggest the NRA is losing a degree of support in the corporate world amid the firestorm of criticism over the group’s support for gun rights despite recent killing sprees,” USAToday reported.

The NRA shot back at the fleeing companies with a statement on Saturday: “Some corporations have decided to punish NRA membership in a shameful display of political and civic cowardice.”

NEW: The National Rifle Association responds to the growing number of companies ending their corporate partnerships since the Parkland school shooting: "Some corporations have decided to punish NRA membership in a shameful display of political and civic cowardice." pic.twitter.com/Wnabe0GFea

Dana Loesch, the NRA spokeswoman who participated in the CNN town hall on Feb. 21, only aggravated the complaints. At the Conservative Political Action Conference on Feb. 22, she threw fuel on the flames.

“Many in mass media love mass shootings,” Loesch said. “I’m not saying you love the tragedy, but you love the ratings. Crying white mothers are ratings gold.”

Related: The NRA’s comments at CPAC were even worse than expected

Meanwhile, thousands lined up for a gun show in Tampa on Saturday, the New York Daily News reports.

NRA supporters have accused the protesting students from Marjory Stoneman Douglas High School to be crisis actors. Families of victims of the Feb. 14 massacre have even received death threats.

The student most criticized, 17-year-old David Hogg, said he is no such thing

“I am not a crisis actor,” Hogg said in response. “I’m someone who had to witness this and live through this, and I continue to be having to do that.

“I’m not acting on anybody’s behalf.”