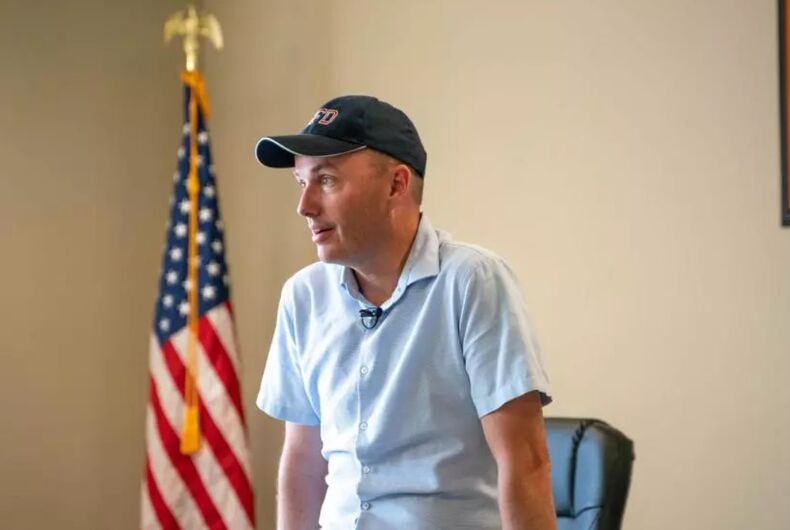 The governor of Utah got emotional at a press conference where he said he won’t sign a bill that would ban transgender girls and women from competing in school sports in its current form.

“I’m not in a place yet where I’m comfortable with the bill as it stands right now,” Gov. Spencer Cox (R) said at a news conference yesterday morning. “Those discussions are ongoing. We still have a lot of work to do.”

According to Deseret News, he then got emotional and teared up.

“These kids are- they’re just trying to stay alive,” he said. “There’s a reason none of them are playing sports.”

“I just think there’s a better way. And I hope that there will be enough grace in our state to find a better solution.”

“I apologize for getting a little emotional,” Cox continued. “When you spend time with these kids, it changes your heart in important ways, and so I want to try to improve that message and see if we can’t find a better way to work together.”

That’s not to say that he wants to treat transgender people equally. He told reporters that he believes that “people on both sides of the issue are actually right.”

“There’s a lot of passion, a lot of fiery rhetoric, a lot of name calling on both sides of the issue,” he added. “There are biological advantages with your birth gender. Those are biological facts, and nobody disputes that at all. It is also a fact that women’s sports has had a disadvantage for many, many years. We’ve gotten better but we still have a ways to go.”

He was discussing H.B. 302, a bill that would ban girls “of the male sex” from participating in school sports. Sex is defined in the bill as “biological, physical condition of being male or female, determined by an individual’s genetics and anatomy at birth.”

Cisgender girls and women will also be allowed to sue if they compete against a transgender girl or woman.

The bill has already passed the state House of Representatives with a 50-23 vote and has been sent to the state Senate. Both chambers are overwhelmingly controlled by Republicans.

Democrats spoke out against the measure before it passed.

The state legislature is also considering a bill that would criminalize doctors who provide gender-affirming health care, including puberty blockers, for transgender youth. That bill is currently still in committee.