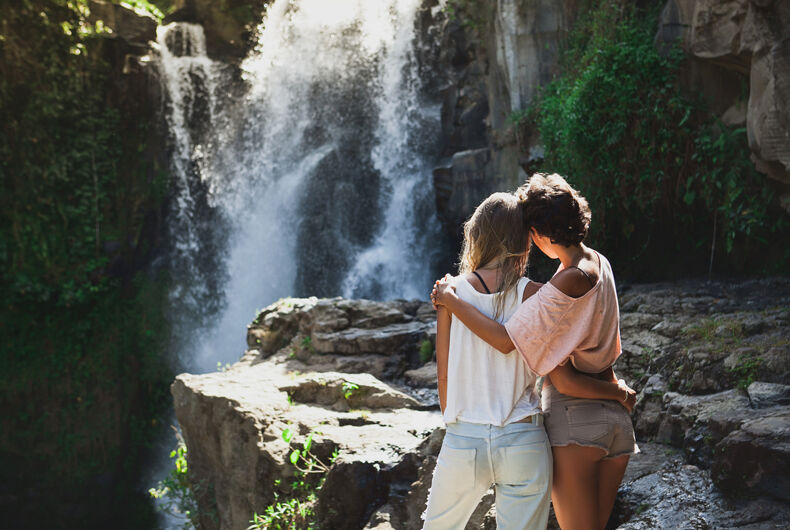 Last month a young American named Kristen Gray tweeted about her life as a “digital nomad” in Bali, Indonesia. She wrote about how great it was, as an American, living in a country like Indonesia, with its much cheaper cost-of-living.

She also talked about how LGBTQ-friendly she found Bali as a queer woman of color. And she also said she could advise people how to get into Bali, despite the fact that Indonesia is closed to tourism due to COVID. Cue a social media firestorm, including some very pointed feedback from Indonesians themselves.

Related: Woman gets handwritten apology & a new pride flag from the person who kept tearing it down

Straight Indonesians were mad at her for her tone-deaf bragging about her “great” life in a country with some serious poverty issues, and for encouraging people to violate COVID restrictions. LGBTQ Indonesians were upset with those things too, and also for the way she portrayed the country as being gay-friendly, which it definitely isn’t, at least for the locals.

In fact, last month, two gay men in the Indonesian province of Aceh were lashed seventy-seven times for having sex — the third time such a thing has happened in the province since 2015 when the semi-autonomous region was allowed to enact Sharia law.

As with almost everything in life, travel to poorer countries as a gay American is complicated, especially if the country is homophobic.

We’re two gay digital nomads who have sometimes lived in less than LGBTQ-friendly countries, and we’ve often asked ourselves: Is it ethical to visit these places? And if we do go, how should we and all LGBTQ people behave?

At the very minimum, bragging about the “lower cost of living” in poorer countries is never a good look. What may be true from an American point of view looks very different from the perspective of locals, who often earn shockingly low wages. Worse, there might be no social safety net, with struggling people relying entirely on charity or support from their families.

And let’s just say it outright: the reason why things are so “cheap” in developing countries is often that those places were exploited for centuries by richer countries (and probably still are). The reason many rich countries are wealthy in the first place is because of centuries of colonialism.

Traveling to poorer countries means acknowledging all this Western Privilege — repeatedly and often.

The technical term for this is: Not Being a Dick.

As travel writers, we haven’t hesitated to share financial details about our lives in countries like Bulgaria, or Georgia (in Eastern Europe), or Thailand where, yeah, things are much more affordable for us than in America.

But we point out why this is.

We’ve also asked ourselves if it’s ethical to visit or live in these countries. Does our presence say we approve of those country’s intolerant practices?

We say no. Indeed, under Trump, America arguably had a homophobic government, but no one ever suggested the entire country should be held responsible for the policies of his administration.

Here’s something else to consider: at the risk of sounding like “gay saviors,” LGBTQ travelers help normalize being gay. Homophobic or deeply religious people get exposure to gay people they may never have had before. Stereotypes can’t help but fall.

As we travel, we also support gay-friendly businesses, which are vitally important in normalizing LGBTQ people and causes, but which often struggle in repressive countries.

We have yet to visit Bali, but we asked some Indonesian locals: Should LGBTQ foreigners avoid their country?

The owner of one LGBTQ-friendly business (who asked not to be identified) told us: absolutely not! A boycott would hurt gay locals much more than it would help.

Another gay Indonesian, who splits his time between Canada and his home country, said LGBTQ tourists coming to his country has absolutely been a net-positive: “Look at what happened with Bali. Gay bars and resorts opened, and it was initiated by foreigners. They fought for LGBT businesses in Bali for such a long time and now, because of that, it’s becoming more accepting towards LGBT people. In short, yes, more gay tourists coming would be very helpful.”

But like Spiderman says, with great power comes great responsibility.

So here’s something else to consider — a place where Kristen Gray apparently dropped the ball: when visiting any country, you’re a guest, and it’s your responsibility to respect the local culture and customs, and (within reason) to obey their laws, including the ones regarding COVID.

We’re currently living in Puerto Vallarta, Mexico, and we’ve been embarrassed by some recent bad behavior by gay tourists. Gay bars, hotels, and beaches have been packed with gay and bisexual men flouting rules about wearing masks and social distancing — even as infections and deaths from COVID have skyrocketed in the state of Jalisco.

There’s also been a series of incidents of gay men openly having sex in public areas.

And White Party promoter Jeffrey Sanker went to great lengths to host a circuit party in Puerto Vallarta, despite local restrictions against such a large gathering during a pandemic.

Puerto Vallarta has been pretty progressive, especially by Mexican standards, but now an anti-LGBTQ backlash is brewing. A local church has begun picketing a new gay bar.

Even some LGBTQ Mexicans are upset. One gay man told us, “As a community we demand rights, we demand respect, but what [most local people see are] guys having sex on a balcony or on a public beach… As visitors, we have the obligation to take care of the local community, respect each other and preserve healthy behavior. Being gay doesn’t justify not practicing the rules of society and of good behavior.”

Traveling to homophobic countries, like maybe everything in life, comes down to one very simple rule: Don’t Be a Dick.

Brent Hartinger is an author whose latest book, Project Pay Day, is available for preorder, and Michael Jensen is the former editor of AfterElton.com. Visit them at BrentAndMichaelAreGoingPlaces, or on Instagram or Twitter.

Ellen talks to country music star T.J. Osborne about how coming out is “awkward & uncomfortable”