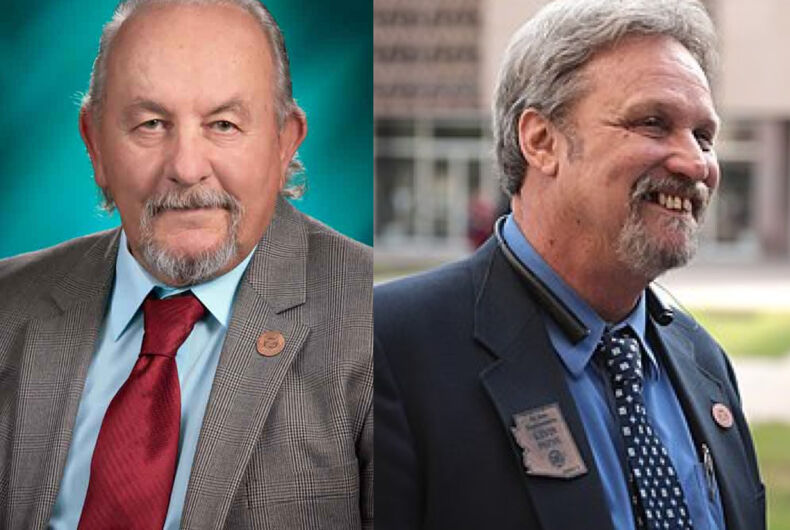 Arizona Republicans are pushing a proposed law that would require the state to include an individual’s sex on all state-issued documents. That would bar the state from allowing anyone of a gender identity different from their sex assigned at birth from being properly identified on birth certificates, driver’s licenses, and other documents.

While arguing for the proposal, two state legislators — Reps. John Fillmore (R) and Kevin Payne (R) — railed against trans and non-binary people. Fillmore compared a non-binary person to someone identifying as “a chicken,” while Payne allegedly called the child “it.”

Megan Mogan, the mother to the 15 year-old non-binary child, had testified prior to Fillmore and Payne made their comments at the February 10 hearing.

“I proposed this bill just to give clarity in government documents and was hoping to avoid the whole gender identity issue on the gender dysphoria,” Fillmore said. Then, he turned to other lawmakers and asked, “what’s going to happen when someday someone wakes up and they want to go to a far extreme and identify as a chicken or something for crying out loud. Where do we draw the line?”

He claimed that “the gender dysfunction thing… [allows] men to enter into the restrooms of the little girls and creates situations that I don’t think are beneficial to society and the nuclear family as a whole.”

Payne, meanwhile, “continuously disrupted public testimony,” and allegedly asked quietly while Mogan was testifying about her child, “so it doesn’t know who it is?”

“It’s dehumanizing any trans or non-binary person in their state,” Mogan said in an interview afterwards. “Most people in Arizona, including myself, never thought about how our identity-related documentation spills into every facet of our life and every space we enter because we don’t have to think about it.

“I don’t think you have to be the parent of a nonbinary person, you can just be the parent of anyone, and if someone dehumanizes your child, it’s like one of the worst possible feelings you can have,” she added.

State Rep. Stephanie Stahl Hamilton (D) expressed that Fillmore doesn’t know the difference between trans people and non-binary or gender non-conforming people before proposing the bill. “Let’s be clear that a person can identify as male, female and non-binary, that’s just a simple self-identification. When you talk about transgender, that’s moving from one gender to another,” she said.

Bridget Sharpe, director of the Human Rights Campaign’s Arizona chapter, said “I truly don’t think [Fillmore] understands what this means for nonbinary Arizonans… [he] doesn’t understands the gravity of what he said.”

Riley Behrens, an activist and trans man that was in the chamber and overheard Payne’s remarks, filed ethics complaints against both Representatives. “This is unacceptable behavior and [it] will not be tolerated,” he wrote on Twitter.

Fillmore claimed that the outrage that was expressed by fellow legislators and observers were mischaracterizations. He called Behrens’ complaint “entirely without merit” and asked people to “listen to my actual remarks,” which he claims “do not remotely match the distorted version critics have alleged,” although available footage of the session shows otherwise.

After the state party issued the statement for him, Fillmore then contacted NBC News directly on February 13 to further conflate the difference between sex and gender identity and say “this whole darn conversation is just childish silly.”

He likened trans and non-binary people’s gender identity to the definition of colors. “When a person wants to change the meanings of words because of their ‘feelings’ how can a society have a reasonable discussion about anything,” he whined, “if for instance they feel the word ‘blue’ is in fact ‘red’ to them, and then add the word ‘green’ to the color ‘yellow,’ now try to go have an intelligent conversation with an oil artistic painter.”

Payne, for his part, allowed the party to speak for him so far. The director of communications for the Arizona House Republicans, Andrew Wilder, told NBC News that “Payne has stated that he does not recall saying anything like what is alleged in the complaint, nor are such words by him heard in the committee hearing video.”

Arizona House Bill 2725 made it out of the Government & Elections committee on a 7-6 vote and will now go before the House Rules Committee.

Here are Rep. John Fillmore’s full remarks from earlier this pm about his bill HB2537 that requires documents issued by AZ agencies to only have a person’s gender as male or female. What Fillmore said shook this parent of a non-binary child and other lawmakers on the panel #azleg https://t.co/qizZXBkQuh pic.twitter.com/tmCJ9uTJyJ

A few minutes ago, I filed ethics complaints against two #azleg lawmakers after several discriminatory comments in House Gov. One called a non-binary child “it” and the other compared LGBT community members to farm animals. This is unacceptable behavior and will not be tolerated. pic.twitter.com/V0K4k48jSJ