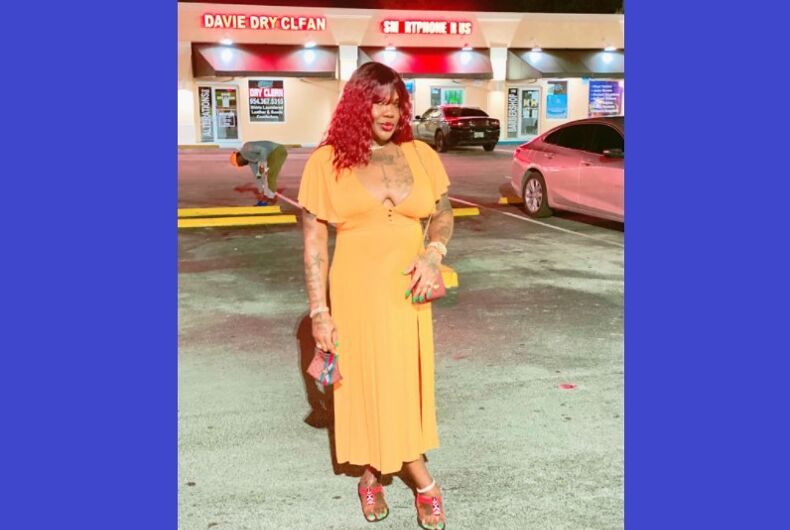 Alexus Braxton, a 45-year-old transgender woman who lived in Florida, was found shot to death earlier this month.

Police officers pronounced her dead on February 4 when they found her in her apartment in Miami. Investigators believe that her murder may have been a hate crime.

“We’re not discarding the possibility that it can potentially go that route as an additional charge,” a Miami Police Department representative told Gay City News. “But as of right now we’re definitely needing the assistance of anyone who can give us any information.”

The department, though, said that they don’t want to release more information about her death because they worry that it could compromise the investigation. Anyone with information is encouraged to call 305-471-2400.

“Our hearts are heavy as we mourn the tragic loss of Alexus ‘Kimmy Icon’ Braxton, the beloved daughter of a Board Member of The Hollywood LGBTQ Council,” the organization said in a Facebook post. “Her life had so much value and meaning and action MUST be taken in our communities to show that Black Trans Lives Matter.

According to HRC, at least 44 transgender people were violently killed in 2020, making it the deadliest year on record for trans people. Most of the victims were Black or latina transgender women.

Our hearts are heavy as we mourn the tragic loss of Alexus 'Kimmy Icon' Braxton, the beloved daughter of a Board Member…

Posted by The Hollywood LGBTQ Council on Monday, February 8, 2021