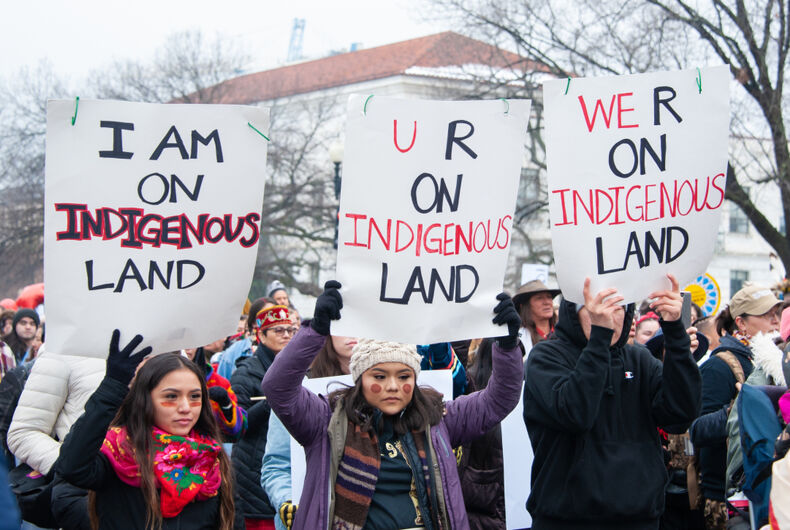 Who knows the answer? And who considers these questions significant? Can we progress as a united people without a basic starting entry point of the legacy of history we all share?

Related: The lessons my Uncle Lloyd taught me belong to Black History Month

Unless you are a member of a tribal nation who continues to live upon your tribal lands, the land on which you reside was stolen by white European-heritage primarily Christian men for their personal use and financial advantage.

A concept that some people find extremely difficult to understand is that the notion of “American exceptionalism” and “meritocracy” is a lie, a myth perpetuated by the white male Christian ruling capitalist elite to erase the foundational racist hierarchy of power and privilege on which the country was founded and continues.

The so-called Founding Fathers were rebelling against white Christian rule from Europe but advocated for rule by white European-heritage Christian men in North America.

The expansion of the republic and movement west, in part, they justified by overriding philosophical underpinnings since the American Revolution. Called “Manifest Destiny,” it was based on the belief that God intended the United States to extend its holdings and its power across the wide continent of North America over indigenous peoples from east coast to west. The doctrine of “manifest destiny” embraced a belief in American Christian Anglo-Saxon superiority.

The Naturalization Act of 1790 excluded Native American Indians from citizenship, considering them, paradoxically, as “domestic foreigners.” They were not accorded rights of citizenship until 1924 when Congress passed the Indian Citizenship Act, though Asians continued to be denied naturalized citizenship status.

During the early years of the new republic, with its increasing population and desire for land, political leaders, such as George Washington and Thomas Jefferson, advocated that Indian lands should be obtained through treaties and purchase.

President Jefferson in 1803 wrote a letter to then Tennessee political leader, Andrew Jackson, advising him to convince Indians to sell their “useless” forests to the U.S. government and become farmers. Jefferson and other government leaders overlooked the fact that this style of individualized farming was contrary to indigenous peoples’ communitarian spiritual and cultural traditions.

Later, however, when he inhabited the White House, Jackson argued that white settlers [a pleasant term for “land thieves”] had a “right” to confiscate Indian land. Though he proposed a combination of treaties and exchange or trade of land, he maintained that white people had a right to claim any Indian lands that were not under cultivation. Jackson recognized as the only legitimate claims for Indian lands those on which they grew crops or made other “improvements.”

The Indian Removal Act of May 28, 1830, authorized President Jackson to confiscate Indian land east of the Mississippi River, “relocate” its former inhabitants, and exchange their former land with territory west of the River. The infamous “Trail of Tears” during Jackson’s presidency attests to the forced evacuation and redeployment of entire Indian nations in which many died of cholera, exposure to the elements, contaminated food, and other environmental hazards.

A mid-19th century Christian missionary wrote: “As tribes and nationals the Indians must perish and live only as men, [and should] fall in with Christian civilization that is destined to cover the earth.”

The notion of ceding state or national lands stolen from First Nations people was introduced in the U.S. Congress by Representative Justin Smith Morrill of Vermont in 1857 as his “Land Grant Act.” It was, however, vetoed by President James Buchanan.

Morrill resubmitted the measure in 1861, and the new President, Abraham Lincoln, signed the Morrill Act into law in 1862. Following its passage, the government granted lands to railroad companies, as old-age pensions, homesteads to farmers, and to colleges and universities.

These “land-grants” were given federally to the states for them to sell for the purpose of raising funds or to endow to “land-grant” colleges and universities. As stated in the provisions of the 1862 Act, the mission of these institutions of higher education was to focus on the teaching of practical agriculture, science, military science, and engineering without excluding the humanities in response to the expanding industrial revolution.

As an afterthought, not until 1994 with an expansion of the Land Grant Act, tribal colleges and universities were “given” land-grant status by the federal government.

Several universities have begun to acknowledge the people of the lands taken to establish their campuses. My former employer, Iowa State University in Ames, Iowa announces its “Land Acknowledgement” statement at several campus events:

Iowa State University aspires to be the best land‐grant university at creating a welcoming and inclusive environment where diverse individuals can succeed and thrive. As a land‐grant institution, we are committed to the caretaking of this land and would like to begin this event by acknowledging those who have previously taken care of the land on which we gather. Before this site became Iowa State University, it was the ancestral lands and territory of the Baxoje, or Ioway Nation. The United States obtained the land from the Meskwaki and Sauk nations in the Treaty of 1842. We wish to recognize our obligations to this land and to the people who took care of it, as well as to the 17,000 Native people who live in Iowa today.

This statement, however, does not “acknowledge” the reasons compelling tribal nations to sign over their lands to white people who overhunted indigenous peoples’ food sources and invaded neighboring territories squeezing native peoples onto smaller and less productive lands.

Additionally, the phrase “the people who took care of it” virtually whitewashes and downplays the claim to the land by its original inhabitants, as if they were mere caretakers waiting for its rightful owners (white people) to claim it.

A Land Without Common Memory

A quote frequently shared by one of my university students, a member of the Nipmuc Nation, one of the original peoples in what is today known as Massachusetts, was stated by the Indigenous Leader George Erasmus, “Where common memory is lacking, where people do not share in the same past, there can be no real community. Where community is to be formed, common memory must be created.”

This student refers to a story the U.S. tells itself: “a land of discovered lands, God’s chosen people, exceptionalism, opportunities, a Christian nation, etc.” He refers to land on which its people tell itself a story of its exceptionalism and benevolence, which “is ingrained in our society and inculcated within our system of jurisprudence and our schools.”

“On the other hand,” he continues, “we have millions of people with the shared and lived experience of genocide, enslavement, forced removals, stolen lands, boarding schools, Jim Crow laws, and institutionalized racism, and on it goes.”