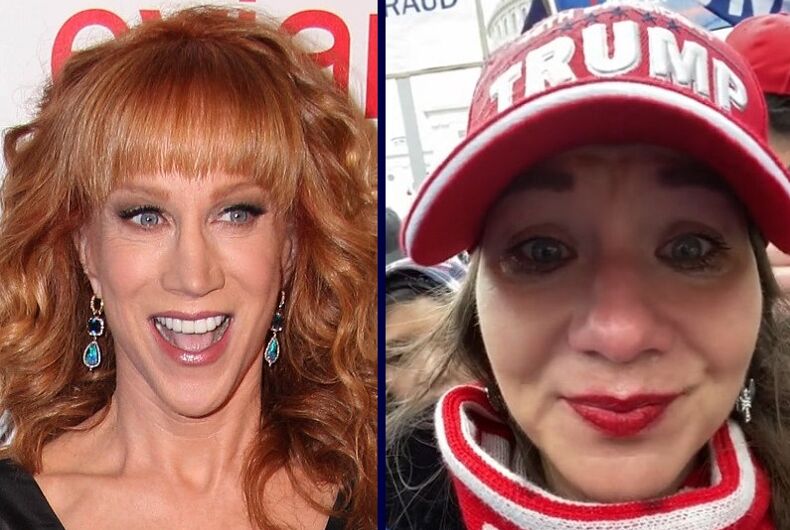 Comedian Kathy Griffin says she turned a conservative mommy influencer’s videos of herself at the MAGA riots to the FBI after the influencer tried to come for Griffin.

Danielle McCarty – who goes by “Muscle Mommy Fit” and “Fit Patriot Mom” online – called out Griffin on January 9 for tweeting an image with a plastic severed head that looked like Donald Trump and the words “Just resign now. You lost. Its over.”

Griffin was famously canceled in 2017 when she was in a picture with the fake severed head, which she said was a reference to Trump’s misogyny. She was investigated by the FBI, put on the No Fly List, lost sponsorship deals, and even her TV buddy Anderson Cooper denounced her.

Just after the MAGA riots on January 6 and as Democrats started Trump’s second impeachment, Griffin retweeted the image.

“The despicable Kathy Griffin is at it again,” responded “Fit Patriot Mom” McCarty on Twitter. Her account – @musclemommyfit – has since been deleted.

But Griffin retweeted a screenshot of McCarty’s tweet with the message: “Oh, you shouldn’t have tagged me. You were there on Jan 6. You pulled your video, but I found it. Looks like you’re a domestic terrorist and now we all know it, @musclemommyfit.”

Oh, you shouldn’t have tagged me. You were there on Jan 6. You pulled your video, but I found it. Looks like you’re a domestic terrorist and now we all know it, @musclemommyfit pic.twitter.com/BS20LHyHh8

Someone then sent Griffin an archived copy of a video McCarty posted to Parler, a rightwing social media platform. In the video, McCarty is in front of the Capitol with a red “TRUMP” hat on, saying that she and others around her just got teargassed.

“We got teargassed when we were in the middle of a prayer,” McCarty says in the video. “We weren’t even trying to rush the cops!”

“Hi Danielle,” Griffin said, sharing a screenshot of the video. “What’s that you called me, again? Ah yes, the despicable Kathy Griffin. Well, the FBI now has this video, as well as the other ones you’re featured in.”

Hi Danielle. @musclemommyfit
What’s that you called me, again? Ah yes, the despicable Kathy Griffin. Well, the FBI now has this video, as well as the other ones you’re featured in. 🤷‍♀️ https://t.co/kPgtAUAwnn

Griffin also re-tweeted images from McCarty’s now-private Instagram account, where her bio states that she is a “Patriotic woman❤️🤍💙 Lover of Jesus, America, Family and TRUTH🇺🇸🙏🏼🇺🇸.”

The posts, dated December 25, 2020, show her kids with military-grade rifles and other weapons. One of the kids even has their finger on the gun’s trigger, violating a basic gun safety rule.

“Sooo many wonderful presents this year!!!” McCarty wrote in the images’ caption.

In 2017, Griffin posted a video to social media where she held “a mask styled to look like the severed, bloody head” of Trump, which some people accused her of posting to incite violence against Trump but that she said was a reference to comments Trump made about then Fox News host Megyn Kelly.

In the ensuing controversy, Griffin and her family received death threats, she lost sponsorship deals, got fired by CNN, was investigated by the Department of Justice, and was even denounced by Anderson Cooper.

“I beg for your forgiveness,” Griffin said in a video on social media after she took down the original offending video at the time. “I went too far.”

Several months after the 2017 controversy, Griffin retracted her apology.