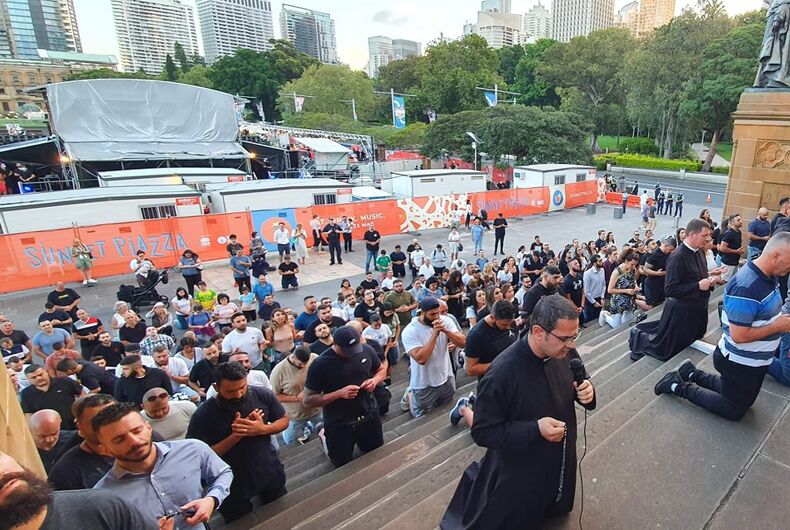 “Christian Lives Matter” (CLM) protestors chanted hymns in an attempt to drown out a gay variety show happening in a public space this past weekend.

The “Heaps Gay” variety show took place in an outdoor public space called the Sunset Piazza in Sydney, Australia this past Saturday, and someone printed up an unofficial flyer to advertise it that showed the facade of St. Mary’s Cathedral, which is right next to the event space.

This bothered some Christians, who decided to hold a mass public prayer on the steps of the cathedral at the same time as the gay variety show.

“As the cathedral forecourt is council land and not church property, the decision about the content of the concert and its advertising is unfortunately not ours to make,” Sydney Archbishop Anthony Fisher, who has spoken out against marriage equality in the past, said in a Facebook post before the performance, getting his followers riled up.

“It is frustrating and upsetting that St Mary’s Cathedral, the mother church of Australia, has been used so provocatively to promote this event and such little sensitivity shown to people of faith.”

“Time to really show up and defend our church and our faith. The most powerful way is through prayer,” said one of the CLM organizer’s social media posts. Pedestrian.tv reports that that organizer didn’t even attend the event because he’s currently in Lebanon.

They gathered at 6 p.m. and held a mass prayer of the rosary before they started singing hymns.

“Soldiers of Christ standing outside St Marys Cathedral singing ‘Jesus remember me when you come into your Kingdom’ after rosary facing the Gay and Queer concert,” said one of the organizers on Facebook after the event.

“They were trying to drown out the music with hymns,” one of the variety show performers said. “You could definitely see and hear the Christians.”

Video posted to Instagram, though, shows that the hymns were no match for the actual sound system that the variety show was using.

Despite the ridiculous name of their protest, one of the organizers wrote a post on Facebook saying that it’s great they’re getting media attention.

“Remember they crucified Jesus on the Cross on the wood of shame, which was meant to be the most humiliating way to die, yet Our Lord turned it into the wood of salvation and the Crucifixion paved the way for the Resurrection,” Charlie Bakhos wrote in a post.

“Sporty Spice” says she sometimes wished she was a lesbian