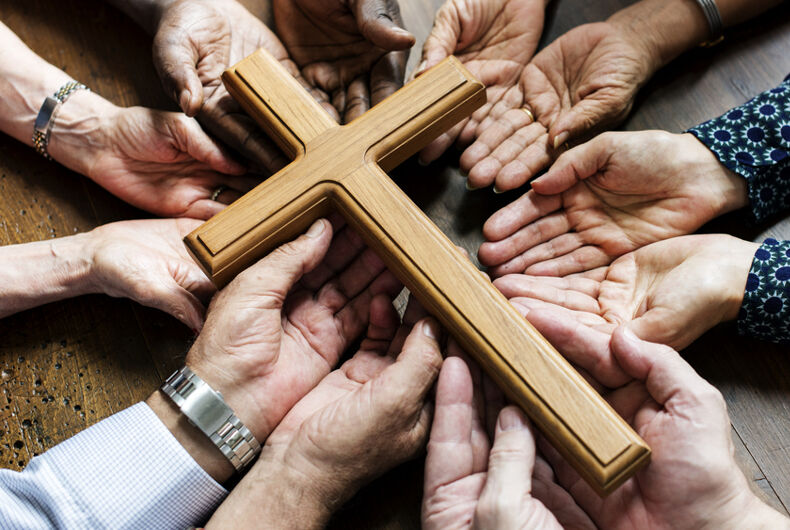 The former director of a prominent conversion therapy program is now facing charges in connection with the sexual abuse of an underage boy.

Uniting Church pastor Ron Charles Brookman, 70, pled not guilty to a charge of indecently assaulting a person under 16 years of age under his authority that stemmed from allegations that he molested a 13-year-old boy while he was Senior Pastor of the Newtown Mission Uniting Church in Sydney in the 1980’s.

As he left court on Tuesday after entering his plea, he was holding his wife Ruth’s hand, smiling. Reporters asked if he was innocent, and he said, “Of course.”

In 1999, Brookman became the director of Living Waters, one of the biggest gay conversion therapy programs in Australia, and retired in 2014.

Living Waters, which was profiled in 2016 by the Australian Women’s Weekly, was founded with the sole mission of converting gay people, or, as it likes to call it, “sexual and relational brokenness.”

People who worked with the program said that homosexuality was usually caused by sexual abuse but could also be caused by “disgusting” television shows.

In the profile, Brookman said that he is one of the ex-gay movement’s “success stories.” He said that he used to lead a double life – pastor by day, gay scene queen by night – but said that he is now so devoted to his wife that he finds sex with men “repulsive.”

In a 2008 interview with Herald’s Good Weekend, he said that as a Christian teen, his homosexuality was “driven inward, but it was always just under the surface.”

“When I was 26 I discovered homosexual pornography,” he said in the article. “I got married when I was 29 for all the wrong reasons. I wanted to keep up appearances as a happily married minister but it was a very sad and dysfunctional marriage.”

But it all changed for him in 1990 when he heard a speech by a Christian psychologist.

“That began a three-year journey of meeting fortnightly with another pastor and confessing my sins,” he said. “He prayed for the pain in my heart and asked that the Holy Spirit bring healing. Slowly but surely I was transformed.”

After pleading not guilty to charges, Brookman said that he never actually believed in conversion therapy and that rumors that he did were a “media beat up,” according to the Australian.

Living Waters, though, was clearly focused on conversion therapy. Prayer is the first step to turning straight, according to Living Waters, followed by pretending to be straight.

“The only way a person is going to really come out of homosexuality or same gender attraction, is for them to find very positive, strong, supportive heterosexual relationships that they can walk in [for] a long time,” said a speaker associated with the program, Ricky Chelette.

Chelette claimed that being sexually abused by his grandfather as a child turned him gay and that, while he still “struggle[s] with same-sex attraction,” he’s straight because “I still really love Jesus and my wife more that I love what momentary pleasure I might get by sinning.”

Another speaker in the profile said that lesbianism is caused by being fed formula as a baby.

In 2012, Brookman testified before the Australian Senate in opposition to marriage equality as a “former homosexual,” where he decried the “narcissism of male homosexuality” which “diminishes the value of femininity.”

He discussed how he became straight, married his wife, and had three kids with her, and was now converting other gay men.

“In the last six months I have celebrated with two ex-gay men, who have married beautiful wives, and with another two couples who have given birth to babies who would never have been born had the man not converted from homosexuality,” he told the Australian Senate.

A spokesperson for the Uniting Church issued a statement that said, “Responsibility for the protection of children and vulnerable people very seriously, and has removed Mr. Brookman from all forms of ministry.”

Man barged into class to give out anti-gay pamphlets. University says it’s OK because he’s married.