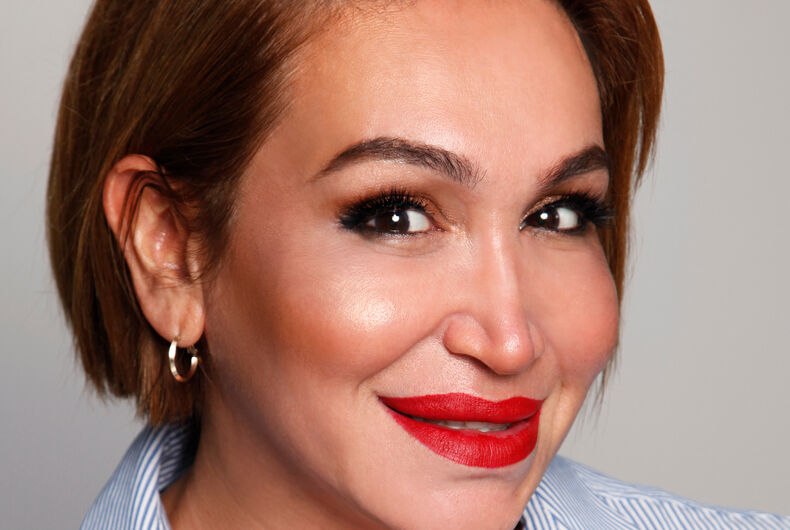 In 1999, Cecilia Gentili moved from Argentina to the United States in search of a better, safer life as an out transgender woman.

For ten years, she lived undocumented, engaged in sex work to make a living, and also battled a severe drug addiction. All of this caused her to be targeted by police, which led to her incarceration and ultimate placement in immigration detention.

Related: John Waters talks about growing up “different” & why you should never give up on people

Today, Gentili is a renowned transgender activist whose work has been vital to the queer and trans movement. For the past decade, she has helped shape policy, obtain government funding for trans-led organizations, and increase transgender New Yorkers’ access to healthcare.

Now the owner of her own company, Gentili continues to speak out publicly to both share her own story and advocate for others. Recently, she served as one of the lead plaintiffs in a case against the Trump administration, aided by the Human Rights Campaign, for its attempt to roll back trans protections in the Affordable Care Act—a case she helped win.

Gentili told LGBTQ Nation that her career in activism all began with an internship.

Released from immigration detention with an ankle bracelet, she was able to seek access to long-term treatment for her addiction. While she focused on getting clean and gaining asylum, her addiction counselor connected her to the New York City LGBT Community Center.

Gentili didn’t feel she had relevant skills, but the staff at the Center assured her that an internship is designed for learning. She accepted, and it changed her life.

“There’s nothing wrong with being a sex worker,” she said, “but [that internship] was a realization that I can do something else, and as a trans woman for me, that was new. I grew up starting my transition at the end of the 80s. There was nothing else to do for a trans woman other than sex work. It was my only answer.”

Around the same time her internship ended, Gentili finished addiction treatment and was granted asylum. Now, she could apply to jobs that paid.

For four years, she worked for New York City’s Apicha Community Health Center, managing a trans health clinic that she grew from four patients to over 500. She then became the Managing Director of Policy at GMHC, the world’s first organization dedicated to HIV/AIDS prevention.

While there, she fought hard for the passage of GENDA, the New York Gender Expression and Nondiscrimination Act, which bans discrimination based on gender expression and identity and became law in 2019. Gentili also created the TGNC Equity Coalition, which fights for equitable policies and also won direct funding from the city for trans-led organizations.

“Being able to create a specific pot of money that comes from the city to support trans-led organizations, and organizations that work with trans people will always be a highlight of my career,” she said.

In 2019, she launched Trans Equity Consulting, for which she and her all-transgender staff advise companies, nonprofits, and governments on equitable transgender inclusion.

“Most of the gender equity work that is done in nonprofits and for-profits lack the trans lens,” she said. “When we talk about gender equity, we usually talk about cis women and how to take care of cis women better. I think gender equity should have a much more broad aspect to it that includes nonbinary people.”

Help us spread the word! 📣 Trans Equity is working with @sageusa to improve services for trans and non-binary older adults! pic.twitter.com/jKeDSCh2BD

She is especially proud, she said, of the team she has built.

“I am proud to be able to create a paycheck for five people plus me who are trans and who have had a history of being mistrusted or misplaced or misunderstood in the workplace, who are brilliant.”

When Gentili took on each of her new roles, she admits she barely knew what she was doing. She had no idea how to manage a health clinic, she said, and when she started at GMH, she knew little about policy.

“I guess I’m a little bit ambitious,” she said. “They needed my services, I got in there. I also am very good at pretending.”

This “fake it ‘til you make it” attitude has taken her far, and she stressed that there is absolutely nothing wrong with learning on the job.

With all of this experience under her belt, Gentili maintains that one of the most important ways to fight transphobia is visibility, and, as she put it, a need to continue to “integrate trans people into the public narrative.”

As anti-trans legislation continues to threaten the rights of transgender people in at least twenty states, she said telling more trans stories is vital.

🚨VICTORY! THE #WALKINGWHILETRANS BAN HAS BEEN REPEALED🚨

Today, we celebrate this success & honor all the transcestors who were a part of this fight. ¡Sí se pudo! pic.twitter.com/MaVuS1YwDG