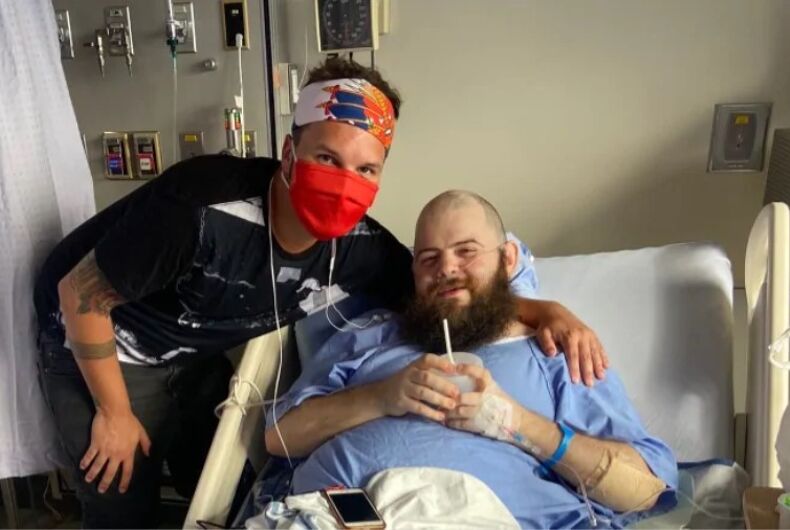 A man whose leg was broken when he confronted an anti-LGBTQ street preacher is suing his city because they allowed the preacher to preach hate in the first place.

The city “could have enforced the laws against disturbing the peace,” said Jim Hanson, the victim’s attorney. “This man was a nuisance.”

Related: Gay man beaten by mob who recognized him from grocery shopping with his boyfriend

Justin Morissette of Vancouver, Canada was in the city’s LGBTQ neighborhood of West End last summer when he saw “anti-gay evangelical bullies” with megaphones and sound equipment, one of whom was later identified as Dorre Strother of Christ’s Forgiveness Ministries. Morissette said he went to ask them to turn down their speakers and that they attacked him.

Morissette, who is locally known because he’s a host on the radio show Sportsnet 650, tweeted about the encounter, where he said one of the street preachers “purposefully broke my leg.”

“My leg is super fucked up, and that sucks,” he wrote. “But the violent man who did this to me would have done it, or possibly much worse to someone else down the line had he not been arrested tonight.”

According to his attorney, Morissette got two broken leg bones and a dislocated knee from the confrontation. Love was later arrested and is currently facing aggravated assault charges in connection to the attack.

But Morissette believes that the police should have done more to stop Strother before the attack.

“First and foremost he wants to set a precedent that this type of behavior is anti-social behavior, it’s hate speech and it shouldn’t be tolerated,” said Hanson. Morissette is suing Strother, Christ’s Forgiveness Ministries, the police, and the city itself as defendants.

“The city has a duty to protect this community and other communities from this type of directed hate speech and antagonism.”

At the time of the incident, police were able to confirm that there was an incident with street preachers who were “preaching about religion and anti-gay chants.”

“The individual is suspected to have been thrown to the ground, where they unfortunately broke their leg,” a police spokesperson said in a statement.

On Twitter, people posted about how the street preachers spread their hate in different neighborhoods.

Strother was warned by police that he could be arrested for his hate speech and was arrested once in July 2020, a month before the alleged attack on Morissette.

Morissette claims Strother told police that he would go right back to preaching hate in the street.

“It’s not lawful to stand on the corner and spew hate speech toward the LGBTQ community or any other community,” Hanson said.

The city is not commenting on the pending litigation and neither is Christ’s Forgiveness Ministries. But in a YouTube video, Strother claimed that he was the one who was attacked.

“I was assaulted,” he said. “A gentleman took my mic out of my hands and tried to get away with it.”

Morissette admitted to taking the mic, according to the CBC, but said that he did not attack Strother.

Cecilia Gentili has been instrumental in the trans rights movement. This is her story.