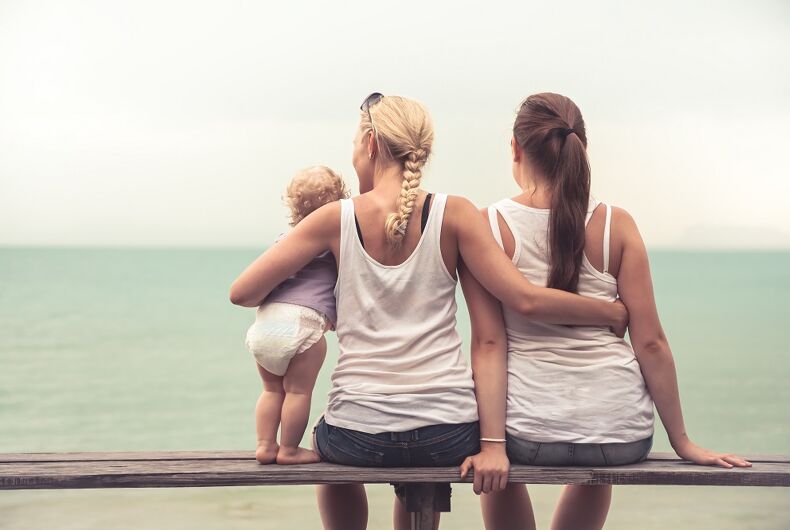 A lesbian couple is suing after three countries denied their baby a passport because she has two mothers. Both of the mothers’ countries and the country the “Baby S” was born in are all refusing to give her a passport.

The mothers are now taking their case Europe’s Court of Justice in Luxembourg, worried that the combination of anti-LGBTQ laws and varying citizenship rules could ruin their baby’s life. If Baby S remains stateless, she could have difficulty enrolling in school, getting a job, or accessing health care.

Related: The Trump administration is denying citizenship to the kids of gay parents if they’re born abroad

Baby S was born in Spain and both of her mothers, who are married to each other, are on her birth certificate. But Spain doesn’t have birthright citizenship and neither of her mothers are Spanish citizens, so Spain won’t grant her citizenship.

One of her mothers is from Gibraltar, which is a British Overseas Territory. But the U.K. doesn’t recognize Baby S because her British mother – who is on her birth certificate – acquired her citizenship by descent and therefore can’t pass her citizenship on to her children if they’re not born in the U.K.

The other mother is from Bulgaria, and the mothers applied for a Bulgarian birth certificate for their daughter so that they could eventually get her a passport. But Bulgaria also refused because the baby has two mothers on her birth certificate, citing their constitution which defines marriage as between one man and one woman.

“It’s caused us a lot of upset,” Baby S’s Bulgarian mother, whose name has not been made public, told Reuters. “This discrimination feels very personal and has shocked us.”

She said that their extended family hasn’t even met the baby since her birth in December 2019 yet because she can’t obtain a passport to travel.

The Bulgarian mother is suing Bulgaria in the E.U. court so that her child will not grow up stateless. Bulgaria and Spain are E.U. member states, but the U.K. is not.

“This ruling will be important for many people,” said the mother’s lawyer Denitsa Lyubenova. “There are a lot of same-sex couples in Europe in the same position, whose children are at risk of statelessness because E.U. member states in central and eastern Europe do not recognize their family status.”

The court in Luxembourg is hearing another, similar case from two mothers who are from Poland and Ireland and who had a child in Spain.