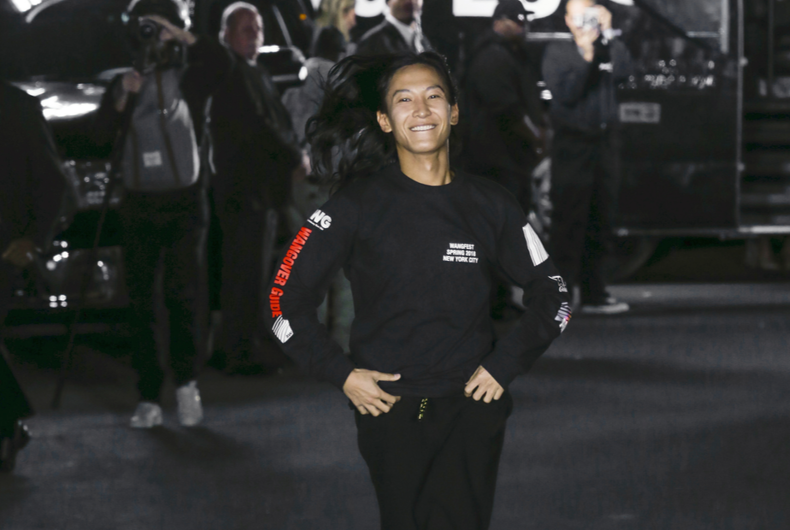 Famed out fashion designer Alexander Wang is facing a wave of drug, rape, and assault accusations from several people in the fashion industry, going back as far as 2014. It started with model Owen Mooney, who shared his accusation on TikTok.

Since, more and more accusers stepped forward against Wang, with social media accounts dedicated to fashion industry research compiling them together over the holiday season.

Related: Kevin Spacey releases a strange Christmas video once again for those “who might be suffering”

In December, Mooney posted that while trying to maneuver the crowd at a party, an individual had began groping him, “fully up my leg, in my crotch.” He turned to see it was “really famous fashion designer,” who he did not name initially.

Responding to a follower’s question, Mooney shared the story of how a celebrity “was groping my dick in the club” in 2017.

“I was in a club in New York City, and … I was by myself at one point and this guy next to me obviously took advantage of the fact that no one could fucking move,” he recalled.

Mooney continues, “and he just started touching me up, fully up my leg, in my crotch, it made me freeze completely because I was in so much shock. And then I looked to my left to see who it was and it was this really famous fashion designer and I just couldn’t believe that he was doing that to me, it made me go into even more shock.

“It was really fucked up, and I just had to slowly move myself away.”

It was only later that Mooney shared that the designer in question was Alexander Wang, the founder of his self-named million-dollar fashion label, and a once-creative director of the luxury brand Balenciaga.

“I thought in the previous video, the better thing to do was just to not mention any names, but… turns out, Alexander Wang is a massive sexual predator, and there’s been a load of people he’s done this to. So, in that case, he needs to be exposed,” Mooney said in reaction to other users guessing and naming Wang as the likely perpetrator. Later, Mooney would add that Wang tried to hug and lean on him after trying to grope him.

“Alexander Wang is a sexual predator, pass it on,” Mooney captioned the TikTok post.

Reply to @hannah_mantanna yep, Alexander Wang is a sexual predator, pass it on #fyp #foryoupage

Trans model Gia Garison then came forward, accusing Wang of attempting to grope and undress her in 2017. “He tried to pull my panties down and expose my genitals in the VIP area… he was chilling with his posse and then reached for my bikini bottoms I was wearing and tried to tug them downwards.

These were not the first accusations made against Wang, who turned 37 on December 27th. As far back as 2019, Rapper Azealia Banks, among others, publicly shared stories they had learned of accusing Wang of harassing, raping, and sexually assaulting several people, specifically trans people and models.

Ryan Korban, an interior designer, was accused of being Wang’s “greasy sidekick” in at least one of the alleged acts.

Recent accusations to come to light also allege that Wang has drugged people, as he would give unknowing people “Molly water,” or liquid spiked with MDMA, a common form of ecstasy.

Accounts were found to recall events happening as far back as 2014, when Wang was still at Balenciaga and also collaborating with H&M. In 2015, Wang departed Balenciaga by “mutual consent” as opposed to renewing his contract, a press release read at the time.

From there, several in the modeling and fashion world or at organizations began distancing themselves from the famed fashion star. “We at the Model Alliance stand in solidarity with those who have shared accusations of sexual abuse by Alexander Wang,” the fashion advocacy organization wrote in an Instagram post.

Finally, Wang began issuing responses through statements on New Year’s Eve. Besides denying the accusations as “baseless and grotesquely false,” he derided the social media accounts relaying the mostly-anonymous claims.

“Seeing these lies about me being perpetuated as truths has been infuriating,” his statement through a representative read. “I have never engaged in the atrocious behavior described and would never conduct myself in the manner that’s been alleged. I intend to get to the bottom of this and hold accountable whoever is responsible for originating these claims and viciously spreading them online.”

In further comments, representatives for Wang said Mooney’s accusations of groping were incorrect. “Mooney is mistaken about who allegedly groped him,” they contend.

Mooney stands by his accusations, speaking further about the experiences. “It was not a case of him accidentally touching me because we were next to each other,” he asserted in emails with TODAY.com.

The NYPD declined to tell the New York Daily News whether or not they were prepared to start an investigation, or if any complaints had been filed.

“The NYPD takes sexual assault and rape cases extremely seriously, and urges anyone who has been a victim to file a police report so we can perform a comprehensive investigation, and offer support and services to survivors,” a department spokeswoman said.