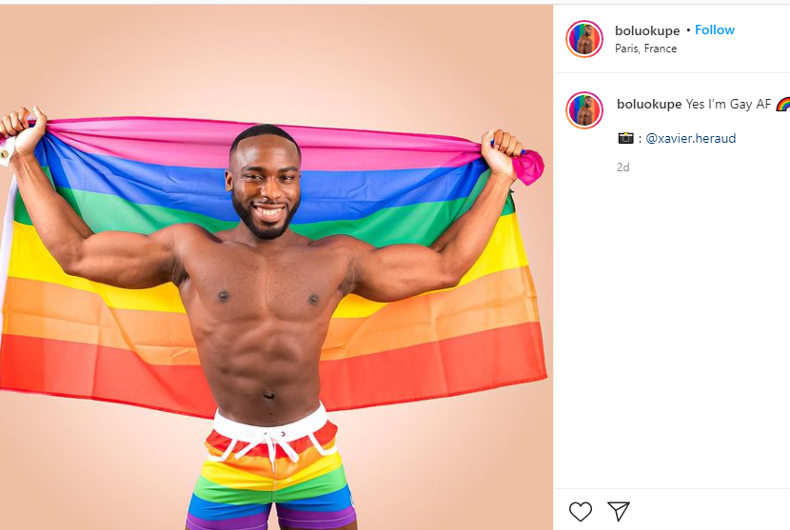 Bolu Okupe is the son of Dr. Doyin Okupe, a physician and politician in Nigeria, where LGBTQ rights are severely limited and same-sex relationships are outlawed.

Bolu, currently in Paris, revealed on his Instagram that he is “Gay AF,” posing for photos in Pride-designed shorts while holding the Pride flag.

Related: One of the most anti-gay countries is about to host a conference on LGBTQ rights

Bolu has been out for at least a year, talking about his identity and participation in the LGBTQ community in several YouTube videos.

However, the sudden and open revelation on social media has caused a frenzy, especially in his home country.

Bolu faced several homophobic comments saying he would be “dead” if he came to other parts of Africa and others calling him “against our God.”

“I hope one day you will educate yourself. If not, I don’t care; you will die ignorant and on the wrong side of history,” Bolu said in one reply before turning off comments.

Bolu has graduated from the University of Manchester, obtained a master’s degree from NEOMA Business School in Paris, is a proud LGBTQ activist, and has also walked in ballroom competitions. But to his father, Bolu is just going through a “saga” that is a “major spiritual challenge.”

“I have been aware of this his new orientation for a while now,” Doyin posted on his social media in response. “He knows that as a Christian and a witness for Christ (an evangelist) I am vehemently opposed to homosexuality as it runs contrary to the avowed precepts of my Christian faith.”

Doyin notes that he gave Bolu his name because “he was born at the time I gave my life to Christ.”

“For me, I look beyond the surface or the physical,” Doyin said. “Here I see a major spiritual challenge ahead but I know as my God liveth, this whole saga will end up in Praise to the Almighty Jehova who I serve day and night.”

My attention has been drawn to a publication of my 27yr old son, Bolu okupe, in which he declared publicly that he is Gay.
I gave him that name MOBA OLUWA RIN, ( I WALKED WITH GOD) because he was born at the time I gave my life to Christ. pic.twitter.com/39RXFueGVB

I have been aware of this his new orientation for a while now.
He knows that as a Christian and a witness for Christ ( an evangelist) I am vehemently opposed to homosexuality as it runs contrary to the avowed precepts of my Christian faith.

For me I look beyond the surface or the physical. Here I see a major spiritual challenge ahead but I know as my God liveth, this whole saga will end up in Praise to the Almighty Jehova who i serve day and night.

Nigeria is considered one of the most dangerous countries in the world for LGBTQ people.

Currently in Nigeria, non-heterosexual people face punishment up to 14 years imprisonment from the country’s militant-like law enforcement, and the death penalty in states or territories that recognize Sharia law in the majority-Muslim country.

Laws criminalizing LGBTQ people have been in place since 1990, and the law that banned same-sex marriage was passed in 2013 and signed in 2014. The 2014 law also legalized whipping and imprisonment as a sentence for women engaged in same-sex marriages, and the death penalty for men. Even mentioning LGBTQ rights or communities can result in punishment.

#EndSARS, a massive campaign calling for the abolishment of the Special Anti-Robbery Squad (SARS) in the Nigerian police in addition to ending police brutality, was led by many LGBTQ activists who also took the opportunity to highlight Nigerian law enforcement’s targeting of the LGBTQ community, especially queer men.

Doyin was a media and public relations aide to two Nigerian presidents, including former president Goodluck Jonathan, who signed the 2014 anti-LGBTQ bill into law. He has previously been accused and tried for embezzlement, and a prominent Nigerian actress suggested that Bolu is gay because God is “blessing the looters with embarrassment.”

Bolu also wrote on Twitter that it is “nothing new” to him for being “hated for being who you are.” Still, he pledged he would “never disrespect any family member publicly.”

Bolu likely isn’t the first son that has disappointed or embarrassed Doyin. His eldest son, Ditan Okupe, petitioned in 2018 to campaign for and work for a candidate from a political party opposite of his father’s.

“We both hv had serious issues in the last 5yrs.This may be his way of getting back at me. I wish him luck,” Doyin tweeted about Ditan at the time.

It’s nothing new to be hated for being who you are. You see… when you are truly able to be your pure & authentic self, you become a big target for those who are insecure.

Your coming out should be a rallying call to the Nigerian Government to Repeal there criminalizing laws for LGBTIQ+.

Thanks for being your authentic self,🌈🌈

Some blogs are spreading a false narrative. I would never disrespect any family member publicly and call them names. My comment was in reference to the people who commented under my post.

Could the COVID-19 vaccine lead to an HIV vaccine?