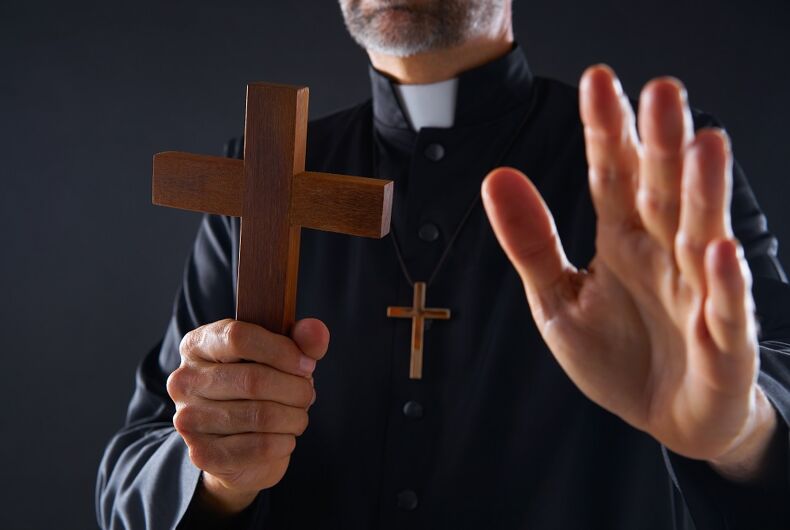 A Catholic church says it is parting ways with a priest who conducted exorcisms aimed at rooting out supposed election fraud in the 2020 presidential elections that he believes is responsible for President Joe Biden’s win. There is no evidence of fraud in that election.

“As exorcists will confirm, the demons are very good with electronic equipment,” said Rev. John Zuhlsdorf just before a January 5 recording of an exorcism, which he conducted in Latin.

Zuhlsdorf is described as “a relentless critic of liberal culture” and has a popular blog, according to the British Catholic publication The Tablet, where he denounces the “Wuhan Devil” and “COVID-1984″ and asks readers to send him money.

“I think it’s amply clear, there’s enough evidence to demonstrate that there was fraud in some places, and people had to commit that fraud, it didn’t happen by itself. It seems to have been well-organized. I am deeply concerned that anyone involved in this has put their soul in terrible mortal peril,” he said in a recording that was put on YouTube. It has since been removed from the video-sharing platform.

“We have to be concerned about the people involved in this who might have lied, or who might have committed fraud, concerning this election. This is not cheating to steal the election to fifth grade class president. This is something on a whole different scale, it’s quantitatively so vastly larger, that it’s qualitatively a different kind of a situation and sin.”

“This isn’t like going over and stealing a newspaper off your neighbor’s porch.”

Exorcism is a ritual for removing evil spirits from a person or a place and requires permission from a bishop to perform.

Back on his blog, Zuhlsdorf claims he was the victim of “cancel culture infecting the Church” and “a Catholic Antifa.”

Bishop Apicella wrote in a letter at the time that, while he belongs “to a non-digital generation” and has “never used or contacted any blog or such thing,” he believes that a priest “who combines arguments of faith and morals with photos of birds, Chinese food, and aircraft seats, as well as boasting about a firearms license, speaks for itself and I do not see what theological or scientific credibility he can have.”

Donald Trump invents “Office of the Former President” for himself