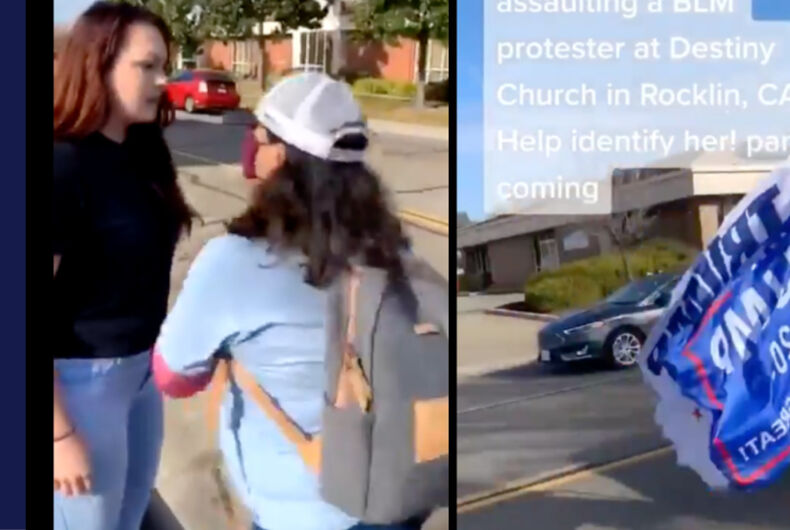 An anti-LGBTQ person confronts a protestor outside of Rocklin Church (left) before a Trump flag-waving truck honks in support.Photo: Screenshots / Composite

People protesting an allegedly racist and homophobic church were shoved and berated, videos published online show. A person accompanying one protestor of the church took video that shows at least two confrontations including one anti-LGBTQ individual.

The incident was apparently recorded on Sunday, January 3, outside of the Destiny Christian Church in Rocklin, California..

Destiny Christian has garnered a reputation for racist, anti-Black Lives Matter, and homophobic actions and beliefs. The church has come under fire recently for holding large gatherings for worship and congregation during the pandemic.

That has spurred sporadic protests by a group called Allies for Black Lives Placer County, including one person standing near the church and holding up a sign that read “LOVE” – with a rainbow in the “O” – accompanied by a Christian scripture.

That prompted a bully to come after them.

In the video, the bully is seen pushing and yelling at the protestor, telling her to “Stay, bitch.”

“Don’t touch me!” the protestor says as the bully tries to grab her sign.

That sets off the bully even more, berating the protestor for standing up for “fag shit” and “lesbian queer shit.” As another voice says, “They’re recording,” and she seems to back off.

She walks off, muttering while departing, “Fucking lesbian.”

Meanwhile, the protestor quotes the Bible. “Don’t hate me,” the protestor, wearing a “Protect Trans Kids” shirt, says as she walks away.

Destiny Christian said in a statement to PinkNews that the maskless individual that came is not a member of their church and they do not know who she is.

“Authorities have been contacted, a report has been filed, they are also hoping to find the person who attacked our protester,” they wrote.

An extended video that has made its way to Tik Tok, with the protestor and the person accompanying them walking away — until they turn around, hearing more confrontation. As they turn back to see the commotion, a Trump flag-bearing pick up truck honks obnoxiously while passing them.

This blew up on tiktok and it’s literally down the street from my house.. Rocklin is so 🤡 pic.twitter.com/XuS4rY8Qhn

As the accompanying person recording the video turns back to the scene, they record from a distance as bully is getting into an argument with another group of people.

One person in the group yells, “Don’t get in my fucking face, and don’t get in my man’s face! What the fuck did you think this is?”

While the church has come under criticism before, more recent protests appear to have been sparked by the holding of a black tie gala on New Year’s Day with over 375 congregants, and reportedly a Ferris wheel. All legal under Placer County and the state of California’s restrictions because the Church was providing a religious service — a wedding for the daughter of the church’s pastor, Greg Fairrington.

Destiny Church are among Christian institutions that belong to the Assemblies of God, a group that has determined anyone who takes part in “same-sex sexual acts or conduct” to be “intrinsically disordered.”

“Homosexual behavior, along with illicit heterosexual behaviour, is immoral and comes under the judgment of God… The Assemblies of God affirms the sexual complementary of man and woman and teaches that any and all same-sex sexual attractions are to be resisted,” their website page on “Homosexuality, Marriage and Sexual Identity” reads.

In a tweet the day after the event took place, Destiny Church put out a tweet condemning the protests. “LGBTQ and [Black Lives Matter] advocates have held two protests near Destiny Church for what they believe to be comments made against their communities. Nothing could be further from the truth,” they claim.

“We reject all forms of racism and hatred,” they write. Less than one paragraph later, they defend their previous comments, adding, “we will not allow culture to re-interpret the timeless truth of the Word of God. We will not be a church that stands by political correctness.”

We will continue in our 30-year long history of loving all people. pic.twitter.com/smu5cDRl2o