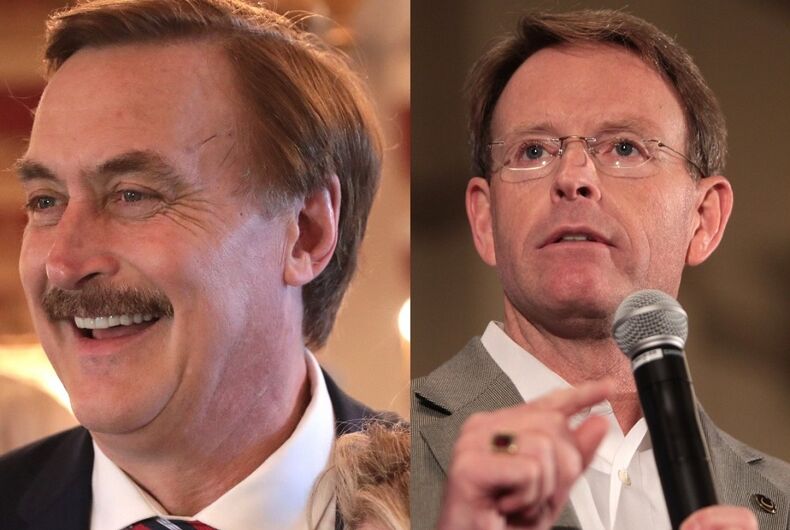 Tony Perkins, the head of the anti-LGBTQ hate group Family Research Council, is urging his group’s followers to buy pillows for Christ.

The far-right evangelical leader is upset that MyPillow CEO Mike Lindell has been permanently banned from Twitter for spreading fake claims of election fraud as retailers nationwide stop carrying the company’s products. Lindell has subsequently claimed that Twitter was secretly running his account after “freezing” him out in a bizarre rant to local news.

Both Perkins and Lindell are rabid supporters of former President Donald Trump, but Lindell, in particular, was a favorite of Trump. Lindell spewed multiple conspiracy theories about COVID, the election, and just about anything else that would catch the former president’s attention.

“The cancel culture would love nothing better than to shut up Christians and drive them from the public square,” Perkins wrote. “That’s a lot harder to do when we refuse to live in fear of anyone but God.”

“It takes a lot of courage to speak the truth when your livelihood is on the line. So when these business leaders are attacked — like Mike and [Goya CEO] Bob Unanue — we need to support them,” he continued. “Maybe you don’t need another pillow or mattress pad — buy one anyway. There are so many spineless and cowardly people out there.”

Lindell, who is being sued by Dominion Voting Systems for falsely accusing the company of “stealing millions of votes,” has a bizarre explanation for the social media site’s decision to yank his account for “repeated violations” of the site’s policies.

“They froze me out. Everyone thought it was still up, but I couldn’t like or do anything,” Lindell told Minnesota’s Star Tribune. “They really had already banned me without the public knowing.”

“I just couldn’t do anything and they were running my Twitter like they were me,” he continued.

“My friends are going you’re not tweeting very much and when you do — I said I’m not doing that so I try to take it down and I got something from Germany saying these are Twitter rules and you cannot do this, so they ran my Twitter for 14 or 15 days.”