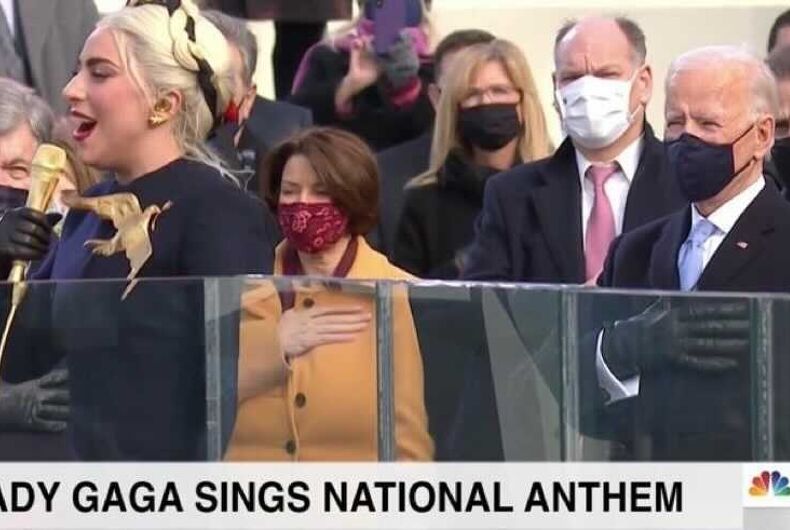 Lady Gaga singing the National Anthem at the InaugurationPhoto: Screenshot

Biden and Harris will take office amidst a pandemic of coronavirus infections that has already taken over 400,000 lives, their nominated Cabinet of officials still awaiting confirmation, and the second impeachment proceedings against Biden’s predecessor, Donald Trump, who did not attend today’s ceremonies.

Related: Trump’s lesbian niece Mary says this is “the worst day of his life”

They will also take office just two weeks after a white nationalism-fueled mob broke in and stormed the United States Capitol building, putting the lives of then Vice President Mike Pence and the 535 members of Congress in danger, among others. Five people perished after hours of rioting.

Eugene Goodman, an officer who faced down rioters in protection of Pence when he was directly in their reach, has become the acting Deputy Sergeant at Arms of the United States Senate. Goodman escorted Harris to the Capitol and Inauguration stage.

Still, Biden and Harris will take the helm of the world’s oldest democracy until January 20, 2025. They pledge to lead the most pro-equality administration in history, and hope to have staffed the most diverse leadership ever to run the United States. That includes supporting and cementing the civil rights of LGBTQ people.

Harris, standing next to her husband and the Second Gentleman of the United States Douglas Emhoff, was inaugurated by Supreme Court justice Sonia Sotomayor. She becomes the first woman, African-American, and Asian-American Vice President.

Congratulations to Madam VP @KamalaHarris. You have the pride & hope of millions, may God give you strength & clear vision as you rise to your new level of service. As one that worked w/ Shirley Chisholm in my teen years, I know she’s smiling upon you today. #InaugurationDay pic.twitter.com/9tHtniyDs3

On this historic day, I’m wearing Congresswoman Shirley Chisholm’s pearls, given to me by her goddaughter, who said that her godmother “would not want it any other way.”

Because of Shirley Chisholm, I am.

Because of Shirley Chisholm, Vice President Harris is. pic.twitter.com/rgQKw2Y8Qb

She was sworn in with two Bibles held by her husband — one belonging to family friend Regina Shelton, and another belonging to former Supreme Court Associate Justice Thurgood Marshall.

After the colors were presented by the Armed Forces Color Guard, the national anthem was sung by bisexual award-winning entertainer Stefani Germanotta, known as Lady Gaga.

Lady Gaga with the social-distancing skirt!

After her performance of the National Anthem, Lady Gaga put a mask on and came back to greet the Obamas #InaugurationDay pic.twitter.com/4jFkvNlHh5

Anyone who grew up in the 2000s knows these are childhood icons right here. #InaugurationDay pic.twitter.com/XA7QOEGVUV

Jennifer Lopez then performed “This Land is Your Land.”

Just incase you’re still wondering what JLO screamed in Spanish: “One nation, under God, with liberty & justice for all”. #InaugurationDay pic.twitter.com/6IBYtmxCNP

Finally, Supreme Court Chief Justice John Roberts swore in Biden, who held his hand on a Biden family Bible held by his wife and the First Lady of the United States Dr. Jill Biden.

Joe Biden is sworn in as the 46th president of the United States https://t.co/ljL2LMOQEm pic.twitter.com/JddDa2wfYH

We did it. President Joe Biden–a man of decency, integrity, empathy, and compassion. A man who will indeed protect and defend the Constitution. Finally.

Following the swearing in, Biden delivered his inaugural address for about 25 minutes.

"I pledge this to you: I will be a president for all Americans." – @POTUS #InaugurationDay pic.twitter.com/iTqcfC7y2D

There are brighter days ahead for the American people

I look forward to strengthening the friendship between our island & US

"Dreams of justice for all will be deferred no longer." – President Joe Biden pic.twitter.com/8myVg9q6KK

Amanda Gorman’s message serves as an inspiration to us all. #InaugurationDay pic.twitter.com/7zkyDoFHaQ

This gives me hope. #AmandaGorman

Thank you @GarthBrooks for joining us on #InaugurationDay for this historic moment of unity and hope. pic.twitter.com/pfcb3lkKXr

You know that the @BidenInaugural has it’s act together when someone remembered to invite Dan Quayle. pic.twitter.com/YSAjURoeyk

The moment you've all been waiting for: Dan Quayle pic.twitter.com/c90UZWtB4e

"You look so wonderful," Gaga says to Michelle Obama.

To conclude the ceremonies, Vice President Harris presided over the ceremonial departure of Pence.

"Never show your face in this town again" #InaugurationDay pic.twitter.com/Qj0ymrPvX0

To everybody who voted against corruption, cruelty, and incompetence and FOR kindness, dignity, and democracy.

I am grateful to–and for–every single one of you. This is for you.

Congratulations to my friend, President @JoeBiden! This is your time. pic.twitter.com/LXzxGnBAfz

A historic day. Congratulations to our new President @JoeBiden and our new Vice President @KamalaHarris.

Now we must begin creating justice, healing our planet, and improving the material conditions for all people.

The work is on all of us to organize and build a better future.

Now the real work begins, folks. Follow along at @POTUS as we build back better. pic.twitter.com/fHViqSqwp2

Biden promises to be a more progressive president than anyone expected