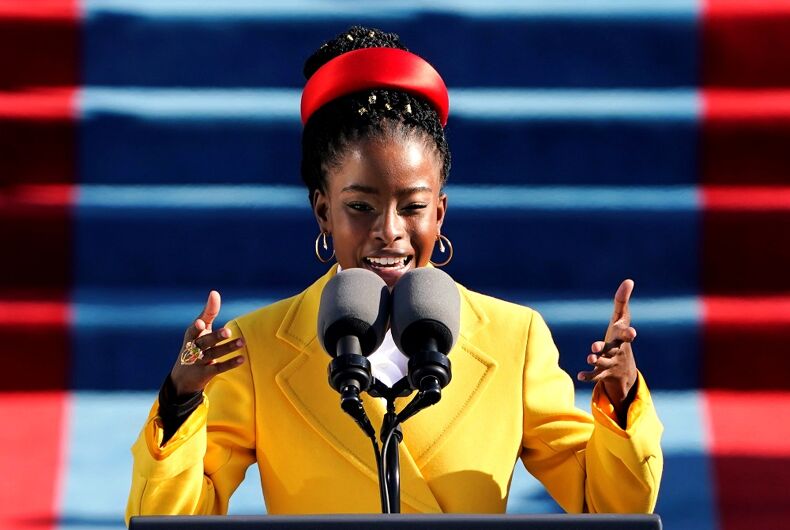 Amanda Gorman mesmerized a nation with her inauguration poem “The Hill We Climb.” The beauty of her presence and the power of her words captured a country battle-scarred and looking for a lifeline.

“After four years in a dark wilderness, she was like a ray of sunshine and a burst of hope which had been in too short a supply for far too long,” Cambridge Councilwoman E. Denise Simmons said.

The 22-year-old Harvard grad and spoken-word poet honed her skills around the Boston poetry scene. Gorman follows the august footsteps of presidential poets Robert Frost and Maya Angelou. She is one of the new voices continuing the African American women’s literary tradition – blending writing with activism. She adds to a long and storied tradition of poets Angelo, Audre Lorde, Nikki Giovanni, Sonia Sanchez, Ntozake Shange, and Gwendolyn Brooks, to name a few.

The words and wisdom of these sister-poets continue to anchor so many Black women through hardship, uncertainty, and loss. Their stories empower and affirm us and are guides for self-care and survival. These women have informed Gorman’s poems and whose shoulders she stands on.

And Gorman knows this. “I repeat a mantra to myself: ‘I am the daughter of Black writers, we are descended from freedom fighters who broke their chains and changed the world. They call me,'” Gorman proudly shared in an interview with PopSugar.

Gorman was tasked to write on the inauguration’s theme, “America United.” It was a tall request to fulfill given the civil unrest of last summer and the recent Capitol siege. However, Gorman being an extraordinarily confident and gifted writer, delivered, crafting a poem, part personal, political, and prophetic. The poem spoke honestly in the moment while suggesting a future America can become.

“Now more than ever, the United States needs an inaugural poem,” Gorman told the New York Times. “Poetry is typically the touchstone that we go back to when we have to remind ourselves of the history that we stand on, and the future that we stand for.”

As the nation’s first youth poet laureate and the nation’s youngest inaugural poet, Gorman has got America talking about her, especially Black women.

“This young woman framed the concept of a nation that is not broken, merely unfinished, yet accurately reflecting the mood that if we all work to move beyond the bitterness, the vitriol, and the inflammatory language, we can strive to make our tomorrows better than our yesterday,” Simmons said.

Growing up in the era of the Obama presidency and now with Vice President Kamala Harris becoming the first woman and person of color as vice president, Gorman espouses an optimism about the future that I’d expect to hear from Generation Z.

“Where a skinny Black girl descended from slaves and raised by a single mother can dream of becoming president, only to find herself reciting for one,” Gorman said in her inaugural poem.

Gorman sees barriers broken for her and other Black girls’ future. However, this country’s troubling history continues to have stubborn, unyielding, and systematic ways of tainting a possible future. The backbones of Black women carrying this nation leave some resolved that America is not ready to change.

Black people and other people of color are still battling voter suppression, police brutality, mass incarceration, health disparities, COVID, and policies that don’t help them. Many sisters hope this new and aspirational Biden-Harris administration will be more of substance than the symbolism of Black and brown representation. Perhaps then Black women can actualize Gorman’s vision.

“I see the world quite differently than this beautiful and talented young woman. I’m not sure that she is talking to me. I am tired of being the resilient one. The one that has to carry the Republic on our backs as we ‘step out of the shade of flame and unafraid.'”

“I am afraid and tired. I am not hopeful. I don’t see the light as something that is for my people or me– but I’m glad that the young sister sees the light and believes it is for her and others. Yes, the light has always been there, but it isn’t necessarily for black folks except to occasionally shine on our suffering, deaths, murders, inequities, etc.,” Armenta Hinton of Central Pennsylvania shared with me.

Gorman and Hinton express the bookends of varying views I’ve heard from Black women across generations. I love Gorman’s poem. It envisions a future America many of us hope for – a multicultural democracy and a participatory government.

However, I am cautious and caught between Gorman’s youthful optimism and Hinton’s lived-reality.

A lesbian couple wanted to have a baby. They got an all-girl set of quintuplets.

Joe Biden needs to rebuild the wall between religion & government