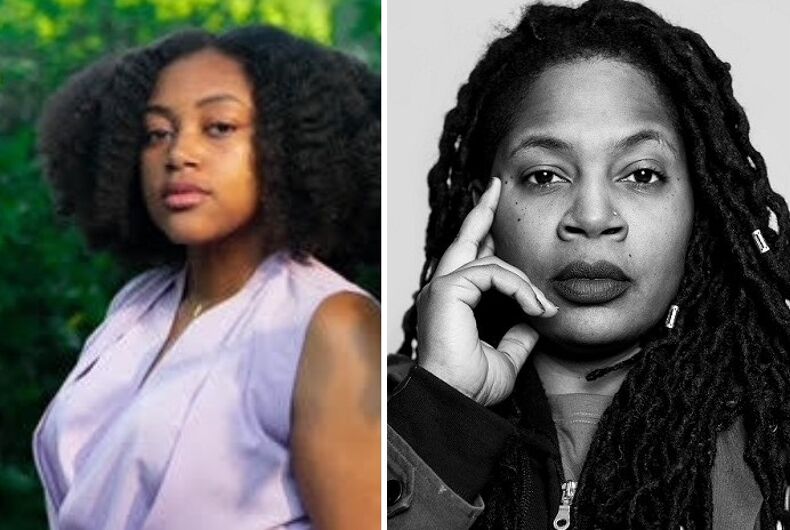 For the past five years, Mary Hooks has held the role of Co-Director of Southerners on New Ground (SONG), an Atlanta-based organization fighting for “LGBTQ liberation” throughout the South.

Hooks has made a name for herself for her deep and impactful organizing work. Among other work, she helped found the Atlanta chapter of Black Lives Matter and also created Black Mama’s Bailout, an initiative to bail Black mothers and caregivers out of jail.

In January, Hooks’s tenure at SONG will come to an end and she will take some time off from organizing. She is not leaving, however, without one more fight.

Through SONG’s new political and advocacy arm, SONG Power, Hooks is helping lead the organization’s efforts to get out the vote for Georgia’s Senate runoff elections on January 5th.

SONG Power, whose work is considered key to flipping Georgia blue in the 2020 presidential election, is working to again make history by helping to flip the Senate blue as well.

Comprised of 11,000 members and with chapters in all thirteen Southern States, SONG has been a staple of Southern organizing for decades. As such, Hooks and her team are relying on the deep connections the organization has built in Georgia.

“We’ve always believed in relational organizing,” Hooks told LGBTQ Nation. “We’re trying to put boots on the ground and at the same time be able to make sure our folks know about long-term issues we’re organizing around.”

In addition to phone banking, text banking, and fundraising, the SONG Power team has set a goal to knock on 100,000 doors by January 5th.

“We have to be highly impactful in a short amount of time,” said Jill Cartwright, SONG Power’s Georgia Statewide Campaign Organizer. “We’re trying to do something that a lot of people try to do in a year and half’s worth of campaigning.”

Despite the challenge, both Hooks and Cartwright feel optimistic.

“I think people see the importance of it and what this means,” Hooks said, “and I think people are willing to take the risk to do it again, go back out to the polls to see if we can flip the Senate. Because we know so much is at stake.”

Hooks said she has been invigorated by the many groups she has seen engaging in work to get out the vote, including many that don’t traditionally do electoral work.

“The streets are painted with information for people to make sure they go out and vote,” she said. “So I feel like there’s something in the air.”

Join us this Sunday, December 6th from 2-5pm for our collaborative DIY Knock Your Block canvass with Women's March! Training, support, materials, and a digital crew will all be provided.

Still, Hooks is preparing for a tough battle once the ballots have been cast. In the same way it took a recount to confirm President-elect Joe Biden’s win in Georgia, she anticipates challenges to the results if the Democrats win.

“[In the Presidential election,] they could not believe, they refused to believe, they wanted to deny what the people had said and spoken in terms of Georgia flipping blue… As much as we’re ready, and I feel like people are ready to mobilize and move, [we should remember] the right wing and the conservative sphere are doing everything they can to fight.”

Cartwright said she hopes the consequential nature of this election helps people across the country recognize that the South is not “a throwaway” in the progressive movement.

“It’s actually a crucial cornerstone of that work,” she said. “We see that by the way that essentially the future of this nation is hanging on Georgia right now.”

Cartwright does not see the state as unique. She instead believes it to be the first blue domino to fall in a transforming South, a South she maintains has long been more progressive than many believe.

“Now it’s more apparent,” she said, “and also there’s more resources to actually make that happen… We want to see this happen in Alabama, Louisiana, North Carolina, other states most people write off as red states, [saying that] they’re backward and never going to deliver the kinds of victories we want to see. But we know that’s not true. We’re showing it’s not true.”

Hooks and Cartwright also emphasized that no matter the outcome on January 5th, they hope people stay energized to keep fighting for change.

“My hope is that folks continue to be inspired by all the changes and transformation that is happening in Georgia,” said Hooks, “but know that voting is one part of it. The real deal is when we make a long-term commitment to liberation work.”