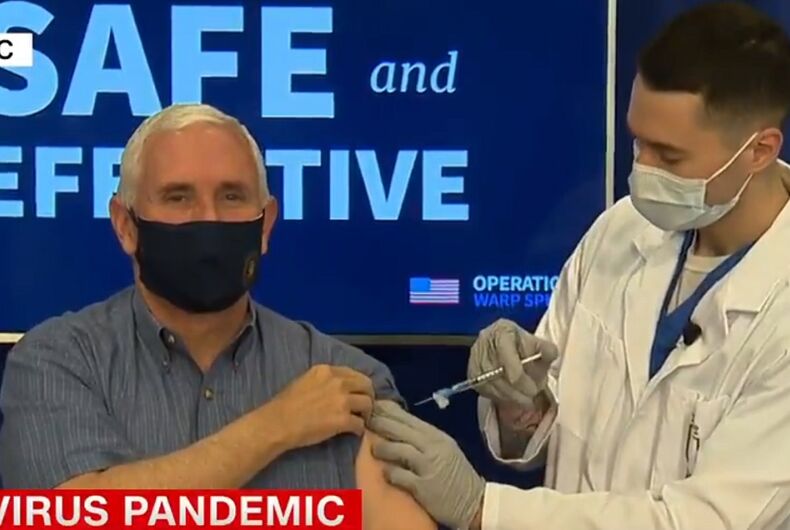 Mike Pence and his wife Karen Pence just received the Pfizer-BioNTech vaccine against COVID-19, and it’s stirring mixed emotions from Americans who are angry about what they believe to be Pence’s incompetent handling of the pandemic and taking away one of a limited supply of doses of the vaccine from frontline health care workers.

Pence hailed the vaccine as a “medical miracle” before being administered with it at a press conference, alongside Surgeon General Jerome Adams and Karen Pence.

“Karen and I wanted to step forward and take this vaccine to assure the American people that while we cut red tape, we cut no corners,” Pence said.

Pence himself famously refused to wear a facemask, even while touring hospitals. His staff later made fun of Kamala Harris for requesting basic safety measures be taken during the vice presidential debate even as the White House was experiencing a coronavirus outbreak.

Even while his own staff was coming down with the virus and he was possibly exposed to the virus, Pence continued with a rigorous campaign schedule and possibly put others at risk, claiming that he’s an “essential worker.”

So his vaccination and his statements led to a lot of mixed emotions for many Americans who have watched him bungle the response to the pandemic, contributing to the deaths of over 300,000 Americans so far and several thousand more deaths each day this month as the pandemic spirals out of control.

It’s a Dem hoax!
It will disappear magically!
China virus!
Only 80,000 will die
Trump gets credit for vaccine
Fake death counts!
Only 200,000 will die
We’re not takin’ no Bill Gates vaccine!
Ignore the death counts
Mike Pence gets the vaccine first

So true. It’s a slap in the face to the families of the 310K people who have died because of Pence’s incompetence and negligence.

#MikePence was one of the first people to get a vaccine for a virus he did absolutely nothing to stop, while enabling a man who did everything to make it worse—causing us to now lose the equivalent of a 9/11 attack every day. @VP has blood on his hands.https://t.co/ELHaPSgzIJ

It’s odd that Mike Pence cast doubt on science for 8 months and now is getting a vaccine on TV.

Mike Pence lied to America about COVID-19 along with the rest of the trump admin. He shouldn't be getting an early dose of the vaccine.

NONE of those liars deserve it. Their lies helped kill people

I don’t want Mike Pence to get a Covid vaccine, I want my parents to get it. My parents didn’t kill 300,000 people.

Is anyone else wondering why @VP Mike Pence and his wife received the covid vaccine?

They are not essential to American security or governance. And as millions Pfizer vaccine doses sit unused in a warehouse, I'd argue that the leader of the coronavirus taskforce has failed.

Others noted that, because anti-vaccine conspiracy theories might make widespread uptake of the vaccine more difficult, it’s good that Pence is getting the vaccine and showing the far-right that it’s safe.

This is good and important. I have pretty much nothing positive to say about Mike Pence, but this act is unequivocally positive. A lot of Americans will needlessly die if the vaccine isn't championed by Republicans and Democrats alike. https://t.co/cYtetn5FcX

On the one hand, I salute @VP for taking the vaccine in public to show support. But on the other hand, he doesn’t deserve to get it as part of an administration that lied to the people and belittled the severity of this pandemic. #vaccine