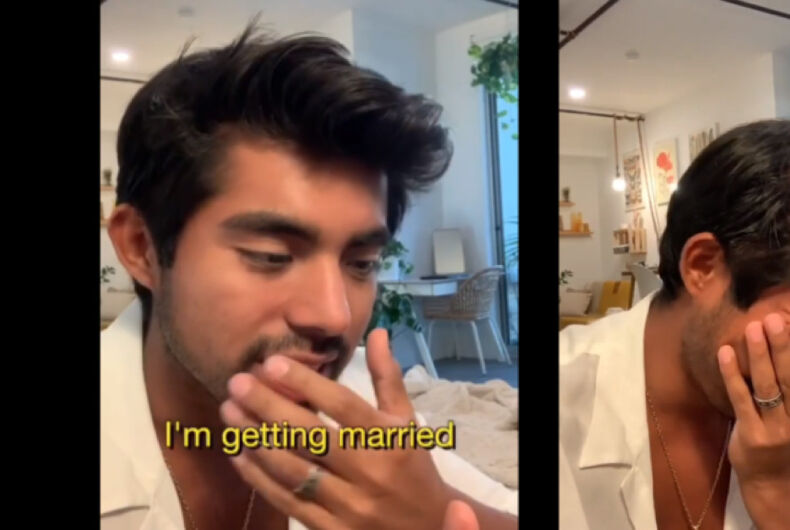 Henry Jimenez talking and crying while on the phone with his mother.Photo: Screenshot

A man has gone viral online after recording his phone conversation with his mother, telling her that he was now engaged to his boyfriend.

21-year-old photographer Henry Jimenez posted over two minutes of the conversation on TikTok, followed by Instagram. “This as I said IS SO HARD for me to share,” he revealed in the caption.

Related: Hero teacher brought to tears after winning a free new car. Her wife nominated her for the honor.

The conversation between Jimenez and his religious mother, in Spanish but captioned in English, began with Jiminez trying to search for the words. “What did I want to tell you…” the captions read.

Then, he finally finds them. He tells her that his boyfriend, Kasey Kerbox, proposed to him, and he said yes.

“I want to invite you,” Jimenez explains, “but I know you don’t approve that I’m marrying my boyfriend.”

From there, the conversation instantly turns sour. You can see even the cautious joy flush out of Jimenez’s face.

“I can’t believe you’re being serious about this,” his mother is captioned as saying. “Do you know that’s a sin in front of the eyes of God? Do you know that?”

Jimenez starts tearing up when his mother tells him, “those who will never get into God’s kingdom are men that sleep with men, and drunks, and adulterers, because the bible says…”

The video then cuts to Jimenez pleading with his mother to understand, saying, “I’m not gonna change, if that’s what you think!”

“You’re so wrong. You can’t see it but you’re so wrong,” she shoots back. “At what point did you meet that guy? That guy has blinded you, he doesn’t want anything to do with God.

Jimenez fully breaks down when his mother tells him, “Every time you talk to me about that, you make me sad. You make me sicker than I already am.”

He then tries to tell her that he’ll talk to her later, but Jimenez’s mother continues on. “The day I die, you are gonna be the one who kills me, because I’m always thinking about all the stuff you’ve done wrong.”

“You do wrong. You sin,” she pushes on as Jimenez stops responding, and concluding, “Think really hard about what you’re doing. Think about it and don’t sin for Satan,” before Jimenez finally hangs up.

“I got a message from a kid telling how much he felt inspired after watching this and told his parents his biggest secret,” he wrote when posting the video to Instagram. “That makes me so happy and makes it all worth it.”

So, he’s continuing to share it, and asked others to do so as well, to “remind people that everything is gonna be okay.”

Jimenez was born in Comalcalco, Mexico, and is based in Mexico City. He has recently shot campaigns for luxury brands Carolina Herrera, Bershka, and Merkabá.

Kerbox surprised-proposed to him on their recent trip through the snow in mountainous, northern Alaska. The video of the proposal itself has over 70,000 likes on Jimenez’s main Instagram alone. He called it the “easiest Yes” in his life.

♬ Therefore I Am – Billie Eilish

Jamie Manson is an out & devoted Catholic. She’s still fighting for the church to change.