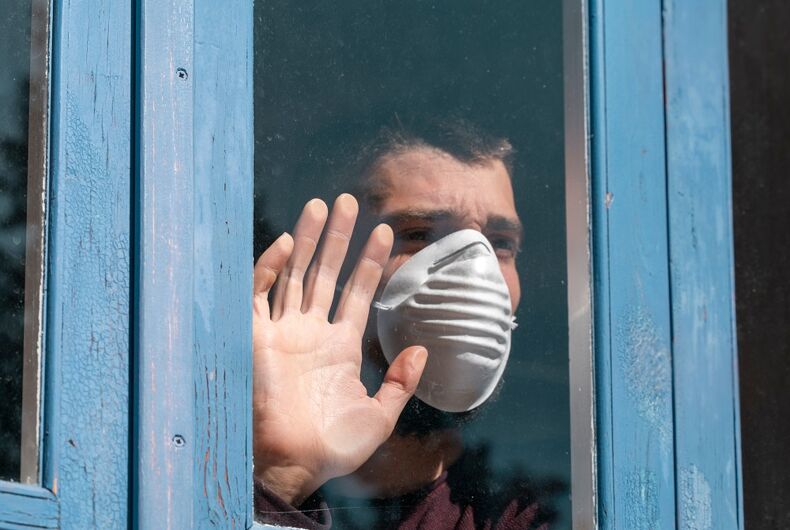 Able leadership demands the transcendence of personal shortcomings.  With Reagan-era levels of apathy and repeated references to Covid as the “China Virus” (invoking the tactics of the ’80s when AIDS was branded a “Gay Disease”), the parallels between Trump’s mismanaging of Covid and Reagan’s mishandling of HIV-AIDS are chilling. Their legacies confirm the grim reality that bigotry, classism and elitism kills. It is clear that Silence=Death, the mantra and defining image used by the ACT UP organization and others to promote visibility for AIDS, still applies.

For many in modern day America, “really bad things” like Covid-19 have always happened elsewhere. But naivety was ripped from me 40 years ago when most of my dear friends contracted a virus that turned vibrant, healthy young men into shell‐shocked, grief stricken, walking skeletons.

Discarded by their country and often disowned by family, our small, historically fractured gay community rose up in unity, strength and newfound courage.  For years, day after day, we cared for our sick, buried our dead, and sacrificed for one another – in large part because Ronald Reagan turned a blind eye on the crisis.  Reagan’s inaction was tied to apathy and a lack of empathy toward the populations most vulnerable to HIV, as was confirmed with painstaking detail by San Francisco Chronicle journalist Randy Shilts in his 1987 book, And the Band Played On: Politics, People and the AIDS Epidemic.

Channeling our grief and rage, we demanded our country’s support through every means possible, from the power of diplomacy and the elegance of the arts to new, in-your-face forms of civil disobedience.  We “Acted Up,” knowing that “Silence=Death,” and we schooled our public officials in what we could achieve when fighting for our lives, together. And we grieved.  And grieved again and again….

For many of us in the LGBTQ community, that loss of innocence stretched and strengthened us individually and collectively. With newfound tools for community building, we developed professional organizations, political clubs, sports teams, and community centers.  We became able organizers and advocates, legal experts and legislators, doctors, business owners and dreamers following our artistic and creative passions, perhaps surprising even ourselves in the process.

Many of us learned how to stand tall for the first time while shedding the dead weight of generationally inherited shame as “sissies, degenerates and queers.”  And having found our voices through the clarity and perspective that only great loss and suffering can provide, we set ourselves free to live out loud with dignity, integrity and purpose, hoping the grief and loss would take its proper size in our hearts over time.  From the pandemic of HIV came unexpected learnings, strengths, and gifts.

Now, a new generation of Americans is experiencing another momentous awakening.  COVID-19, like a tidal wave crossing the globe, hit our shores, toppling the structure of our daily lives.  Like Reagan, Trump not only turned a blind eye on the crisis, he actively withheld vital information that could have saved lives and minimized economic damage.  Through the lens of ego and political survival, and perched from a bully pulpit, Trump mocked those attempting to lead safe and responsible lives, while blaming China and political rivals in order to save face and deflect responsibility.

Trump and Reagan’s choices during their respective pandemics revealed a disregard for those they perceived as less than, creating a hierarchy of who was and was not worthy of resources, support and ultimately, of life itself.   The result of this grotesque lack of humanity is a wake up call to America about the urgency for selecting worthy candidates based on proven experience, character, and core beliefs that include empathy, compassion and an ability to see and govern beyond personal shortcomings.

As experienced by the LGBTQ community in the wake of AIDS, silver linings have and will continue to emerge in America despite and because of the inept leadership through the COVIDpandemic.  Some of those include: increased political activism, a forced reassessment of individual and collective priorities, and an unsurpassed American ingenuity for creating dynamic, virtual systems and solutions that allow for commerce, education, the arts and the fullness of life to march on in compromised yet sustainable ways.

And perhaps the greatest outcome of this dark and challenging time will be the continued wide-scale awakening from American political passivity to the reality of just how precious yet vulnerable our participatory democracy is and what each of us must do to keep it.

David Topel is the author of The Heart of a Leader: The ’72 Biden Senate Campaign: Lessons from a Youth-Driven Upset. He is the founding Board President and Sole Incorporator of The Attic Youth Center, Philadelphia’s LGBTQ Youth Center, now in its 27th year.