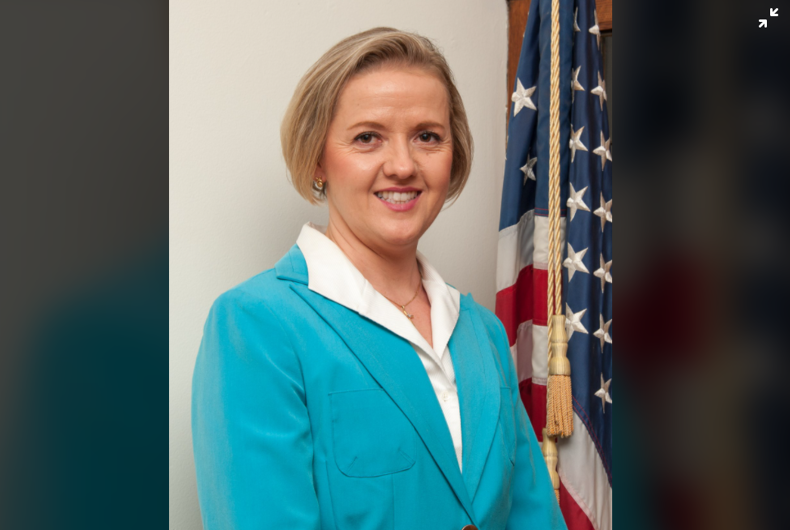 A school board trustee accused of being an anti-LGBTQ bigot has resigned from the Hackensack Public Schools Board after she subjected board members, students, and families to her “bathroom break” during a virtual meeting.

Frances Cogelja made headlines over the last two years for voicing her disdain of LGBTQ people, and opposing the inclusion of LGBTQ history in curriculum starting this year, as required throughout the state of New Jersey by law.

“The Trustees have received a letter of resignation from Mrs. Frances Cogelja, effective November 24, 2020,” the greeting on the Hackensack Public Schools website currently shares with visitors, “…the remaining Trustees must fill the vacancy within 65 days (January 29, 2021).”

On November 23, during a public comments segment of the board’s meeting – broadcast live via Zoom – Cogelja “didn’t realize she’d left her laptop camera on when she took it with her while going to the bathroom,” the Hackensack Daily Voice reports. From there, at least 150 viewers – students among them – were subject to witnessing her use of the facilities.

Bylaws dictated that she couldn’t be removed from the meeting, but Board Vice President Scott James-Vickery condemned her when she returned by telling Cogelja that “you need to go.”

“We’re here trying to get work done while you’re sitting on the toilet,” he said to her. Board members couldn’t unseat her on their own, but regardless, Cogelja’s resignation was received by Board President Lancelot Powell, who she allied with in elections, the next day.

In June 2019, strings of emails she wrote in February of that year to the acting Superintendent of the District were uncovered via public records requests, obtained and shared by candidates that failed to win seats on the board.

“I find it repugnant that someone’s sexual preferences have anything to do with their contributions or achievements in society,” she wrote. “Everywhere I turn, this alternate lifestyle narrative is being shoved done [sic] our children’s throats. Where does it end???”

Cogelja spoke in reference to discussions on the LGBTQ history curriculum for the district’s 5,700-plus students within the Bergen County School District. A law signed by Gov. Phil Murphy in January 2019 made it mandatory for each school board to decide the curriculum and implement it.

“We have a large percentage of kids who cannot read or do math at their grade level, and our governor thinks we should be wasting valuable instruction time on this nonsense,” her rant continued. “I am disgusted and appalled. I fear where we are headed as a nation.”

Cogelja’s comments earned her condemnation from both of the U.S. Senators from New Jersey, Bob Menendez and Cory Booker, and “nearly two dozen community leaders and groups” via open letter by advocate group Garden State Equality. The Bergen County, New Jersey sheriff and executive both called for her resignation.

Opposing group Hackensack Future said in a statement at the time, “there is nothing ‘disgusting’ or ‘shocking’ about celebrating our diverse history and recognizing underrepresented and marginalized groups.” They alleged she was a bigot that “has threatened members of the public” before. They also dedicated a custom domain site, www.flushfran.com, to request donations to their efforts to unseat her.

After, the mother of two told the Daily Voice that she has “no disdain or disgust or any other negative feeling toward people who have a different sexual lifestyle from my own,” but noted that she went out of her way to opt out her own children from the curriculum.

“I believe conversations having to do with sexuality should be had at home between parents and their children,” she said, “…I have every right as a parent to not have my child participate in something that I do not think is suitable as part of a public school curriculum.”

She adamantly pledged that she would “never” resign.

Cogelja was further condemned in June of this year when the board evaluated a “largely symbolic” measure that committed to “dealing with anti-racism in our schools and in our community.” Out of the ten board members, nine voted yes. Cogelja was the only one to abstain, and did so with no explanation for parents or staff in attendance.

She later claimed that this was because of “a conflict due to an ongoing investigation in the district of which I am inadvertently a part of,” but given a second chance she changed positions and voted in support of it a week later.

She was elected to her term on the board in 2018 after campaigning that she “vowed to removed politics from schools.” The group that supported her, Putting Kids First for Hackensack, wrote that Cogelja was a former PTA member at two schools and President at one, who “believes that active, involved parents help children succeed.”

She branded herself as proudly representing “a faith-filled family with conservative views.”

Cogelja told the New York Post that she “will not have a statement” on the incident.

What does ambisextrous mean? These 12 queer terms are in the dictionary now.