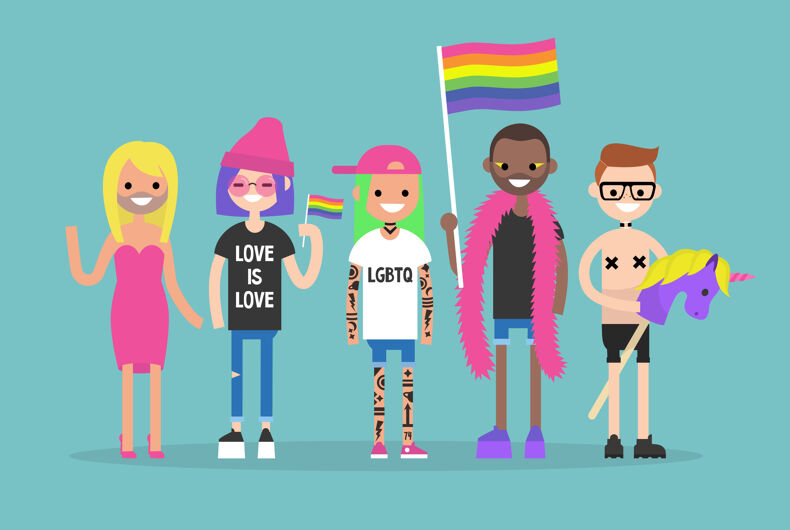 Dictionary.com recently added a slew of new LGBTQ-related terms to its lexicon. While the website worked with GLAAD to make English more queer-inclusive, the newly-added words may be unfamiliar to some readers.

So to help, we’ve defined a dozen of the new terms and provided examples to help keep your tongue queer and up-to-date – and we threw in a bonus word just for fun.

asexual (noun, adjective) – A person who is free from sexual desires or sexuality. Asexual people can feel degrees of sexual and romantic attraction towards others even if they’re generally disinterested in sex.

ace (noun, adjective) – An abbreviation for asexual. As a general word, ace also has the connotation of one capable of mastering expertise on their own or of standing out from the crowd as a maverick.

ambisextrous (adjective) – A slang term that can alternately mean bisexual, the state of being attracted to two or more genders; unisex, being used by or suitable for any gender; or having characteristics shared by male and female genders (especially sexual characteristics). For example: “Pat is pretty ambisextrous. They date men and women and they also look great in tight dresses or tailored tuxedos.”

deadname (noun, verb) – The previous name of someone who has changed that name, especially the pre-transition first name of a transgender person. Deadname can also refer to the act of calling a person (especially a trans person) by that person’s previous name, as opposed to their chosen or preferred name. Deadnaming someone is offensive and disrespectful, even when done accidentally or as a joke.

gender reveal – (noun, adjective) Public disclosure of the gender of an unborn baby by the soon-to-be parent or parents. Gender reveals often occur through cakes made with pink or blue filling, parties where parents presume gender based on their fetus’ sonar-imaged genitals, or by detonating deadly pipe bombs that kill family members and burn down 10,000-acre forests. The creator of gender reveal parties has told people, “Stop having these stupid parties. For the love of God, stop burning things down to tell everyone about your kid’s penis. No one cares but you.”

hodophobia (noun) – Not to be confused with “homophobia,” which is an aversion or hostility to, disdain for, or fear of gay sexual orientation or gay people, “hodophobia” actually refers to an irrational or disproportionate fear of traveling.

MeToo (noun, adjective, verb) – A social media hashtag and solidarity movement in which survivors publicly recount incidents of sexual harassment and assault to demonstrate the prevalence of such abuse. Kevin Spacey was one of the first gay celebrities to be MeTooed after gay actor Anthony Rapp publicly accused him of attempted statutory rape.

Pride (noun, adjective) – A celebration of a specific minority group and affirmation of equal rights for members of that community. One can attend their local Pride or wear some colorful Pride gear, but when uncapitalized, “pride” merely refers to one’s own sense of self-value or their conceitedly inflated ego.

trans+ (adjective) – Pronounced “trans-plus,” this word describes people with gender expressions outside of the traditional male-female binary. Trans+ people can include individuals who are transgender, genderqueer, agender, nonbinary, or other gender identities and expressions.