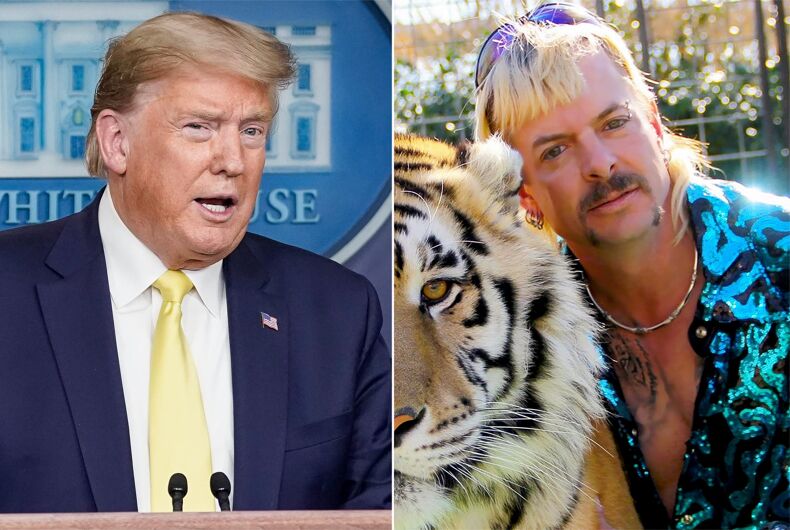 Rep. Matt Gaetz (R-FL) is a staunch supporter of Donald Trump. The congressman has emulated Trump’s belligerence and penchant for stretching the truth.

The bombastic congressman made waves, however, when he advocated for a presidential pardon for Joe Exotic, the gay former owner of a “roadside zoo” convicted of animal abuse who starred in the Netflix documentary Tiger King. And Exotic is so confident in his chances, he has a limo waiting on standby to pick him up from prison.

While other GOP officials are starting to abandon Trump, Gaetz has firmly remained in the president’s camp, falsely decrying non-existent voter fraud and promoting conspiracy theories that Democrats stole the election.

Over 80 million people voted for Joe Biden, but the president’s legal team and his congressional supporters have advanced wild claims in multiple states that allege everything from ballot stuffing to betrayal by Republican politicians in Georgia. He has sued in multiple states to try to overturn the results using dubious reasoning and has lost repeatedly.

But Gaetz seems to be accepting that Trump lost the election and his golden goose is getting cooked, caught between Republicans who want to return to democratic norms surrounding a change in leadership and Trump supporters who refuse to acknowledge the loss.

While Biden has said that he would not direct the federal government to investigate Trump’s multiple alleged crimes, he also pointed out that numerous investigations are already underway by “state and local” prosecutors.

“I will not do what this president does and use the Justice Department as my vehicle to insist that something happened,” Biden told NBC News’ Lester Holt. “What I’m focused on is getting the American public back at a place where they have some certainty, some surety, some knowledge that they can make it.”

Gaetz, however, noticed that Biden didn’t say those administration officials who blatantly broke federal law, sometimes taunting reporters while doing it, would also be off the hook. Multiple officials reportedly committed numerous ethical, financial, and administrative rules violations while in power.

With rumors swirling that Trump, who has used the presidential pardon power to benefit and protect his associates, is considering a pardon for his first National Security Advisor, Michael Flynn, Gaetz says Trump should wield the power ruthlessly until he leaves power. Flynn was convicted of lying to the FBI to cover up his involvement with Russian officials during one of the most bizarre court battles of the decade.

Gaetz supports a pardon for Flynn, but also thinks the president should preemptively pardon another supposed lawbreaker: Donald Trump. Oh, and Joe Exotic, the star of Netflix’s Tiger King documentary about the quirky gay criminal behind a roadside zoo and his ongoing feud with an animal rights activist. Exotic was convicted of animal abuse.

“President Trump should pardon Michael Flynn. He should pardon the Thanksgiving turkey. He should pardon everyone, from himself to his administration officials to Joe Exotic if he has to,” the GOP congressman said, referring to the star of the Netflix series “Tiger King,” who was convicted for animal abuse and a murder-for-hire plot.

“Because you see from the radical left a bloodlust that will only be quenched if they come after the people who’ve worked so hard to animate the Trump administration with the policies and the vigor and the effectiveness that delivered for the American people,” he continued. “So I think that the President ought to wield that pardon power effectively and robustly.”

Earlier this year, Exotic, who’s real name is Joseph Maldonado-Passage, sent a handwritten letter to the president begging for a pardon. Exotic has said he is a Trump supporter.

In April, Trump said he would “take a look” into Exotic’s case to see if he deserved a pardon. Exotic claims he was set up by his arch-nemesis, animal advocate Carole Baskin.

Rep. Matt Gaetz urges Trump to use his pardoning power "effectively and robustly" before he leaves office. pic.twitter.com/4pXu2fYBkQ